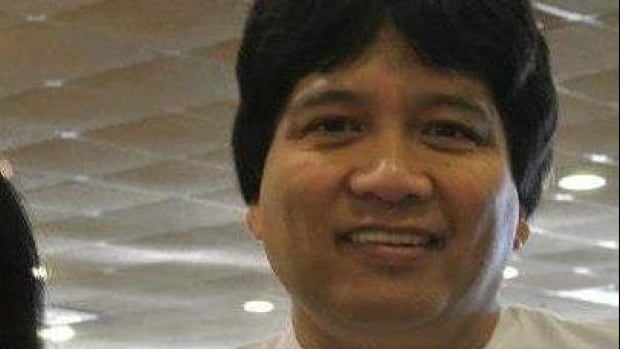 A jury has found a Manitoba man guilty of manslaughter in the presumed death of 59-year-old Eduardo Balaquit, who went missing nearly four years ago.

Kyle Pietz had pleaded not guilty to the charge of manslaughter.

The jury delivered its verdict in Manitoba Court of Queen’s Bench just before 8 p.m. on Wednesday, after beginning deliberations earlier in the day.

Seated in the front row of the courtroom, Balaquit’s family let out a sigh when the verdict was read by the foreperson of the jury, then hugged and held hands.

Balaquit was last seen on June 4, 2018, when he was working as a night cleaner at a business in Winnipeg.

He disarmed the building’s alarm code at 6:05 p.m. and was never seen or heard from again.

His body has never been found, and there was no DNA evidence linking Pietz to his death.

Over the course of the trial, which was presided over by Queen’s Bench Justice Sadie Bond and lasted close to a month, the Crown argued that financial desperation led Pietz to rob Balaquit, and that the 59-year-old was killed during that robbery. The Crown alleged that Pietz disposed of Balaquit’s body.

Prosecutors argued that Pietz badly needed cash as he was unemployed and owed creditors a significant amount of money.

However, defence lawyer Amanda Sansregret argued the Crown’s contention that Pietz killed Balaquit for financial reasons was nothing but a theory.

Court heard that Pietz worked until May 2018 at Westcon Equipment and Rentals, the same building as the victim.

Prosecutors alleged that weeks before Balaquit’s disappearance, Pietz stole $1,700 in cash from a lockbox at the business. Shortly after the theft, Pietz stopped showing up for work.

The Crown argued that financial desperation led him back to the business on June 4, 2018.

Prosecutors alleged that Pietz killed Balaquit during the robbery that night, then put his body into his SUV, covered it with boxes, and took it to a rural area outside the city.

No one testified that they saw the two together that evening. However, court heard that $700 had been withdrawn from Balaquit’s accounts, and that police found a Post-it note with Balaquit’s personal identification numbers in Pietz’s home.

Balaquit’s family testified he was a hard-working father whose life was full of consistency and routine.