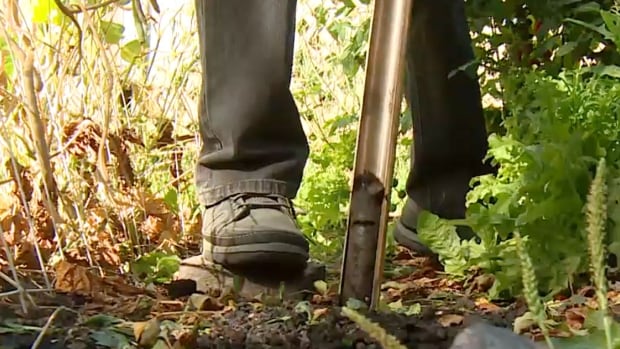 Soil samples from across Winnipeg show lead concentration levels are decreasing compared to samples from 2019, but one neighbourhood still has levels well above national guidelines.

The latest report, released Friday, was commissioned by the province of Manitoba as a followup to a 2019 study by Intrinsik, a health and environmental consulting company. That study identified areas within Winnipeg that may have elevated lead concentrations in soil.

The province hired the same company to conduct soil testing last year in order to identify areas where children may be at risk of lead exposure.

More than 2,000 surface soil samples were taken from higher-risk areas used by kids under the age of seven, including 200 public sites such as city parks, playgrounds and schools spread over 40 Winnipeg neighbourhoods.

Of the sites tested, 94 per cent came back with levels below national guidelines.

However, one site in the Mission Industrial area in St. Boniface came back with significantly higher levels, which were well above the acceptable amount.

One sample location, Mission Park, had an average level of 10,000 parts per million (ppm) — about 70 times the acceptable level, according to the Canadian Council of Ministers of the Environment Soil Quality Guideline, which is 140 part per million.

However, the report says because the area is not in the immediate vicinity of any homes, parks or schools, there is likely limited exposure for children, so it was not considered a priority for further investigation.

The province said it will work with the City of Winnipeg to address that concern.

The high levels in the Mission Park samples appear to be an outlier, with the next highest average level reported at Weston Memorial Community Centre, with 400 ppm.

The city said the affected areas at both sites are still accessible because the ground is frozen, which prevents toxins from leaching from the soil. It said the two areas will be closed off after consulting with the province, and once fencing can be installed.

Eight other neighbourhoods were identified as needing “further consideration,” based on the sampling results:

The province said in a news release that property owners where lead was above the national guidelines have been notified and they’ll be required to take steps to reduce potential exposure.

The health risk of exposure to lead in soil is low, the province says, but there are ways to help reduce exposure, including washing your hands after touching soil, especially before eating.

The province has recommendations on how to reduce exposure to lead on its website.

Lead levels in blood to be monitored

The 2019 study found that although the primary sources for lead contamination have been eliminated, the average predicted blood-lead levels for children in three Winnipeg neighbourhoods are higher than they should be. Children under the age of seven in Winnipeg’s Point Douglas and Weston neighbourhoods had concerning levels of lead in their blood, that report said.

Beginning this May, elevated lead levels in blood samples will be reportable to Manitoba Health on an interim basis so that significant sources of lead exposure can be identified, the province said Friday.

The province says lead exposure has declined significantly in the last 30 to 40 years after the removal of lead from gasoline, paint and other products.

All people are exposed to trace amounts of lead through air, soil, food, and drinking water. Children and fetuses are more sensitive to lead exposure than adults, and even low levels can have an effect on their behaviour and intellectual development.