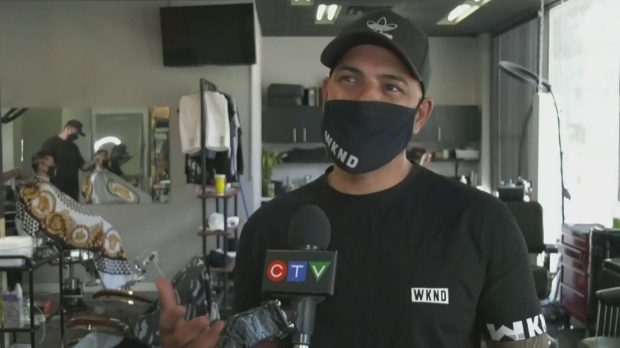 WINNIPEG — New public health orders came into effect on Saturday, allowing barbershops and salons to reopen at 50 per cent capacity.

It’s good news for The Weekend Hair Salon, which has been closed for almost two months.

Ali Aldulaimi, the owner of the salon, said when the new health orders were announced, he received close to 100 phone calls in four hours.

“Now we’re open for seven days a week for the first two weeks. (We’re) trying to cover all the clients and keep them happy, and hopefully business goes back to normal,” he said.

Aldulaimi said being able to resume business is a blessing, but reopening at 50 per cent capacity makes it challenging to schedule employees.

“My (staff) have kids, have houses, have bills to pay, (so) for me to tell them ‘ok he can work, he cannot work’ it’s hard for me,” Aldulaimi said.

Waltz On In Barber Shop is also opening its doors after a long hiatus.

Hugh Benham, a barber at the shop, said being off work for seven of the last 14 months has been tough, and is happy to see the restrictions loosened.

“I would always prefer a little more notice so I can get my schedule organized and confer with my colleagues, and make sure that we’re able to get this running in a way that we want to get it running,” said Benham.

Thanks to high vaccination rates, the loosened restrictions were put in place ahead of the July 1 milestone outlined in Manitoba’s 4-3-2-One Great Summer Reopening Path.

Manitoba will reach its second milestone in the summer reopening plan when 75 per cent of all Manitobans age 12 and above have received their first dose of the vaccine, and 50 per cent have had their second dose.

“The reality is many businesses are still limited to just 25 per cent occupancy. Many are still going to be losing money every single day they’re open,” said Jonathan Alward, Director of the Prairie Region for CFIB. “I’ve heard from several business owners already that aren’t even opening because it will probably cost them more money at this level.”

Alward said Manitobans need to continue following all the provincial guidelines to hit milestones two and three ahead of schedule.

In the meantime, Aldulaimi feels bad for other businesses that weren’t able to stay afloat during the closures.

“My father always taught me, when you look at other people’s problems, your problems become nothing, so I’m very blessed and glad I’m back in business,” he said.