The stolen fire truck that was taken on a joyride across the city last week is now out of commission, joining a dozen other WFPS vehicles which are out of service due to corrosion from road salt. (Tyson Koschik/CBC)

Losing a fire engine after it was stolen and damaged last week in a wild chase through the city’s downtown is putting more stress on the Winnipeg Fire Paramedic Service fleet.

The loss of the engine comes as a dozen trucks are out of service due to corrosion problems.

The WFPS is looking at how it might increase security on its vehicles after the pumper was stolen last week. A 36-year-old man was arrested after spike belts stopped the truck at Assiniboine Avenue under the Midtown Bridge, following a police chase that wound through downtown Winnipeg.

The vehicle was stolen on Henderson Highway while crews attended a call.

Chief John Lane told reporters Wednesday he was “horrified” by the incident and is taking “every reasonable precaution” the WFPS can to make sure the incident isn’t repeated.

“We are looking into ways of making sure the units are secure as possible,” Lane said after a finance committee meeting at city hall.

Lane acknowledged the WFPS is reviewing upgrades to the anti-theft devices on its vehicles, but cautioned any retrofit could be expensive. He said leaving a crew member at vehicles could compromise safety for crews and potential patients.

“One has to look at the frequency with which this occurs — it’s not very frequent, thank heavens,” he said.

The stolen fire engine was damaged in the chase and is out of service. That puts more strain on an already taxed fleet, Lane told councillors. A dozen WFPS vehicles are out of commission as road salt used on Winnipeg streets in the winter is corroding their frames.

Lane says the problem is not Winnipeg’s alone.

“So this is a problem nationwide and certainly on the other side of the border as well. Anywhere where we see winter conditions that the apparatus have to operate in, we see these these sort of corrosion problems popping out,” Lane said.

Lane says the manufacturer has had trouble coping with the backlog of repairs. 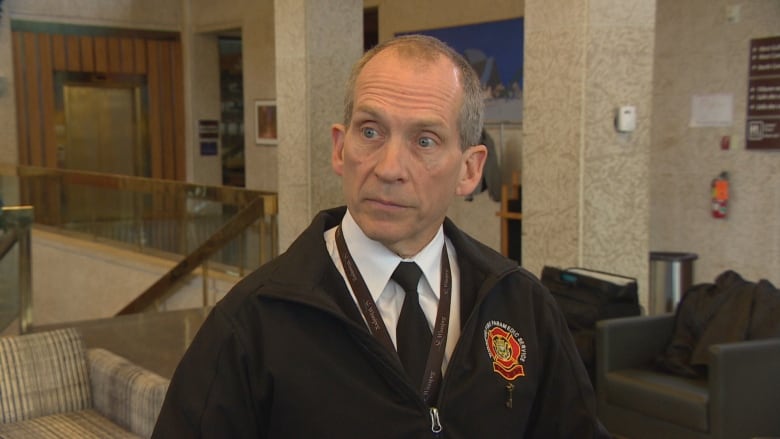 In the meantime the WFPS has a rotating pool of vehicles that Lane says “are filling the gap.”

The maintenance issues, combined with extra overtime and salaries, contributed to the WFPS asking for and receiving $1.1 million from the finance committee above its budget for this year.

Finance chair Scott Gillingham says he accepted Lane’s explanation for the cost overruns and noted they were below similar requests in each of the last several years.

Lane told the finance committee it was structurally difficult to hold the line on some overtime because the service runs four shifts, 24 hours a day, which works out to 42-hour work weeks for staff, automatically creating an overtime requirement.

Lane told councillors the only way to reduce overtime costs completely would be to hire more firefighters — a move which creates more added costs.