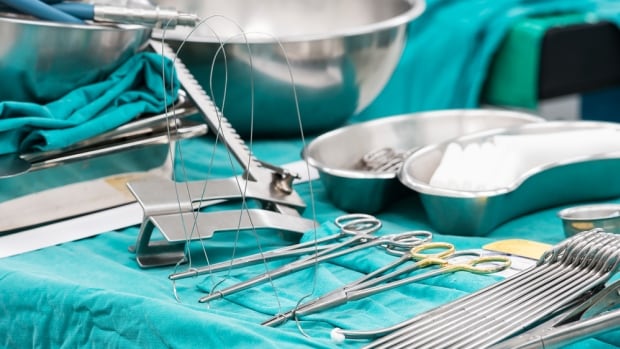 Orthopedic surgeries at Winnipeg’s Concordia Hospital are being boosted through the addition of another operating room, as the Manitoba government says it is working to shrink the backlog of surgical and diagnostic procedures in the province.

As part of the expansion, another orthopedic surgeon will be recruited by the province, Health Minister Audrey Gordon said at a Wednesday morning news conference, where the task force assigned to tackle Manitoba’s backlog of postponed procedures gave an update on its progress.

As well, four in-patient beds will be added and anesthesia staffing will be increased at Concordia, Gordon said at the announcement at the Concordia Hip and Knee Institute.

The northeast Winnipeg hospital is the province’s leading site for joint replacement surgeries. But a significant number of patients have been forced to wait for their procedures as staff, beds and other resources were re-allocated for the pandemic response.

The improvements are expected to increase capacity by up to 1,000 surgeries per year but are not expected to be in place until the end of the year.

“The number of surgeries is well behind here for this year, but what we’re talking about with the additional 1,000 [is] after we are back to baseline [levels],” said Dr. Peter MacDonald, chair of the task force’s steering committee.

That means “not just going back to baseline,” but adding surgeries, he said.

“As an orthopedic surgeon, I know the profound benefits that hip and knee surgeries can have on a person’s quality of life and overall health, so that is a particularly meaningful initiative to see moving forward.”

The province is also purchasing a new mobile unit for CT scans and two new mobile MRI units to reduce wait times for diagnostic procedures. The units will be able to deliver more than 11,600 CT scans and 7,200 MRIs annually, according to a news release from the province.

No information was given on when they would become operational.

Similarly, the province announced that services at Misericordia Health Centre’s cataract program are being expanded, but said nothing about how or when.

“We promise to update you next time around,” MacDonald said.

The Spine Assessment Clinic in Winnipeg is getting $400,000 to add four physical therapists and increase the number of assessments for about 900 people living with back pain, Gordon said.

About 90 per cent of patients referred to the assessment clinic can be helped through treatments other than surgery, such as physiotherapy and chiropractic care, Gordon said.

Those extra staff members should be in place in the coming months, with a goal of reducing the wait list for spine assessments by next spring.

A pilot project with Sanford Health in North Dakota is now well underway, with nine Manitobans having received spinal surgery there to date and more being scheduled in the coming weeks, the province said.

“This will happen over months. This isn’t a thing you should expect to see really happen in a day. We’re trying to manage this in a very safe way for the patients.”

The creation of the diagnostic and surgical recovery task force was first announced in November, when the province’s backlog was estimated at 130,000 procedures.

Since then, however, the backlog has swelled to almost 168,000 procedures, Doctors Manitoba said last week.

The advocacy organization has been keeping track of the various backlogged procedures on an online dashboard, updating it monthly.

While Doctors Manitoba has applauded the implementation of a task force, it has repeatedly urged the province to be more transparent about the team’s efforts, including setting target dates to clear the backlogs and providing comprehensive, monthly reporting to monitor that progress.

MacDonald said the task force doesn’t entirely agree with the numbers compiled by Doctors Manitoba. The task force is working with the doctors group to try to verify those numbers, he said.

“We both acknowledge that there’s pitfalls in the methodology on both sides,” he said, noting wait times may be a more important metric to patients than a broad number representing the backlog.

“When you look at the backlog numbers, they’re very daunting. And then when you talk to the front lines, you get a different story in some areas,” MacDonald said.

Asked what current wait times are, MacDonald said “there’s a huge spectrum of procedures” and varying urgency levels. The task force “has a good idea” on average wait times for most procedures but it would take some time to gather that.

He acknowledged that should be included on the provincial task force website, which is outdated and currently being upgraded.

Dr. Ed Buchel, the surgical lead on the task force steering committee, said the group is creating a surgical wait list management system that will give patients answers on how many people are on the wait list and how long their wait will be.

“We are not trying to hide anything. There is nothing, from a surgical program, that I wouldn’t like to do more than to share real data,” he said. “This is a fundamental, basic thing that our system needed.”

Without such an information management system it is a best guess, “and that’s translated into the Doctors Manitoba numbers versus our numbers,” Buchel said.

Earlier this month, the task force reported that the number of surgeries and diagnostic procedures done each week at a number of Manitoba hospitals has been gradually rising as staff return to their regular assignments from caring for COVID-19 patients.

Currently, 146 staff members remain reassigned or redeployed — the lowest number since the peak of the third COVID wave in July 2021, Gordon said Wednesday.

“We hope to have everyone returned by the end of April,” she said.

The task force aims to get all wait times back to 2019 levels. There isn’t yet a target date for that, but the province is making “incredible strides” and the latest initiatives “are laying the groundwork for more improvements to come,” MacDonald said.

Gordon noted that endoscopy services and bariatric surgeries are examples of procedures that were fully restored to pre-pandemic levels as of last week.

There are also plans to staff many sites at 75 to 100 per cent of surgical capacity over the summer, a time when surgical slates typically drop to about 40 per cent, she said.

That equates to 200-250 surgeries over the summer months, she said.

The Opposition NDP and the Liberals reacted harshly to the update, saying it falls short of offering any confidence.

“If you’re a Manitoban who has been waiting for a life-altering surgery, potentially a life-saving surgery … or a really important diagnostic test, unfortunately, today you didn’t get an answer as to when your surgery or test is going to be available,” said NDP health critic Uzoma Asagwara.

The Progressive Conservative government has resources at its disposal — and a responsibility — to set an end date for clearing backlogs, but “they refuse to do it,” Asagwara said.

“They don’t want to be accountable to their own decision-making and responsibilities.”

“It’s hard to believe, but the PCs aren’t even trying to fix what they broke. They want to go back to 2019 wait list levels, which were already bad and had been getting worse for three years straight due to PC cuts,” he said in a statement.

“This is nowhere near good enough.”

The president of Doctors Manitoba was more encouraged by the government’s announcements.

in a statement, Dr. Kristjan Thompson called the measures “concrete steps” in the right direction but only a beginning to “much more work and investment [that] will be needed to clear the massive surgical and diagnostic backlog.”

(262)
$12.99 (as of May 23, 2022 12:26 GMT -05:00 - More infoProduct prices and availability are accurate as of the date/time indicated and are subject to change. Any price and availability information displayed on [relevant Amazon Site(s), as applicable] at the time of purchase will apply to the purchase of this product.)

(1232)
$19.99 (as of May 23, 2022 12:26 GMT -05:00 - More infoProduct prices and availability are accurate as of the date/time indicated and are subject to change. Any price and availability information displayed on [relevant Amazon Site(s), as applicable] at the time of purchase will apply to the purchase of this product.)

(77281)
$15.09 (as of May 23, 2022 12:26 GMT -05:00 - More infoProduct prices and availability are accurate as of the date/time indicated and are subject to change. Any price and availability information displayed on [relevant Amazon Site(s), as applicable] at the time of purchase will apply to the purchase of this product.)

My Evil Mother: A Short Story

(11112)
$2.55 (as of May 23, 2022 12:26 GMT -05:00 - More infoProduct prices and availability are accurate as of the date/time indicated and are subject to change. Any price and availability information displayed on [relevant Amazon Site(s), as applicable] at the time of purchase will apply to the purchase of this product.)

(51)
$166.12 (as of May 23, 2022 12:26 GMT -05:00 - More infoProduct prices and availability are accurate as of the date/time indicated and are subject to change. Any price and availability information displayed on [relevant Amazon Site(s), as applicable] at the time of purchase will apply to the purchase of this product.)