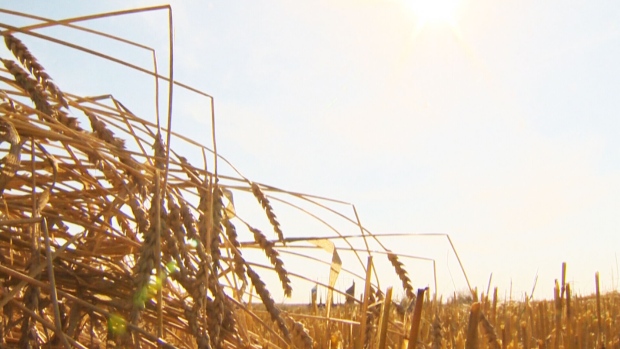 WINNIPEG — High heat mixed with the lack of precipitation has caused some problems for farmers in Manitoba.

The R.M. of St. Laurent showcased how real the struggle has been as a state of agricultural disaster was declared on Monday, with the R.M. saying moisture accumulations are less than 40 per cent compared to normal.

It also cited an infestation of grasshoppers is compounding the lack of forage.

With the current problems, the R.M. is asking for help through provincial and federal programs.

Bill Campbell, the president of Keystone Agricultural Producers, said there have been several factors that have developed since last fall.

“We’ve probably seen it start around August time, relatively dry going into freeze-up last year and then very limited snowfall and virtually no run-off and no spring rains,” said Campbell.

He said even if there is some precipitation throughout the rest of the growing year, it doesn’t appear it will help much.

“I believe some of the weather-influenced issues cannot be fixed at this point in time. There is bound to be irreversible damage done to some of the crops.”

Campbell added with the current conditions, there is a chance farmers will have to harvest early, which he says is not an ideal situation.

“When we see premature ripening of a crop, it’s not necessarily a good thing because it generally indicates a reduced yield and there’s not as much there.”

Another concern with the lack of precipitation is how it affects livestock in the summer.

Campbell said dugouts and other water sources didn’t refill to the same levels, which has meant less water for animals such as cattle.

He added cattle can drink up to 10 gallons of water a day.

“You run a herd of cows, that’s significant on the amount of water that they need access to.”

He said when water levels are lower than normal, it can also lead to unsafe drinking water in some cases where algae may form.

When there isn’t enough water, Campbell said farmers have to take steps to ensure they can properly take care of their herd, which at times means selling off cattle.

“We’ve seen that in other areas, we’ve seen it happening other years and starting to this year. There’s different options available, but they’re not necessarily comfortable options or not without expense either.”

Even during the tough times, Campbell said farmers will always find a way to persevere and said people shouldn’t be afraid to ask for help because they are all in this together.