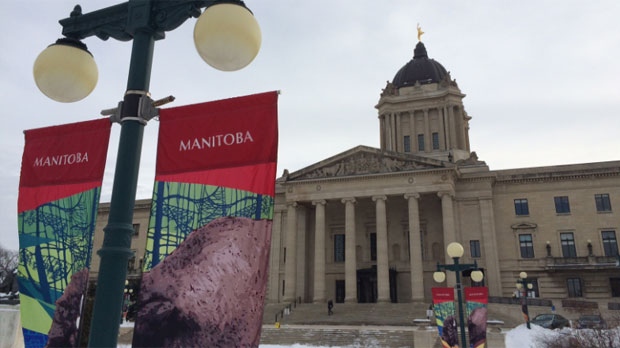 The Manitoba government announced its proposed 2022 budget on Tuesday, with a focus on recovering from the pandemic and preparing for a better future.

Finance Minister Cameron Friesen said there are five key areas the government is focused on in the Recover Together budget.

The categories include improving health-care, making life for Manitobans more affordable, building the economy, investing in communities, and protecting the environment.

“Two years of the pandemic have forced Manitobans apart, shaken our families and damaged peoples’ livelihoods – now it is time to look ahead,” Friesen said in a news release.

“Budget 2022 implements our plan to recover together and is built to take action on the issues Manitobans care about. Budget 2022 strengthens, invests, and builds our province, and gives Manitobans hope and optimism for the future.”

The government plans on spending $19.9 billion on the 2022 budget which is up from 2021, but they are expecting to reduce the province’s deficit as revenue is projected to increase for the fiscal year. The province is projecting a deficit of $548 million which is an improvement from the forecast deficit of $1.4 billion at the end of the 2021 fiscal year.

The government said it plans on once again having a balanced budget by 2028/29 and plans on doing it in a similar way to how they balanced the budget in 2019/20.

One of the top goals for the government is to address the ongoing health-care concerns as the province is earmarking $7.2 billion for all health-care sectors.

The budget is set to include $110 million to deal with the surgical and diagnostic backlog that accumulated during the COVID-19 pandemic with no date set to address the backlog.

The money will be used toward increasing capacity, working with front-line workers and the community to develop solutions and apply any innovations that are found locally and globally.

There is also $11.6 million going toward creating 260 new nursing seats for this year.

Another $9 million is being used for 28 additional ICU beds to help increase capacity.

Ongoing funding for COVID-19 response has a chunk of money going toward Cadham Provincial Laboratory. The money – $4.2 million – will be used for COVID operations and the lab will also be able to hire 18 new full-time employees.

The mental health of Manitobans is also an important point for the government, as $17 million is being used to start a five-year plan for mental health and community wellness in the province.

An additional $23.7 million will be used toward mental health and addictions programs to help recover from the pandemic. The money will focus on universal supports, a child and youth complex, and mental health, addictions and trauma support.

There will be a central fund of $630 million that is allocated for ongoing COVID supports, recovery and other contingencies and it will be handed out to ministers as required.

Friesen said the cost of food and fuel has risen for Manitobans due to supply chain issues and the government is looking to combat that by making life more affordable in other aspects.

As part of that, the Education Property Tax Rebate will be increasing to 37.5 per cent in 2022 and 50 per cent in 2023 with the province saying it will save the average homeowner $1,355 over that two-year period.

Renters in the province will also experience some savings as the Residential Tax Credit is being expanded to 45,000 households and savings will be up to $525 for renters every year.

The eligibility is also being expanded for the Child Care Subsidy Program, which costs $10 a day per child for regulated child-care facilities.

The province is putting $12 million toward income-support programs for people with severe and prolonged disabilities.

Drivers will also receive a break on registration fees with the province saying Manitobans will save $15 million a year.

As the province continues to rebound from the pandemic, the government said it has been working hard to rebuild the economy.

Helping small businesses will be on the province’s agenda for years as the Small Business Venture Capital Tax Credit is being made permanent and it is also being expanded to support venture capital funding.

The government is also launching a Venture Capital Fund that will have a $50 million investment to start.

The tax payroll is also being decreased for 970 businesses throughout Manitoba.

To ensure the economy continues to grow, the government is investing $5 million to entice newcomers to come to Manitoba.

Front-line workers in parts of the social work sector will also see wages improve through an $18 million investment.

When the province looks at investing in the communities, a focal point is Manitoba’s future – children.

With that, the government plans on creating 716 spaces in new child-care centres as well as helping 50 home-based facilities in the next year.

They will also invest $326 million over the next two years so parents can make child-care more affordable and accessible.

New schools are also being planned with the government wanting to see 22 new schools by 2027. The province said 10 of those schools will be open or at least under construction by the end of 2022/23.

There will also be $550,000 to invest in mental health support for students as well as teachers and other staff.

Reconciliation with First Nations communities is also being touched on as a new Indigenous Reconciliation Initiatives Fund is being created which will be focused on Indigenous initiatives. In the next fiscal year, the government plans to put forward $5 million to advance progress on reconciliation.

Other investments in the community include $34 million supporting arts, culture and sports organizations. It’s part of a three-year $100 million investment.

There is also a $10.3 million investment to improve the Building Sustainable Communities Program which brings the total to $25 million for 2022/23.

Manitoba will also put $578.5 million toward capital projects for highways including those projects that are part of the Manitoba Restart Capital Program.

Looking at protecting the environment, the province is investing $1.5 million to expand the Conservation and Climate Fund, which is part of a $6 million investment for 12 initiatives part of the province’s Climate and Green Plan.

Forestry programs are getting $10 million, while another $14 million is going to provincial parks.

Orphaned and abandoned mine sites will see rehabilitation over the next two years thanks to a $50 million investment.

Enhanced flood protection will be worked on for the Lake Manitoba and Lake St. Martin Outlet Channels Project as the government will provide over $100 million for the project.

The government also wants to develop the Energy Policy Framework and also a multi-year parks capital strategy to improve campgrounds, roads, trails and other infrastructure.

(48)
$43.99 (as of May 23, 2022 12:26 GMT -05:00 - More infoProduct prices and availability are accurate as of the date/time indicated and are subject to change. Any price and availability information displayed on [relevant Amazon Site(s), as applicable] at the time of purchase will apply to the purchase of this product.)

(3247)
$6.50 (as of May 23, 2022 12:26 GMT -05:00 - More infoProduct prices and availability are accurate as of the date/time indicated and are subject to change. Any price and availability information displayed on [relevant Amazon Site(s), as applicable] at the time of purchase will apply to the purchase of this product.)

(1965)
$10.49 (as of May 23, 2022 12:26 GMT -05:00 - More infoProduct prices and availability are accurate as of the date/time indicated and are subject to change. Any price and availability information displayed on [relevant Amazon Site(s), as applicable] at the time of purchase will apply to the purchase of this product.)

Alone With You in the Ether

(703)
$16.31 (as of May 23, 2022 12:26 GMT -05:00 - More infoProduct prices and availability are accurate as of the date/time indicated and are subject to change. Any price and availability information displayed on [relevant Amazon Site(s), as applicable] at the time of purchase will apply to the purchase of this product.)

(51)
$166.12 (as of May 23, 2022 12:26 GMT -05:00 - More infoProduct prices and availability are accurate as of the date/time indicated and are subject to change. Any price and availability information displayed on [relevant Amazon Site(s), as applicable] at the time of purchase will apply to the purchase of this product.)