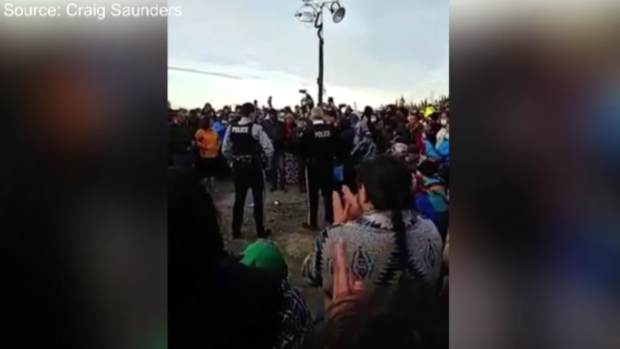 WINNIPEG — Manitoba Hydro’s multi-billion dollar hydroelectric project has moved into a “care and maintenance” status due to a blockade made by members of the Tataskweyak Cree Nation.

The decision to have only essential personnel at the Keeyask project was made Thursday night.

In a statement to CTV News, Manitoba Hydro said, “It became clear the illegal blockade was impacting the safety of those at the site and their wellbeing by blocking shipments of food, waste removal and other critical supplies for employee safety and wellbeing.”

Under the care and maintenance status, 100 people will stay at the site to provide security and to maintain critical camp operations.

On March 21, about 700 workers volunteered to stay at the Keeyask site for eight weeks.

Manitoba Hydro planned to have a shift change on May 19, bringing in around 1000 new workers.

Tataskweyak Cree Nation members created a lockdown days before the change, blocking the road to the Keeyask site over concerns that the workers would bring COVID-19 into their community.

As per provincial health orders, southern Manitobans are not allowed to cross the 53 parallel, but Manitoba Hydro received an exception. It created the shift change plan in partnership with Manitoba Health and the Chief Medical Officer.

The Manitoba Court of Queen’s Bench granted Manitoba Hydro an injunction on May 18.

On the evening of May 20, RCMP announced it would be serving an injunction order to the Tataskweyak Cree Nation members who formed the blockade on PR 280, the highway leading to the Keeyask site.

The injunction orders Tataskweyak Cree Nation to end the blockade, which went up on Friday.

As of Saturday morning, the blockade is still there.

Both Manitoba Hydro and RCMP said they are in communications with the First Nations.

According to Manitoba Hydro, the blockade costs the company $1.7 million per day, plus a one-time fee of $50 million for demobilization and remobilization.

-With files from CTV’s Kayla Rosen and Charles Lefebvre