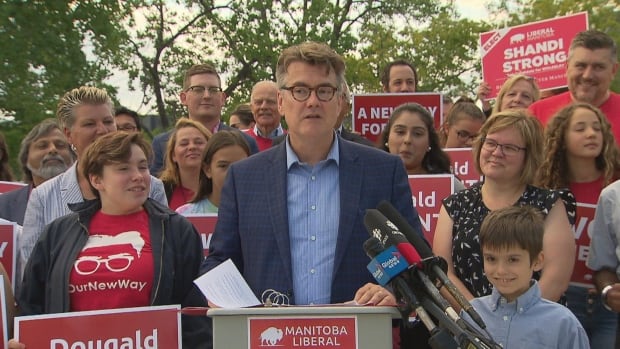 The Manitoba Liberals officially launched their provincial election campaign, emphasizing they are the green choice if Manitobans want to “cancel the apocalypse.”

Leader Dougald Lamont re-announced his party’s green plan on Tuesday afternoon, adding in a new initiative to get more Manitobans to plant trees.

The 25-page report was first released in May. It detailed how Manitoba could become carbon neutral by 2030 by offering incentives to go green and restoring wilderness habitats.

“We have to act and it is our responsibility to do this and we have a window to do it in,” Lamont said Tuesday. “There are people who say it is not just the next 12 years that are important, it is the next 18 months. We have to put measures into action right now.”

Part of the plan would see six million more trees planted by getting every Manitoban to plant five trees. He would encourage this by providing the saplings for free.

The announcement was billed as the party’s official campaign launch.

Lamont says it is an issue his party takes seriously. He described a recent incident where his young son woke him up in the middle of the night because he was afraid of climate change.

“I am lucky because as a parent I could turn to him and tell him, ‘It’s OK, we have a plan to save the world,'” he said.

“Another way of putting it, is that we are here because we want to cancel the apocalypse.”

The full cost of the Liberals’ green plan wasn’t announced, but Lamont said it would be covered by revenue from the carbon tax.

Lamont says if he’s elected premier, his party would stick with its federal counterparts’ carbon pricing plan, but would renegotiate how the money is spent. The aim would be for lower-income people to receive larger carbon tax rebates.

As a result, Ottawa imposed its carbon pricing scheme on Manitoba in April, which will see the carbon tax gradually rise to $50 per tonne by 2022.

Manitobans head to the polls on Sept. 10.