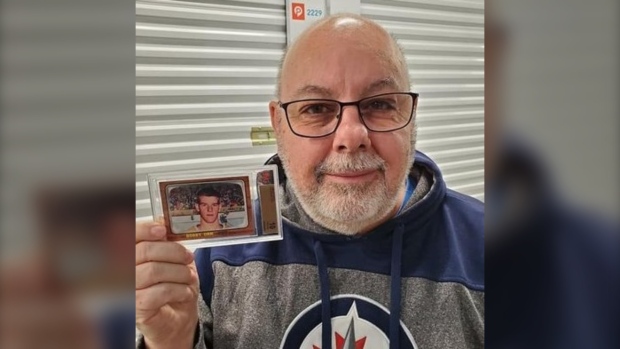 WINNIPEG — A Manitoba man has put a one-of-a-kind Bobby Orr rookie hockey card up for auction, hoping it will surpass the million-dollar mark and become the most expensive hockey card ever sold.

He said he picked up the card six or seven months ago from someone he knew who wanted to sell it. Hunt wouldn’t exactly reveal what he paid for the card, but said it was in the six figures.

Collecting cards, trading, buying and selling were something Hunt started back in the late 1980s until the market crashed in 1997. He returned to the hobby in 2015. The inspiration, he said, comes from his love of hockey.

“I played when I was younger and all the way up through my adult life, so I’ve always loved hockey. I watched Hockey Night in Canada back in the ‘60s and ‘70s, so hockey’s always been there and it’s great to see the people you watched back then on cards,” said Hunt.

Bobby Orr was a special player, Hunt said, changing the way the game was played.

“He’s the best defenceman to ever play the game. He revolutionized how defencemen play the game and it paved the way for guys like Paul Coffey to come along and play the same way,” said Hunt. “Defencemen were now allowed to go forward and be part of the offence.”

The card is mint and rare, owing to a smaller production run back when it was printed.

“If you compare it to the Gretzky (rookie card), there’s probably hundreds to a thousand times more Gretzky rookies that were printed compared to Topps’ Bobby Orr,” he said.

The card’s rarity is under investigation but isn’t being contested, according to Hunt. He believes it is the only one in perfect condition in existence. According to the Beckett website, a company that grades sports cards, there are two Bobby Orr cards, but the listings may be duplicates of the same card. Results from the investigation should be released next week.

The current record-holder for most expensive sports card sold at auction is a Wayne Gretzky rookie card which recently sold for $1.2 million and Hunt believes his Orr card could go for more.

“If you take any other grade, so say six of a Gretzky and six of a Bobby Orr, the Bobby Orr always beats the Gretzky two to one, so theoretically it should pull in $2 million,” he said.

Hunt does own many sports cards, but said the loss of his collection’s crown jewel will be felt. However, he still does own another Bobby Orr rookie card albeit only graded a seven.

“I’m kind of like a picker,” he said, “I’m out there trying to dig them out of basements. A lot of times people don’t even know they have them, and they happen to see an ad that I run, and say, ‘Hey, I think we have some of that.’”

As for his next plans, Hunt said he is turning to baseball.

“I’ve always been after the Mickey Mantle rookies, and they’re hard to get,” he said. “I’ve found 23 of them over the years, so I would like to find another high-grade Mickey Mantle card. (That) would be nice.”