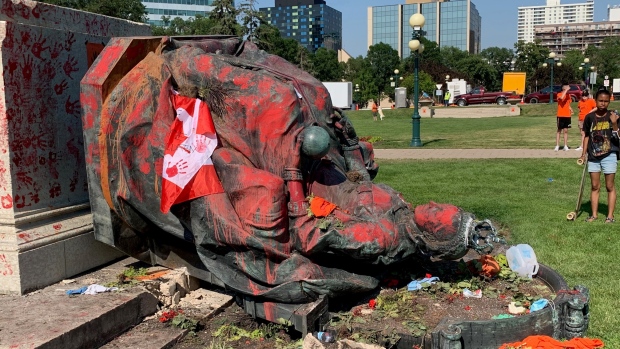 WINNIPEG — Statues of two queens that were torn down by protesters on the Manitoba legislature grounds will be rebuilt, Premier Brian Pallister said Wednesday.

“Tearing down is a lot simpler than building up,” Pallister said at his first news conference since the statues were pulled down on Canada Day.

He added that he felt “disgust and disappointment” at the vandalism.

“I believe that Canada has been, and will always be, I hope, a nation that is an example to those around the world of our dedication to building.”

The statues were tied with ropes and hauled to the ground during a demonstration over the deaths of Indigenous children at residential schools.

The statue of Queen Victoria, larger and placed prominently near the main entrance to the legislature grounds, had its head removed. The head was recovered the next day from the nearby Assiniboine River.

A smaller statue of Queen Elizabeth located close to the lieutenant-governor’s residence was toppled but left largely intact.

Assessments of the damage are ongoing, Pallister said.

The statue of the current Queen is to be put back in the same place, he said, but the one of Queen Victoria may end up in a different spot on the legislature grounds and its wording may be updated to help people “in understanding more fully the history as it’s been interpreted by modern view.”

“That’s a consultative process we’re going to continue,” the premier said. No one involved in the destruction of either statue will be part of the consultation, he added.

The Progressive Conservative government promised last year to erect a statue of Chief Peguis to commemorate his signing of the first treaty in Western Canada in 1817 granting land along the Red River to settlers. It would be the first statue of a First Nations person on the legislature grounds.

Pallister said the plan has always been to update some of the language used on monuments so that they more accurately reflect history.

Pallister’s remarks on Canada’s history, however, were criticized.

The Assembly of Manitoba Chiefs called the comments abhorrent.

“To minimize, romanticize and celebrate the settler colonialism that displaced First Nations from their ancient and sacred lands in the most brutal and heinous ways, the way he did in his comments, is unconscionable and a desecration to the graves of the ancestors on which the legislature is built and on which the City of Winnipeg now lies,” interim Grand Chief Leroy Constant said in a prepared statement.

Nahanni Fontaine, who is Indigenous and the justice critic for the Opposition New Democrats, said Pallister was revising history.

“Reconciliation is impossible when you have a settler at the helm denying, romanticizing and minimizing colonization,” a message posted on Fontaine’s Twitter feed said.

“Canada was forged in the blood of our Peoples, on the bodies of our women and children, and in the theft of our lands.”

Liberal Leader Dougald Lamont said in a prepared statement that Pallister’s remarks were shameful and tone-deaf.

“This is the hard truth: Canada’s prosperity was built on Indigenous suffering and an indifference to Indigenous lives and rights.”

This report by The Canadian Press was first published July 7, 2021.