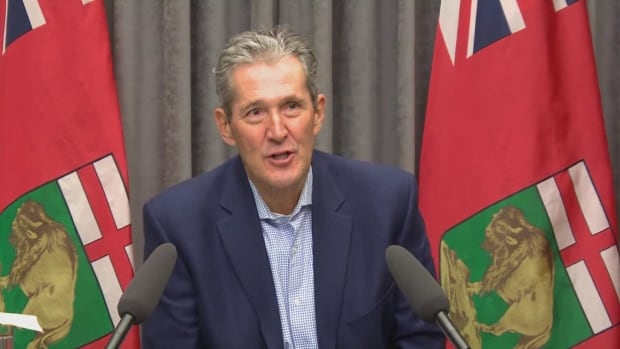 Manitoba Premier Brian Pallister said Saturday the government will declare a state of emergency as the province deals with a major snowstorm. (CBC)

Premier Brian Pallister will declare a state of emergency after receiving a request from Manitoba Hydro, as a major snowstorm creates havoc across the southern portion of the province.

Pallister gave the update on the provincial response to the storm on Saturday afternoon in an address at the Manitoba Legislature.

“I have spoken to Manitoba Hydro. They have officially made a request to declare a state of emergency which would give them additional powers to access resources, supplies, materials that they need at various descriptions in order to restore power as quickly as possible,” the premier said.

“We’ll be proceeding to grant that request… to bring about the ability of Manitoba Hydro to proceed more rapidly.”

The province’s co-ordinated emergency centre has escalated to Level 3 — a “heightened level of concern,” Pallister said.

BREAKING: Manitoba Premier Brian Pallister says the province will be declaring a state of emergency after getting a request from Manitoba Hydro. The province is dealing with numerous problems from the storm. The premier says some areas still won’t have power for days. <a href=”https://twitter.com/hashtag/cbcmb?src=hash&amp;ref_src=twsrc%5Etfw”>#cbcmb</a>