The federal government previously extended the timeline for the approval of the Manitoba-Minnesota Transmission Project until Friday. It has now approved the project. (Chris Seto/CBC) See la shot of hydro line tower with blue cloudy sky above. (Chris Seto/CBC)

The Manitoba Progressive Conservative Party announced Saturday it will offer millions to Manitobans in the form of rebates to help offset the costs of building energy-efficient retrofits of existing homes and commercial buildings.

If re-elected in the 2019 provincial race, the party will invest $25 million each year so homeowners and business executives can make more energy efficient renovations, according to Rochelle Squires, the party’s candidate for Riel.

“Our guarantee to Manitobans is that we will support them in making their homes and buildings more energy efficient,” Squires said during a Saturday press conference.

“Retrofits will make our buildings more energy efficient, reduce emissions and create jobs for hardworking Manitoba tradespeople that will carry out these renovations,” she said.

The retrofit program would be carried out by Efficiency Manitoba, the province’s new crown corporation focused on energy conservation, which was created to take over Manitoba Hydro’s Power Smart program. 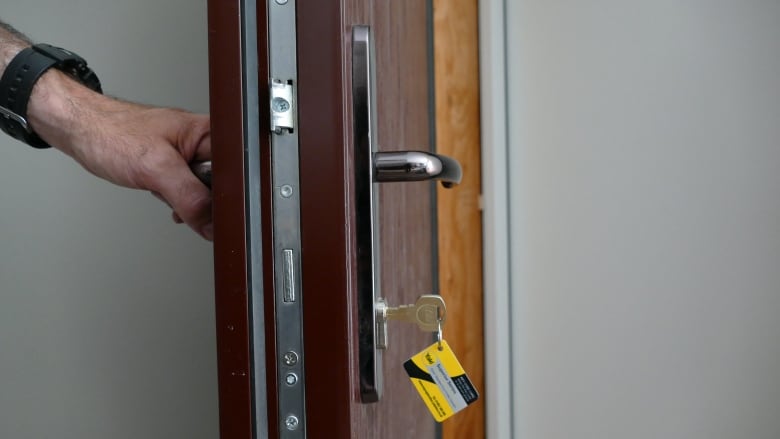 The 70 mm door with latches all around the edges has an extra tight seal. (Lyzaville Sale/CBC)

It would reduce greenhouse gas emissions by 135,000 tonnes over the next three years — the equivalent of removing 27,000 cars from roads or planting 9 million trees — out of a total one million tonnes, or one mega-tonne, the party promises to eliminate by 2023, she said.

According to a June 2019 report on carbon savings — submitted to the province’s minister of sustainable development by an expert advisory panel — Manitoba is the sixth largest greenhouse gas emitter compared to other provinces, making up three per cent of emissions in the country. The report indicates the province is on track to increase emissions unless it takes specific reduction actions.

Manitoba Green Party Leader James Bedomme questioned the timing of his opponent’s announcement. “[The Progressive Conservatives] have done nothing on this in three years of government,” he said.

“Moreover, the PCs do not plan to reduce emissions at all,” added Beddome in a nod to a section on 2015 reference numbers in the report that suggests emissions could increase from 21.7 mega-tonnes of carbon dioxide equivalents in 2019 to 22.6 mega-tonnes in 2023.

To address what it calls a “climate crisis”, the Greens have proposed creating greenhouse gas reduction targets; pricing pollution at $50 per tonne which would increase by $10 each year; and investing in green energy, transportation and agriculture across sectors to transition away from fossil fuels and reduce greenhouse gas emissions.

While the Manitoba Liberal Party did not respond to the PC’s announcement, the Manitoba NDP joined the Greens in criticizing the blue party’s track record. 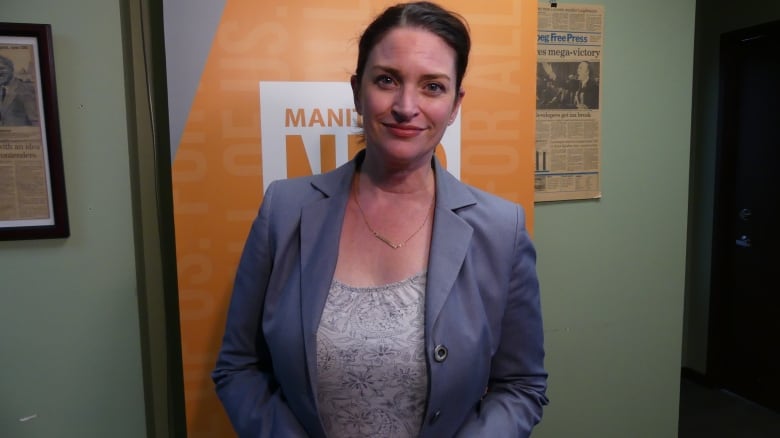 Erin Sleby, an NDP spokesperson who is not a candidate in the upcoming 2019 provincial elections, said the Progressive Conservative have a weak record on environment and climate change during a news conference in reaction to the PC’s announcement on energy efficient retrofitting. (Walther Bernal/CBC)

“He cut the advertising to the efficiency program that had been incredibly successful” which has directly resulted in 25,000 less people signing up for the program in the province, Selby said, in addition to cutting the province’s CO2 emission targets in half under the current government.

“He says one thing and he does another. He does not have a track record of caring about environmental issues, and I don’t think that we can trust that he’s going to going forward.”

The NDP has not announced its platform yet, so Selby was unable to demonstrate how the PC’s plans compared to theirs.

“One of the things we’ll do is get rid of Efficiency Manitoba, which will save money [and] bring back advertising so Manitobans know how to get in touch with programs that save energy for them.”