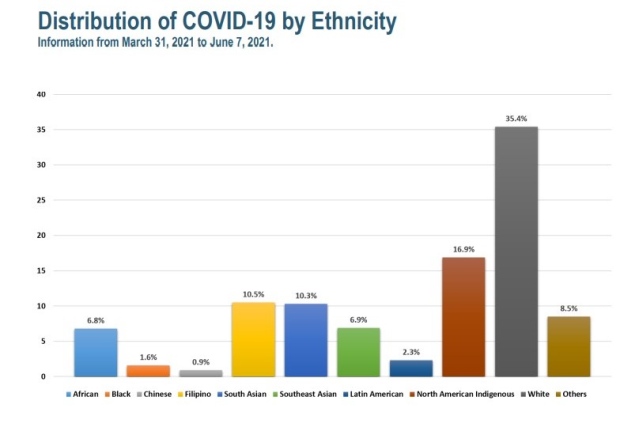 WINNIPEG — New data shows in Manitoba’s third wave of the pandemic, the proportion of cases of people identifying as white has gone down, while cases among BIPOC (Black, Indigenous and people of colour) communities have increased.

“The gap in cases between all BIPOC communities combined and cases who identified as white has grown since December,” Dr. Marsha Anderson said on Monday.

Between March 31st and June 7th, nearly 77 per cent of the 18,808 COVID-19 cases were asked about their racial, ethnic, or Indigenous identity. A small percentage declined to answer the question.

Notably, nearly 17 per cent of cases were reported among Indigenous communities, as well as 10.5 per cent and 10.3 percent among South Asian and Southeast Asian populations, respectively.

White communities accounted for over 35 per cent of COVID-19 cases during the time.

People identifying as Chinese were the only population group underrepresented among COVID-19 numbers, though Dr. Anderson noted they’ve experienced other negative impacts related to the pandemic – specifically related to a rise in anti-Asian hate crimes.

A population group labelled ‘Others’ accounted for approximately 8.5 per cent of cases. The most common responses among this group were multiracial people and those identifying as Middle Eastern or a related ethnicity.

Dr. Anderson said the diverse rates among BIPOC communities could be related to differences in housing and income status, occupational risks, or underlying conditions.

She said the effects on diverse communities include stress for members in isolation, in hospital, or those grieving deaths caused by COVID-19. She added these effects increased delays on access to vaccinations among these groups.

Anderson said BIPOC community members have, “felt stigmatized by messages that people in hospital died something wrong,” by not following public health orders or failing to get vaccinated.

The analysis states vaccination efforts and resources should utilize community partnerships and concentrate on areas where rates are the lowest. However, it also notes vaccinations alone aren’t sufficient in addressing gaps in health care, and planning for the fourth wave needs to prioritize addressing these barriers.