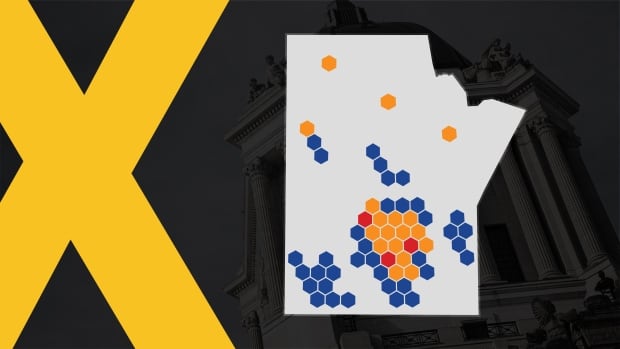 A glance at a traditional election results map, though, might suggest a closer race between the PCs and the Oppostion New Democratic Party.

That’s because these maps distort the true political influence each riding has at the legislature — making geographically large northern ridings, for example, appear as though they represent more seats than Winnipeg ridings that occupy a smaller area.

There are wildly different population densities across communities and significant size discrepancies between urban, rural and northern ridings.

For example, on a traditional map, the northern riding of Flin Flon dwarfs the Winnipeg riding of Tuxedo — yet each represents one seat in the legislative assembly.

Flin Flon — geographically one of the province’s largest ridings — spans nearly 159,000 square kilometres, while Tuxedo, an average-sized urban riding in Winnipeg, spans only 15.

But under Manitoba’s Electoral Divisions Act, each riding must contain roughly the same number of voters. That means rural ridings have to cover larger swaths of the province than densely populated urban ones.

In total 15,695 residents call the riding of Flin Flon home, compared to 20,190 residents within the Tuxedo electoral district.

So to try to paint a more accurate picture, CBC News redrew Manitoba’s political map (which you can see at the top of this story) by scaling each riding based on its actual political weight on in the Manitoba Legislature, rather than by the size of its territory.

Under this new illustrative map, called a “cartogram”, the ridings are arranged together to present familiar regional groupings.

In 2018, 56 of the 57 electoral boundaries were modified — some more than others.  That means the illustrative maps are different between the 2011 and 2016 general elections.

Below are the results from those races represented in cartogram form: