Les Maruo is following all of the commandments 10 days into Winnipeg Blue Bombers training camp. The rookie Global linebacker from Japan via the University of Texas-San Antonio constantly has his nose in his playbook, is asking a gazillion questions, busting his hump on every rep and doing his damnedest to fit into an established locker room full of Grey Cup champions.

“It’s been great. It’s really what I expected,” began Maruo in a recent chat with bluebombers.com. “Adam Bighill and Willie Jefferson have such great leadership on defence, I’m just following their lead and doing what I can. That means working hard every single day, try to do the right thing and learn from all the veteran linebackers, including Shayne (Gauthier) and Jesse Briggs.

“I ask a bunch of questions of Biggie and Shayne and Jesse… it’s all day. They don’t seem to get tired of me asking questions and they’ve been nice to help me out with answers. Right now I’m just trying to stay level-headed and take it day-by-day.”

That’s an honest, straightforward answer. A smart answer, too, because humility, especially from rookies or newcomers, is important in the Bombers locker room culture. So, Maruo is following that unofficial commandment religiously, too.

Still, there’s also this: as much as Maruo has trained himself to live in the moment, to concentrate on the grind and not make any assumptions about what role he might play for the season opener on August 5th, he’s also got real emotions and real dreams. And if you remember his reaction to being selected by the Bombers in the 2021 CFL Global Draft, you get a sense for just how much this opportunity means to him.

“I’m always in the playbook, watching film and practising,” he said. “But when we’re walking to lunch or eating lunch you can see inside to the stadium. Sometimes I just sit there and think, ‘Wow… I’m playing for the Winnipeg Blue Bombers, the defending Grey Cup champions. I’m at their facility and practising with a guy like Adam Bighill. This is crazy.’

“This is something I’ve been waiting for, praying for and hoping for. I feel like God has given me the opportunity to play in the CFL, so I can’t take it for granted. I’m doing all the little things. This is such a blessing. I just don’t want to let this opportunity go down the drain.”

The Bombers selected Maruo in the first round, fourth overall, of the 2021 Global Draft. Born in Yokkaichi Japan, he lost his father when he was four and his family later moved to Kansas when his mother remarried. He played for Hutchinson Community College after high school, parlaying that into his offer from UTSA. And after college, he spent two years in Japan’s X-League with the Asahi Challengers before being invited to the CFL’s Global combine in Japan.

To that end, Maruo feels he isn’t just waving the flag to represent the CFL’s global initiative and Japanese players, but also Hutchinson and the UTSA.

“I’ve been grinding for a long time,” he said. “I want to show that hard work can pay off if you keep at it. I went back to UTSA after I got drafted and was able to work out in the weight room because I knew the strength coach and was already vaccinated. I saw a bunch of the players in there who were freshmen when I was a senior and I want them to look up to me. Not just them, but everyone who has helped me along the way.” 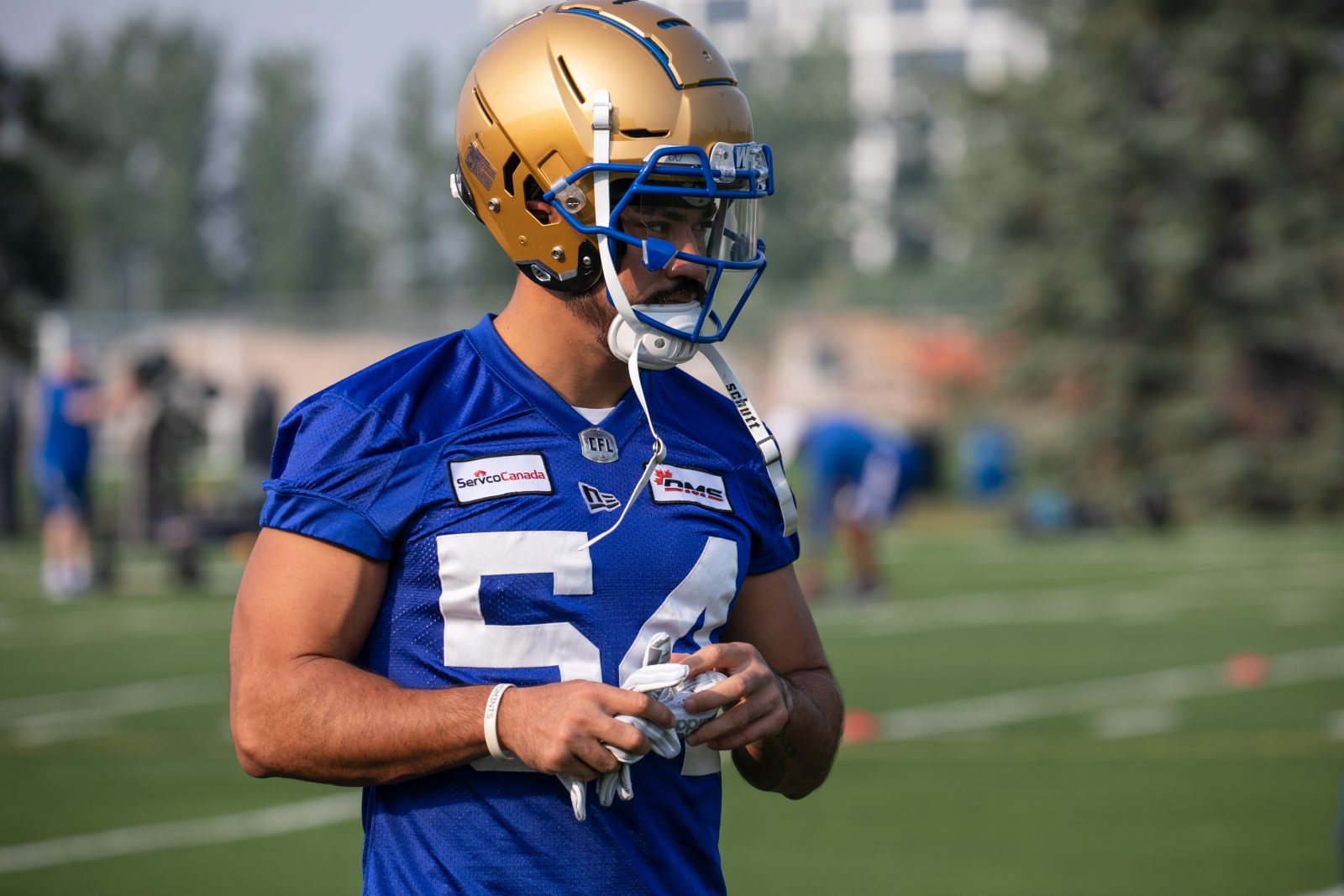 Maruo said he’s been studying his playbook since it was first made available to him after he was drafted. He took screenshots of all the pages and pored over them whenever he had a free moment. And upon his arrival in camp, he’s been stapled to the hip of Bighill, trying to pick up any tip possible from one of the CFL’s best.

“He already knows things before the play, he’s already one or two steps faster than everyone else so he’s always to the ball,” said Maruo. “He’s been playing in the CFL for a long time, so it’s not going to happen overnight. I’m going to keep asking those questions. Slowly but surely things are coming along.”

Again, his approach in this camp has been simple: head down and grind. That August 5th opener is on the horizon, sure, but there is so much work to do beforehand.