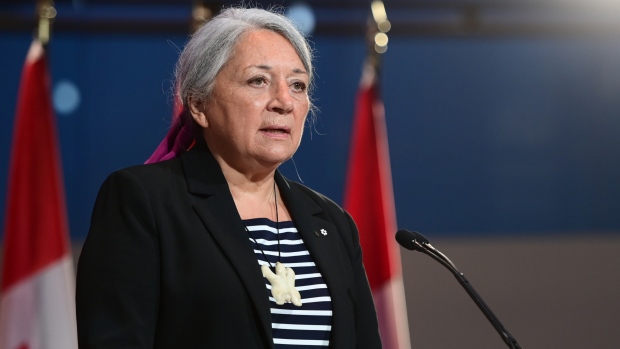 OTTAWA — Inuk leader Mary Simon will be Canada’s 30th Governor General, Prime Minister Justin Trudeau announced Tuesday. She is making history as the first Indigenous person in this country to take on the role.

“Canada is a place defined by people. People who serve those around them, who tackle big challenges with hope and determination, and above all, who never stop working to build a brighter tomorrow. In other words, people like Mary Simon,” Trudeau said, making the announcement at the Canadian Museum of History across the river from Parliament Hill.

“Today, after 154 years, our country takes a historic step. I cannot think of a better person to meet the moment,” he said, adding that he sees Simon’s new top position as one where she “will help continue paving that path ahead, and we will all be stronger for it.”

Queen Elizabeth II approved the appointment, on Trudeau’s recommendation. Simon is currently Canada’s Governor General Designate and once installed, will out-rank Trudeau, in holding the second-highest federal office in Canada after the Queen.

Simon began her introductory remarks in Inuktitut, and went on to thank both Trudeau and the Queen for their confidence in her taking on this “very historic opportunity.”

“I believe we can build the hopeful future in a way that is respectful of what has happened in the past…If we embrace our common humanity and shared responsibility for one another, Canada’s greatest days are yet to come,” Simon said.

From Nunavik, in northern Quebec, Simon has long been an advocate for Inuit rights and culture. She has worked as a radio host with CBC North and later served as chair of Inuit Tapiriit Kanatami and the National Inuit Education Committee.

She has also worked alongside the federal government on several files over many years, including on the implementation of Canada’s first land claims policy, and as the first Inuk to be a Canadian ambassador, representing Canada both as the ambassador of circumpolar affairs and as the ambassador to Denmark.

Now, she will take on the role of the Queen’s representative in Canada.

Simon said Tuesday that she is “honoured, humbled, and ready” for the job. Noting the inspirational aspect of her appointment, Simon called it a step forward on the path towards reconciliation and a moment that she hopes all Canadians feel a part of as it reflects a “collective progress” towards a more just society.

“My appointment comes at an especially reflective and dynamic time in our shared history. During my time as governor general, I will work every day towards promoting healing and wellness across Canadian society,” she said, vowing to do her part in ensuring the country fully recognizes, memorializes, and comes to terms with atrocities of the past.

In offering some personal backstory, Simon spoke about her family and childhood—her mom is Inuk and her father “from the south,” a manager of a local Hudson’s Bay post—and acknowledged that she does not speak French but plans to learn.

Simon said that she was denied the chance to pick up the language when she attended a federal day school as a child, but is determined to conduct her work in English, Inuktitut, and French.

She views her past experience as offering her the ability to act as a “bridge” between realities in Canada.

While the position is largely ceremonial, Simon will also become the top commander of the Canadian Armed Forces, and can play a crucial role in constitutional matters and within minority governments when it comes to questions of confidence.

An Officer of the Order of Canada as well as a recipient of the Governor General’s Northern Award, Simon will now be in charge of granting these kinds of honors and medals of honour to others, and will be responsible for reading the speech from the throne, and swearing-in cabinet members.

Perhaps most notably, given the rampant speculation that a summer or fall election call is likely, the governor general has the power to dissolve Parliament and draw up the writs for a general election, on the advice of the prime minister.

Canada has been without an official governor general since late January, when Julie Payette resigned from the role.

Payette, a former astronaut and engineer had been a controversial choice for governor general from the outset, and eventually left amid reports that she fostered a “toxic” work environment. Her departure came after a “damaging” independent review into workplace harassment allegations against her was conducted.

In the interim, Chief Justice of the Supreme Court Richard Wagner has been acting as the administrator, assuming the powers of the role without taking the official title.

On Tuesday, Trudeau thanked Wagner for his interim assistance.

Conservative Leader Erin O’Toole had called for Trudeau to consult other parties before nominating a replacement, given the dynamics of the minority Parliament. Instead, in March the government struck an advisory panel tasked with helping select the next governor general.

Trudeau was expected to receive the shortlist of prospective candidates by mid-June, according to LeBlanc. He recently told a House committee that the advisory panel hosted 12 meetings and the list of potential appointees for Trudeau to consider was “interesting.”

When the prime minister travelled to the U.K for the G7 two weeks ago, he spoke with Queen Elizabeth about the status of the process to choose a new governor general.

While at the time the vacancy was created, LeBlanc said that it would not take months to tap a replacement, the search and likely vetting process to pick the next governor general has taken half a year, after Trudeau came under fire for not properly vetting his last pick.