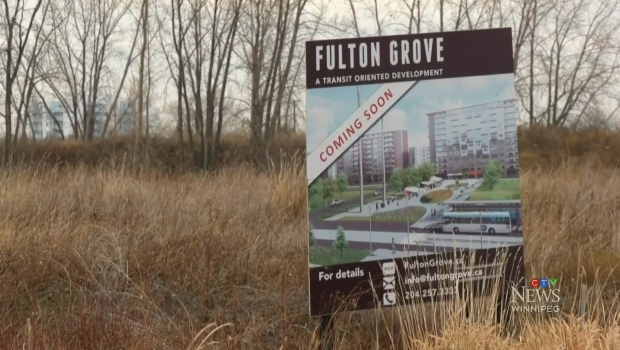 On Wednesday, the executive policy committee voted four-to-three against the Fulton Grove development’s secondary plan and subdivision and rezoning application, but even those who rejected the plan believe there’s a path forward.

“I would be concerned about putting high density beside rail tracks,” said Councillor Matt Allard during Wednesday’s EPC meeting.

The project would see up to 1,900 residential units including townhouses and towers built on 47 acres in the Parker Lands near the bus rapid transit line. City planners have continually recommended against the project in its current form, in part because of the layout and number of housing units.

“When we analyze this site we have a disagreement with the proponent as to how the land should be developed,” said James Platt, a city planner with the City of Winnipeg.

“I’d like to be able to see the applicant come forward with better addressing the concerns that have been raised by our public service,” said Mayor Brian Bowman.

Some argue it’s time to move forward with the plan, which is meant to compliment the bus rapid transit line, purposely built through the area because of the potential for development.

“We are here seven years later having this debate. Something has gone seriously wrong and we need to wrap this up,” said Councillor Brian Mayes.

“I don’t see the project being that far off the desired zone,” said Councillor Scott Gillingham.

Though divided, EPC councillors on either side of the vote seemed to agree on one thing – they all want the long-awaited development to proceed soon, and believe city planners and Gem Equities could work out the remaining differences.

“I think everyone desires to find that road to yes because we do want to see developments in these lands,” Bowman said.

The matter goes to city council next week for a final vote.