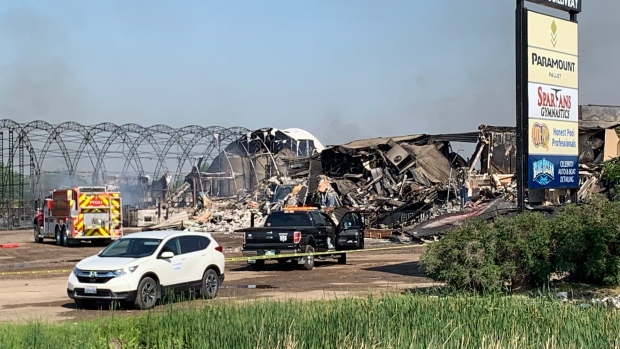 WINNIPEG — Fire crews are still on the scene of a large fire that broke out Wednesday afternoon.

The fire chief for the RM Macdonald, Mike Siemens, told CTV News Thursday that crews are still dealing with hot spots in the area.

Siemens said the fire was deemed under control around 6:30 a.m. Thursday.

He said firefighters were originally called to the area around 1 p.m. Wednesday and, when they first arrived on scene, crews found a severed natural gas line.

“So that presented a huge problem with the fire load. The escaping natural gas ignited and we didn’t put that out, because if we do then the building will explode later. So we just had to let the natural gas burn,” said Siemens.

He added that Hydro eventually made it to the scene and they were able to turn of the gas.

There were several crews called to the fire including from Headingley, Winnipeg and the Town of Morris.

The Winnipeg Fire Paramedic Service said it provided support until just after 2:30 a.m. and those crews provided water supply services, shuttled water and used a drone to “maintain situational awareness.”

Siemens said, at first, those on scene had control of the fire but he noted there was a heavy fire load which made it difficult to prevent the fire from spreading to other businesses.

He said no employees at any of the businesses were injured but two firefighters had to be treated for heat exhaustion during the fire fight.

Siemens said traffic has been reopened and investigators are now on scene to try and determine what caused the blaze.

The RM of Macdonald is also telling residents that a lot of water was used to fight the fire yesterday and people are being asked to reduce their water use.