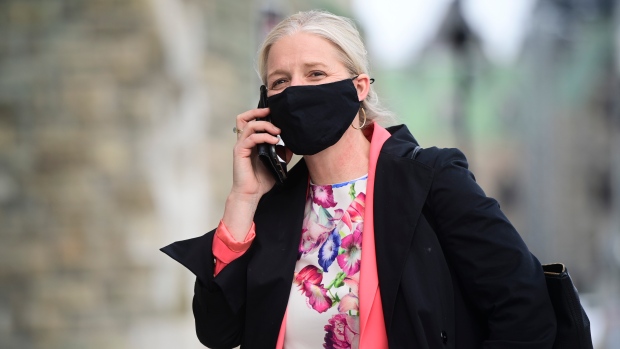 OTTAWA — Ottawa Centre MP Catherine McKenna will not be running in the next federal election, telling those gathered at her announcement Monday that she wants to spend more time with her three children and continue fighting climate change.

McKenna has represented the riding since 2015, and has been in Prime Minister Justin Trudeau’s cabinet throughout her time on Parliament Hill. She rode up to her announcement on a Liberal-red bicycle and said she’s made the decision to leave because she has “other things to do.”

“It’s two things: my kids, and climate change,” she said during her announcement, getting emotional at times.

“While thankfully we will get out of the pandemic, we still have the climate crisis to fight. This is a critical year for climate action in the most important decade that will decide whether we can save the only planet we have. I want to spend my working hours helping to make sure that we do,” she said.

McKenna said that, as was the case for many, the COVID-19 pandemic made her reflect on what matters the most to her. She told Trudeau and president of the Liberal Party Suzanne Cowan about her decision over the weekend.

McKenna said that when she first entered politics several years ago she promised herself she would fight for what she believes in and leave when she had accomplished what she got into politics to do, two things she feels she has now done.

As a minister, McKenna most recently has been rolling out billions of dollars in green infrastructure initiatives though challenges remain in ensuring infrastructure bank funds get out the door in a timely fashion. In the climate file she worked on the Paris Accord and oversaw the implementation of a national climate change plan, which included the federal price on carbon emissions that Conservative-led provinces failed in challenging in court.

“For the many people who are understandably cynical about politics, I hope you take that as hard evidence of what’s possible. Things can change, sometimes the biggest of things,” she said, denying that her departure from the Liberal cabinet is a signal that she felt she could do more to tackle the climate crisis from outside of government than she could while in it.

She said she plans to spend the summer thinking about how to next best position herself in the climate change fight, and shot down a suggestion she’d be looking to run for Ottawa mayor in next year’s municipal vote.

Over her time as one of the more prominent cabinet ministers, McKenna was highly criticized by her Conservative colleagues, and faced a deluge of misogynistic abuse online as well as in-person threats and damage to her office, resulting in her receiving a security detail.

McKenna has been outspoken about her experience as a woman in politics, with MPs from other parties offering their support and solidarity as they too, have had similar experiences.

On Monday, she said she will be “cheering on” young women and other diverse groups who choose to enter politics after her, and will fight back against the hate more strongly now that she’s leaving elected federal office.

“Do it. And when you do it, don’t be afraid to run like a girl,” she said, equating the negativity to “noise.”

After the news of McKenna’s departure was first reported by The Canadian Press on Sunday, her colleagues took to social media to congratulate her on what she accomplished in her role, and to note the importance of making time for family.

“No issue is more important than #climatechange and nobody has ever taken more crap for insisting on doing the right thing about it than [McKenna]. All that said, I totally get it. You only have your kids in your house for so long, and no matter how much you want to work on climate change in government, there are a million other things you need to do,” tweeted former top Trudeau staffer Gerald Butts.

Former senior policy staffer for federal and provincial Conservatives and current McGill Max Bell School of Public Policy professor Ken Bossenkool posted that McKenna “has been a top drawer Liberal, politician and cabinet member, even if one of those things is not my preferred thing. She’s done a heck of a lot, done it well and honourably and has been attacked shamelessly by many. All the best to her in whatever is next.”

She joins approximately a dozen other MPs who have announced they will not be running as federal candidates whenever the next election is held.

These announcements have fuelled the widespread speculation that Trudeau could be eyeing a summer or fall election, prompting these MPs to come out in advance to declare their intentions but also open up their seats to prospective new candidates.

In McKenna’s case, her departure has led to some inside-Ottawa speculation about whether former Bank of Canada governor Mark Carney, who lives in a neighbouring riding, may view this as his window of opportunity to run.

While he’s yet to indicate he wants to become an MP, in recent months he’s made his support for the Liberal Party known, vowing during the party’s April convention that he would do “whatever” he could to support the Liberals.

Asked about the prospect of Carney eyeing the vacancy she’s created, McKenna said she’s been telling him as a good friend “for years” to get into politics.

“I think he can make a big difference. The economy and climate are critically important and they’re actually intertwined so he has a lot to add, but that’s really a decision for him to make with his family,” she said.

While McKenna intends to stay on as a minister until the next election, her coming departure opens up the prospect for a summer cabinet shuffle, should Trudeau want to head into the next campaign with an ‘election ready’ roster of ministers.

As the first woman elected to represent the riding, McKenna said that she hopes her constituents know she’s “done everything” to represent her community.

McKenna was re-elected in her riding with 48.5 per cent of the vote in 2019. The riding encompasses downtown Ottawa and Parliament Hill, and prior to her securing it in 2015, it was held by the NDP.

A prospective NDP candidate currently seeking the party’s nomination for the riding wasted no time Monday framing the NDP as best placed to reclaim the riding.