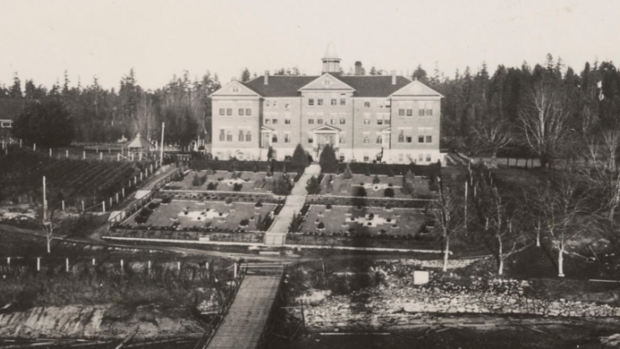 VANCOUVER — There has been another devastating discovery of unmarked graves near a residential school site in B.C., according to the local First Nation.

More than 160 “undocumented and unmarked” graves have been confirmed on Penelakut Island, formerly Kuper Island, according to a statement from Penelakut Tribe Chief Joan Brown that was circulated online Monday.

The small island off the coast of Chemainus was home to the Kuper Island Industrial School, a Catholic institution that operated from 1890 until 1975, and where many horrors have already been documented.

“We understand that many of our brothers and sisters from our neighbouring communities attended the Kuper Island Industrial School. We also recognized with a tremendous amount of grief and loss, that too many did not return home,” Brown said in her statement, which was shared by the Cowichan Tribes.

“It is impossible to get over acts of genocide and human rights violations. Healing is an ongoing process, and sometimes it goes well, and sometimes we lose more people because the burden is too great.”

In response to the shocking discovery, the Penelakut Tribe is hosting two healing sessions on the island in the coming weeks, as well as a March for the Children in Chemainus, the chief said.

“We are at another point in time where we must face the trauma because of these acts of genocide. Each time we do, it is possible to heal a little more,” Brown wrote.

According to the Indian Residential School History and Dialogue Centre website, a survey conducted at Kuper Island Industrial School in 1896 determined that 107 of 264 former students were dead.

Two sisters drowned while trying to flee the school in the 1950s, and another student died by suicide in 1966.

Decades later, one former employee, Oblate brother Glenn Doughty, was convicted on counts of gross indecency, indecent assault and dozens of sex-related charges connected to his time at the Kuper Island school and another in Williams Lake.