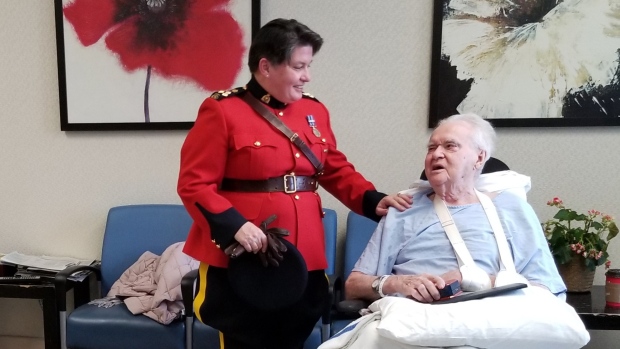 WINNIPEG — Becoming a Mountie was a dream 88 years in the making for Jack Ervin Russel. On Friday, Manitoba RCMP made that dream come true.

In 1951, when Russel was 20-years-old, he was accepted into the RCMP, but he had to decline because his family needed him in Elva, Man.

After the 88-year-old was diagnosed with a terminal illness and with only days to liveexpected, Manitoba RCMP said they wanted to put Russel’s thoughts at ease.

On Friday, Assistant Commissioner and Commanding Officer for the Manitoba RCMP Jane MacLatchy swore Russel in as an honorary Mountie.

A video shared to social media shows Russel– wrapped in blankets with one arm in a sling– salute MacLatchy and say, “Thank you.”

In 1951, 20yr old Jack Russell was accepted into the RCMP. Even though becoming a Mountie was his only dream in life, he declined, as his family needed him home in Elva, MB. Now with only days to live, his family wanted to make his dream come true… and so did we. #rcmpmb pic.twitter.com/NQ1NledmZc

Russel swore the oath of allegiance and was presented with a certificate and an engraved cap badge.

MacLatchy told CTV News it was an emotional moment.

“There’s a level of sadness that he’s at the end, but also a sense of — I don’t know, gratitude almost that we could do something for him,” MacLatchy said. “It was a special moment for me too, as commanding officer to know that we could grant him that wish.”

MacLatchy said Russel told her this meant the world to him.