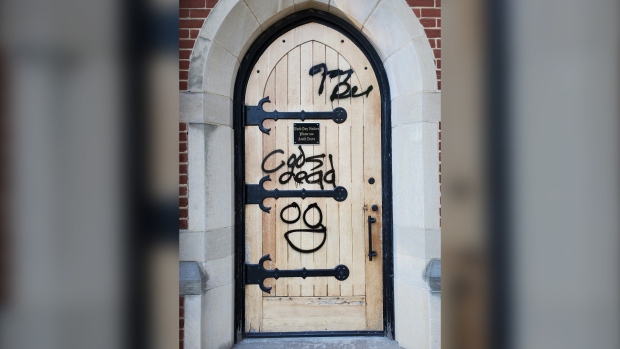 WINNIPEG — The Brandon Police Service is investigating after two churches in the community were vandalized over the weekend.

St. Matthews Anglican Cathedral and First Presbyterian were both tagged with graffiti over the weekend, along with several vehicles in the area.

“The vandalism was initially reported on July 4, at approximately 7:30 a.m. by one of the owners of the vandalized vehicles which led police to discover the graffiti on the nearby churches,” a statement from Brandon police said, adding the investigation is ongoing and no arrests have been made.

Don Bernhardt, the dean at St. Matthews Cathedral, said while his church only had one door vandalized with a message reading “God is Dead,” vandalism near first Presbyterian included the message “We Were Children.”

He believes the vandalism is linked to the discovery of hundreds of unmarked graves at the sites of former residential schools in Canada.

“On my way to work in the morning, I walked by the door and saw that it had happened,” Bernhardt said. “My reaction was one of sadness because it’s not out of the realm of possibility that something like this could happen, but it speaks to the anger and the pain of the person involved.”

In the wake of the discoveries, churches across Canada have been vandalized with graffiti, and some churches have burned to the ground, including five churches in British Columbia and the St. Jean-Baptiste Parish in Morinville, Alta. The fires are being investigated as suspicious.

Bernhardt said The Anglican Church of Canada apologized in the 1990s for its role in the residential school system.

“We’ve been committed to walking a path of reconciliation with our Indigenous brothers and sisters ever since,” he said.

“But, at the same time, the expression talk is cheap comes to mind. There are folks who believe we haven’t done enough, that other churches haven’t done enough, and again, when this happened and these graves were discovered, they used the word shocked. It wasn’t a shock to our Indigenous brothers and sisters, many of whom I talked to knew those graves were there. The issue was they had told us, but we weren’t listening.”

Bernhardt said he has talked with Indigenous elders in the community and is working to find out what the Indigenous community in Brandon wants the church to do in order to further reconciliation.

-With files from CTV’s Maralee Caruso and Kayla Rosen.