Nobody soaks up life and lives in the moment more on the Winnipeg Blue Bombers than Drew Wolitarsky.

And so, when the veteran receiver returned to the practice field Monday Wolitarsky was his usual effervescent self in offering a big picture take on the significance of stepping back on the field again.

“I feel like a rookie coming to play for the first time again,” Wolitarsky said with a massive grin. “I’m hyped up, I’m excited and I hope to be able to play in the game this week and get that under my belt again going into playoffs. That was the plan, but we’ll see.”

Wolitarsky has been out since suffering a knee injury in the Banjo Bowl and his return to work – along with Greg Ellingson, who has been out since August 11th – created a buzz as the Blue Bombers hit the practice field following a bye week and in advance of this Friday’s home date against the B.C. Lions.

The two have been key targets for quarterback Zach Collaros this season and they could get some work against the Leos before the team enjoys another by next week while B.C. hosts the Calgary Stampeders in the Western Semi-final.

Ellingson had posted superb numbers before suffering a second injury to his foot in a home loss to the Montreal Alouettes on August 11th. Wolitarsky, meanwhile, was trending toward career-best totals and was among the leading Canadian receivers in the CFL when he was felled.

The silver lining, if there was any, to being out?

“It’s to never take anything for granted, and sometimes you do,” Wolitarsky said. “You just lose sight of the fact that this is a gift, that you get to play a game that you played forever and when you’re out you just feel different. You just don’t feel that same purpose.

“It made me a lot closer to guys who are injured or going through things, or guys on the PR – I spent a lot of time with them and so it brought me closer to that side of the team as well. Everyone is really battling in their own way. It’s just the story of humanity, man.”

Both Ellingson and Wolitarsky were working with the starting offence at practice Monday, along with Rasheed Bailey, Dalton Schoen and Brendan O’Leary-Orange as Nic Demski was present and in gear but did not participate.

The veteran receivers were present daily throughout their rehab to stay mentally engaged in the game, but head coach Mike O’Shea indicated after practice Monday they could see work against B.C. to get back into game shape.

“It’s professional football. You can’t just get off the couch and go do this,” said Wolitarsky when asked why the in-game reps would be so important. “It’s too much to do that overnight, so you have to build back into it, just like a sprinter needs to get back into training to go full speed. It’s just how it is. Your muscles and your body are just not used to that impact and no matter how much Jacobs Ladder you do or squats you do in the weight room this is a different beast.” 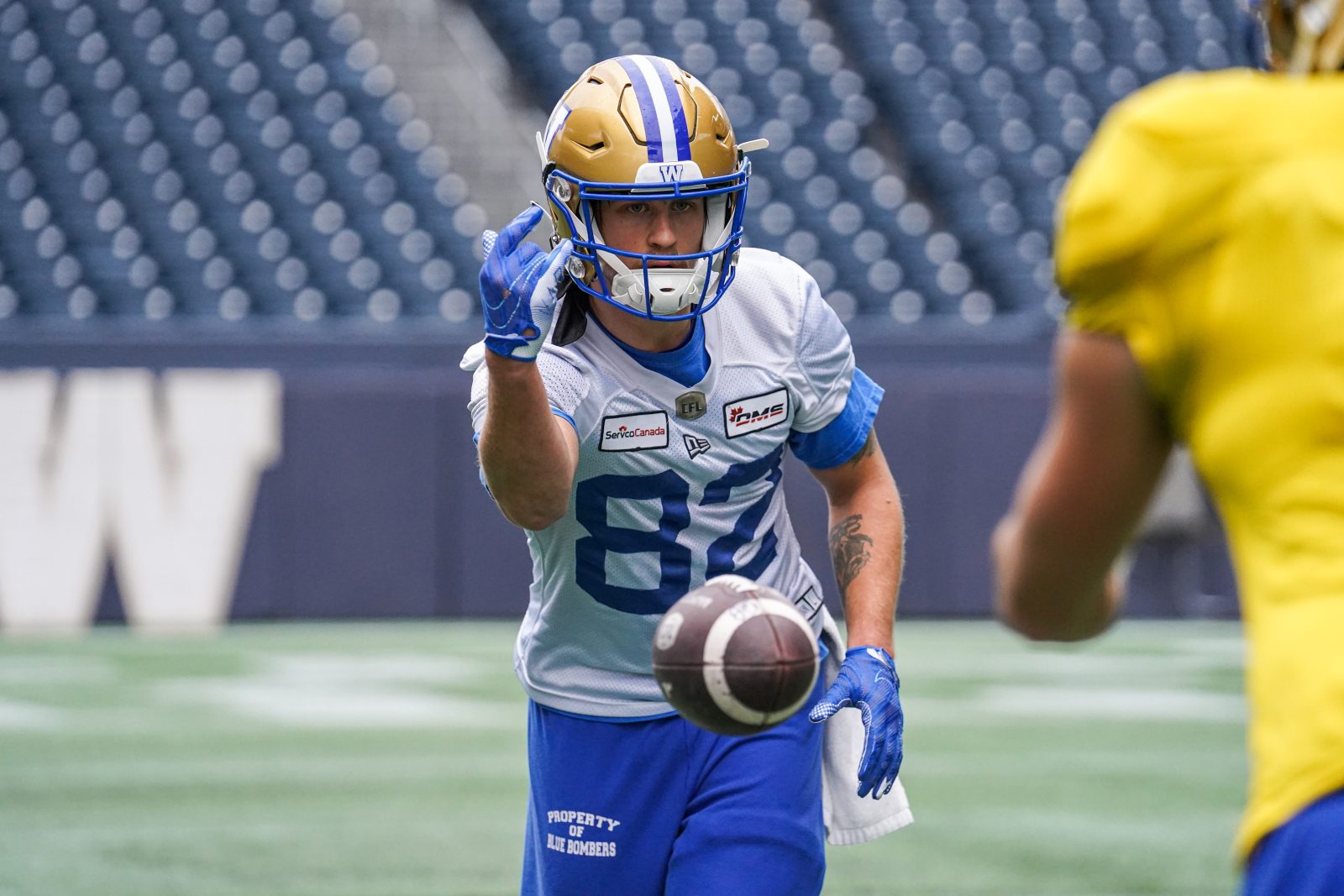 Even with Wolitarsky, Demski and Ellingson missing chunks of the season due to injury – as well as Carlton Agudosi, who flashed in his two starts – the Blue Bombers are currently second in scoring (28.5) and first in passing touchdowns (45).

“You’re a football player, you miss being on the field,” Ellingson said. “That’s something that goes with the game, especially playing for so long I’ve been down that road before and I know the patience it takes to go through what’s recommended for you and making sure you’re mentally locked in and then when the time comes, and you get back on the field when everything feels good, you’re ready for that. 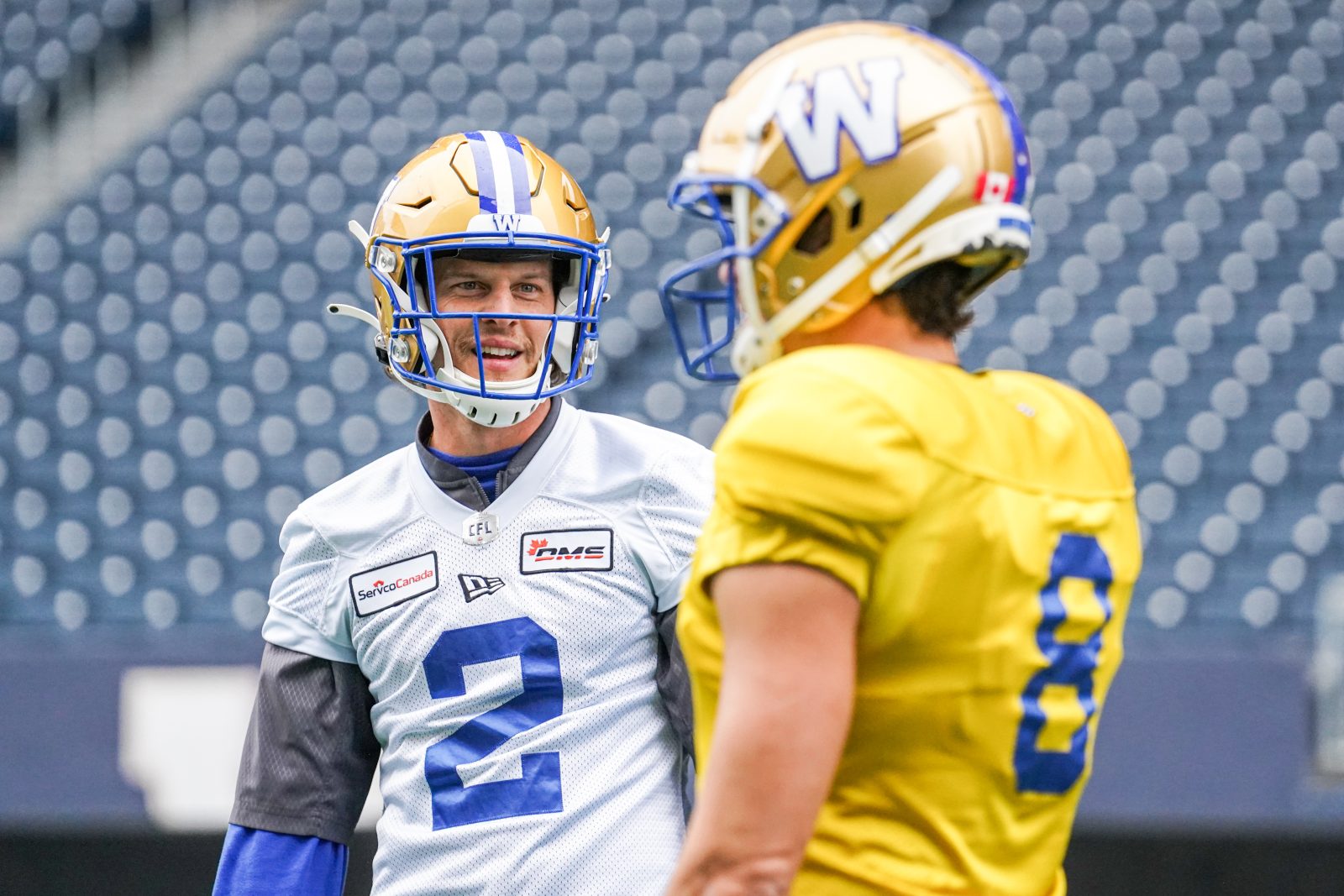 DON’T EVEN START WITH THAT:

It’s going to be a common theme leading up to Friday and expect the Blue Bombers to answer it much the same way in the days ahead. Friday’s game might not mean anything in the standings, what with Winnipeg locked into first and the Lions in second, but if they’re keeping score then it will be competitive.

“If you know this organization, you know that it does matter,” Ellingson said. “It doesn’t matter what game it is; we’re trying to go 1-0 every week. The fact that I get to be a part of it on the field again, that’s exciting for me. But I think everyone knows this game matters for everybody.

“… When it comes to playing B.C. and putting some things against them and having some success against them going into the playoffs, that matters a lot.”

For what it’s worth, Collaros did take first-team reps during practice and was working behind an offensive line that featured Eric Lofton and Jermarcus Hardrick at tackle, Geoff Gray and Pat Neufeld at guard and Michael Couture at centre.

“To me, it’s another week – that’s how we’re all treating it,” Collaros said. “We’re going to prepare the exact same way we always do and try to find that edge to get better every day. We’re excited for the challenge. B.C.’s a great team, great defence and we’re going to have to go out there and execute at a high level in order to win.” 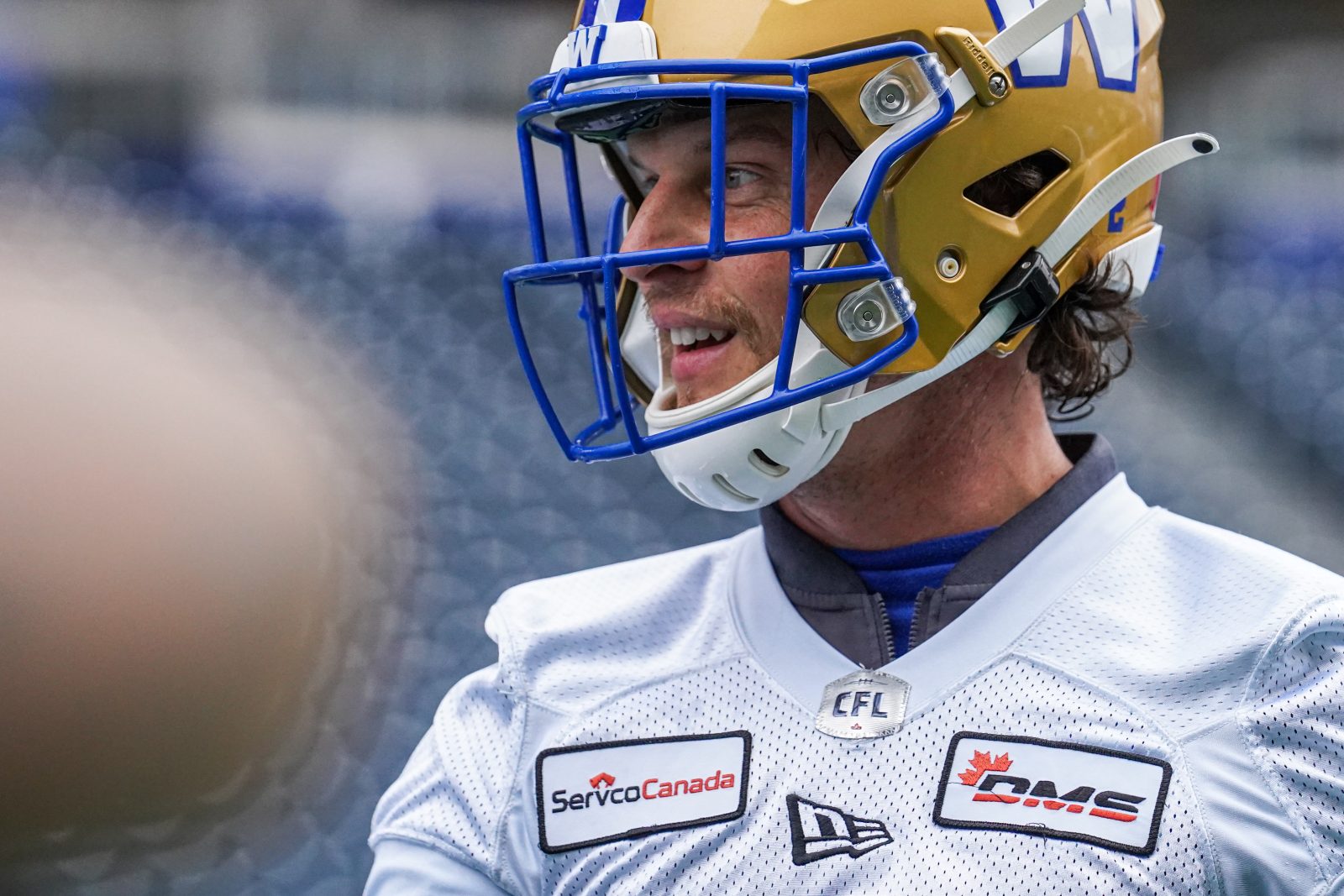 “Why I think this is the greatest game in the world is you’ve got to play hard every week to win the football game. There are no guarantees in many ways in this sport and if you don’t go out there and play hard, you’re going to get hurt.”

The Blue Bombers do have a chance to get to 15 wins with a victory, which would represent a franchise record. That likely won’t even be mentioned this week during practice. What will be is just getting things right heading into the playoffs.

“We want to win the football game,” said O’Shea. “We think it’s important to go out there and play your best football and make sure we’re playing the game the right way. You don’t want to ever have lulls in that where you just go out and go through the motions. I don’t think that’s going to work and it’s certainly not going to allow you to feel good about heading into the playoffs if you do that. There’s one way to play it, it’s all-out, and that’s what we’re going to do.

“They get to this point because they play hard all the time and when they’ve worked themselves into this position you don’t really need to talk about this stuff. They know what the expectation is. They have it amongst themselves – they want to win this game; they want to play hard.” 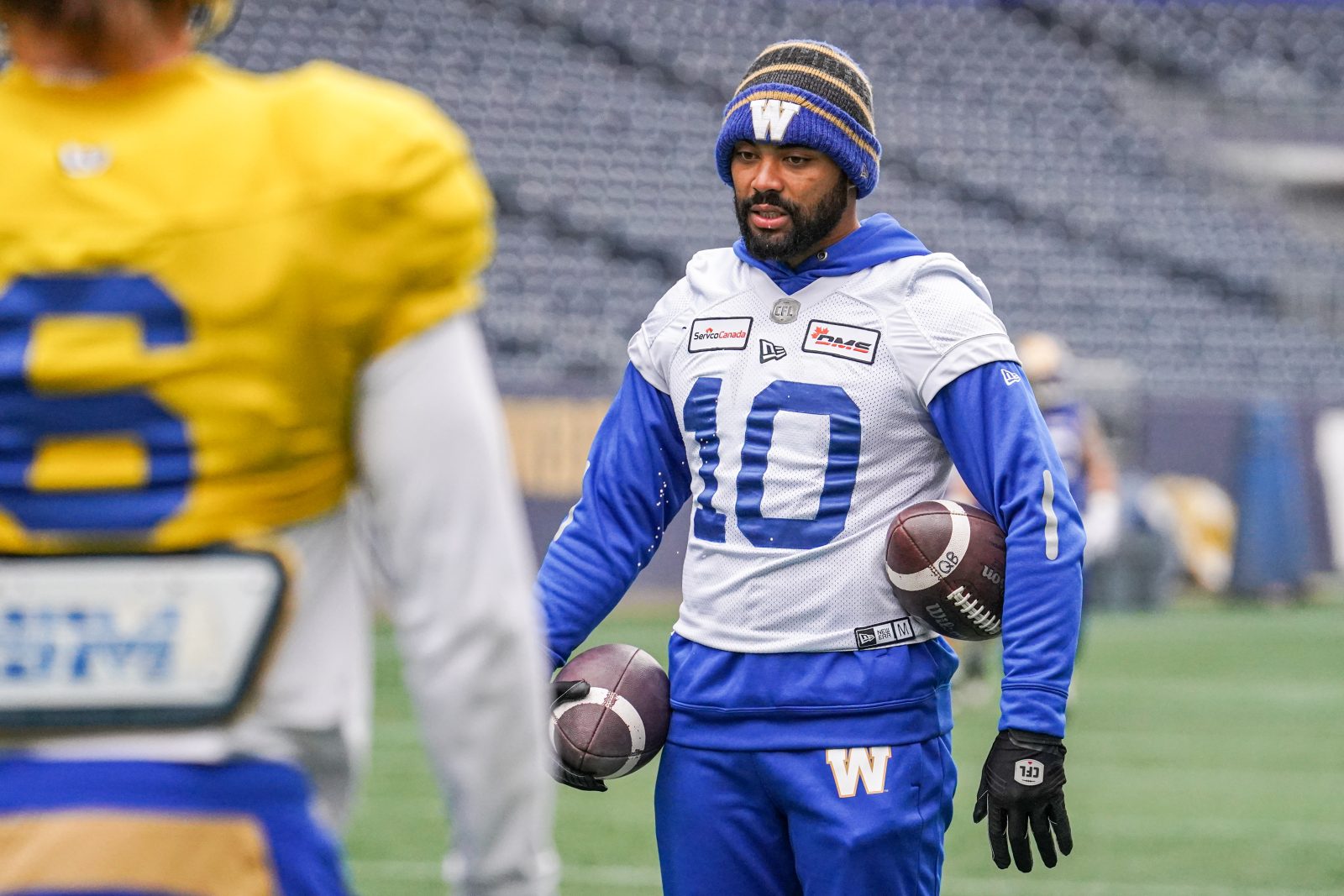 Not participating in practice on Monday were Nic Demski, as mentioned above, OL Stanley Bryant and Chris Kolankowski, LBs Malik Clements and Brian Cole and DBs Evan Holm and Malcolm Thompson, while CB Demerio Houston was in gear but did not participate. Yet to return to the practice field is LB Kyrie Wilson while Thiadric Hansen and Nick Taylor, both recovering from Achilles injuries, were present but in walking boots.

“You always want to work. It’s a job. It’s what we do. It’s how we survive. Working and playing the game is what we love doing. It’s no question that I’m going out there and playing.”

(15918)
$28.78 (as of December 7, 2022 10:28 GMT -06:00 - More infoProduct prices and availability are accurate as of the date/time indicated and are subject to change. Any price and availability information displayed on [relevant Amazon Site(s), as applicable] at the time of purchase will apply to the purchase of this product.)

(3269)
$12.79 (as of December 7, 2022 10:28 GMT -06:00 - More infoProduct prices and availability are accurate as of the date/time indicated and are subject to change. Any price and availability information displayed on [relevant Amazon Site(s), as applicable] at the time of purchase will apply to the purchase of this product.)

(48764)
$13.78 (as of December 7, 2022 10:28 GMT -06:00 - More infoProduct prices and availability are accurate as of the date/time indicated and are subject to change. Any price and availability information displayed on [relevant Amazon Site(s), as applicable] at the time of purchase will apply to the purchase of this product.)

(35822)
$49.07 (as of December 7, 2022 10:28 GMT -06:00 - More infoProduct prices and availability are accurate as of the date/time indicated and are subject to change. Any price and availability information displayed on [relevant Amazon Site(s), as applicable] at the time of purchase will apply to the purchase of this product.)