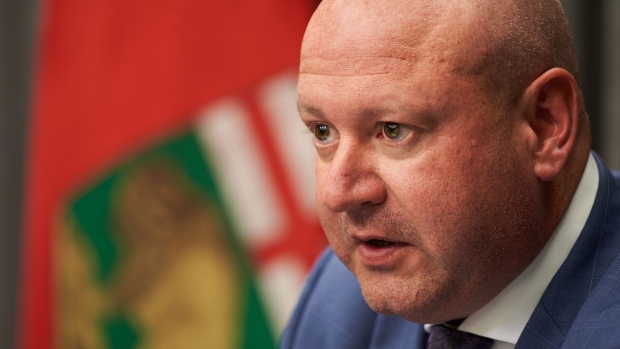 WINNIPEG — Manitoba health officials have identified another death linked to a variant of concern, along with 31 new cases of COVID-19 as of Monday.

Dr. Brent Roussin, the chief provincial public health officer, reported the death of a man in his 70s from the Interlake-Eastern region on Monday. The man’s death has been linked to the Alpha (B.1.1.7.) variant of concern.

Along with this death, Roussin provided a few more details about a death announced on Sunday. He said this was a woman in her 40s from the Winnipeg region.

This brings the total number of people who have died with COVID-19 in Manitoba to 1,162.

Along with these deaths, the province reported 31 new cases as of Monday, and a five-day test positivity rate of five per cent.

The Winnipeg region, which has a test positivity rate of 4.1 per cent, identified 20 new cases as of Monday. It has a total of 356 active cases.

The other cases reported on Monday include:

The province said since Friday there have been 181 cases identified – which in addition to Monday’s cases include 87 cases on Saturday and 63 cases on Sunday.

The province said 135 people were in hospital with COVID-19 in Manitoba as of Monday, including 30 COVID-19 patients in intensive care. Of the ICU patients, 10 have active cases while 20 are no longer infectious but still need that critical care.

Three people are still receiving care in Ontario intensive care units. The province said 42 people who had been receiving out-of-province care have since returned to Manitoba hospitals. No other COVID-19 patients were taken outside the province for care on Sunday.

The province said 1,332 laboratory tests were completed on Sunday, for a total of 846,855 lab tests completed since early February 2020.