The Public Health Agency of Canada is denying any connection between the National Microbiology Lab in Winnipeg, two scientists who were escorted out of the building last summer, and the coronavirus outbreak in China.

Baseless stories claiming that the two scientists are Chinese spies and that they smuggled the coronavirus to China’s only Level 4 lab in Wuhan last year have been spreading on all major social media platforms and on conspiracy theorist blogs. One article from a conspiracy blog was shared more than 6,000 times on Facebook on Monday.

The story even made its way on Chinese-owned social media app TikTok, where a video pushing these claims was watched more than 350,000 times.

“This is misinformation and there is no factual basis for claims being made on social media,” Eric Morrissette, chief of media relations for Health Canada and the Public Health Agency of Canada said in response to queries by CBC News.

The conspiracy theory seems to be based on a distorted reading of reporting from CBC News published last summer. One of the first mentions occurred Saturday on Twitter, where businessman Kyle Bass claimed that “a husband and wife Chinese spy team were recently removed from a Level 4 Infectious Disease facility in Canada for sending pathogens to the Wuhan facility.” 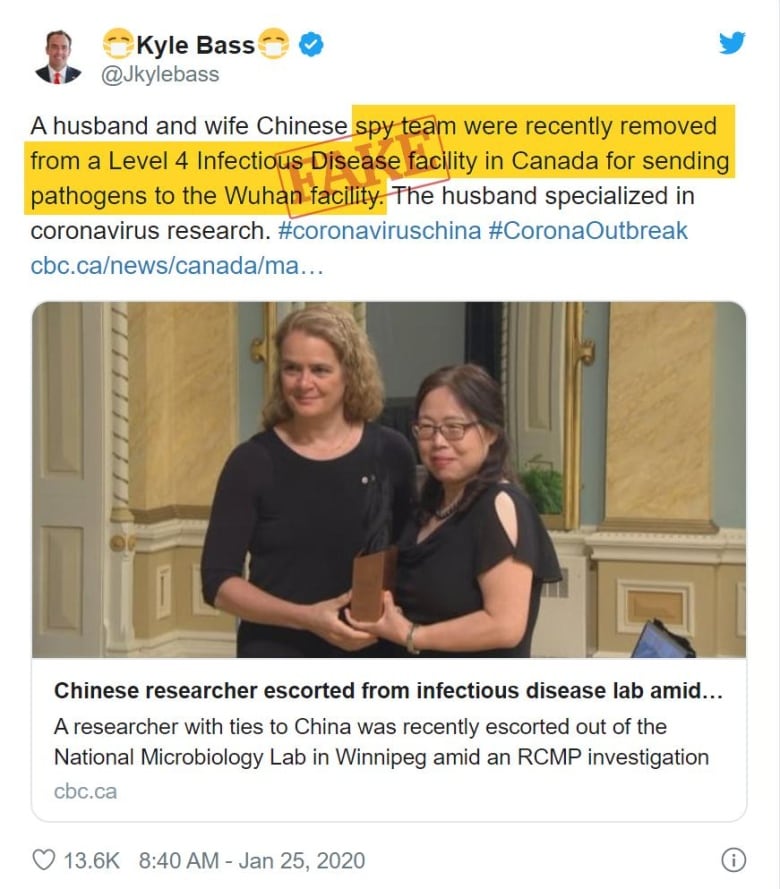 The conspiracy theory seems to be based on a distorted reading of reporting from CBC News published last summer. One of the first mentions occurred Saturday on Twitter, where businessman Kyle Bass claimed that ‘a husband and wife Chinese spy team were recently removed from a Level 4 Infectious Disease facility in Canada for sending pathogens to the Wuhan facility.’

In the tweet, which was shared over 12,000 times, he linked to a story CBC News broke in July, revealing that a researcher, her husband, and some of their graduate students, were escorted out of the National Microbiology Lab (NML) in Winnipeg amid an RCMP investigation into what’s being described as a possible “policy breach” and “administrative matter.”

The RCMP and Health Canada have both stressed that there was no danger for public safety.

CBC reporting never claimed the two scientists were spies, or that they brought any version of the coronavirus to the lab in Wuhan. 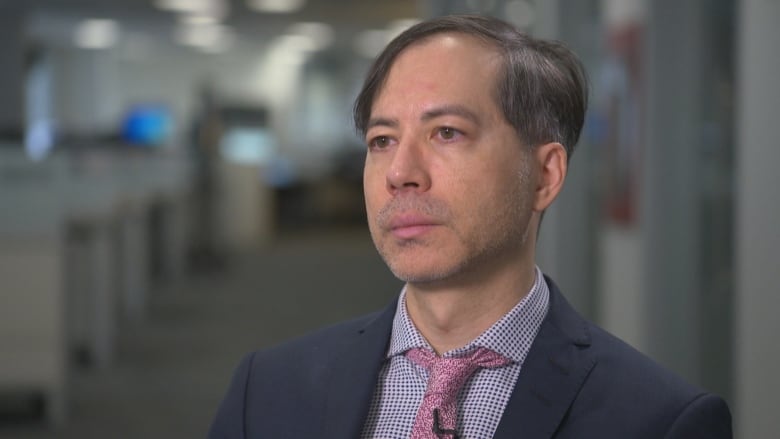 Experts say the disinformation is creating a “social panic” online.

“We’ve seen already on Twitter and Reddit and other platforms that there have been calls to ban travellers from China from entering North American or Europe — that there have been individuals targeted to be supposedly pulled off flights or stopped at the Canadian border or the U.S. border,” says Fuyuki Kurasawa, director of the Global Digital Citizenship Lab at York University.

“The broader damage is that there grows a mistrust toward both government authorities, public health officials, the media, authoritative sources of media, and there there becomes a social media environment where speculation, rumour and conspiracy theories take over and wash out the factual information that is being promoted online.” 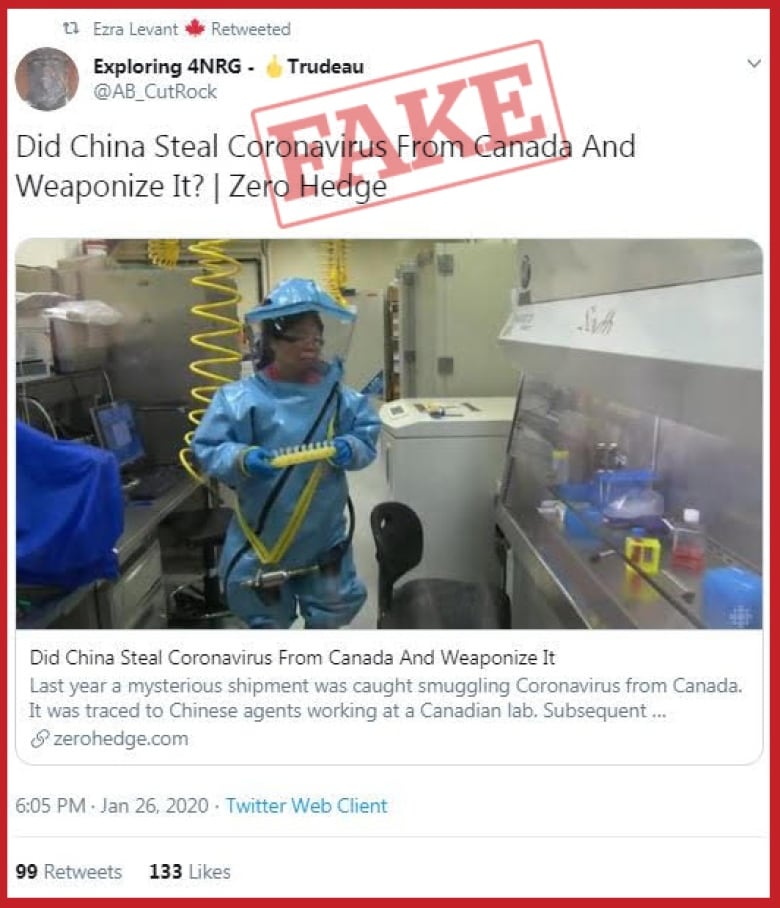 This claim that China smuggled the coronavirus out of a Canadian lab has been circulating on Twitter. (CBC)

Kurasawa is already seeing that spread from the online world to the real world.

“Individuals will take it on themselves to become vigilantes, where they’ll try to spot someone who supposedly is either holding the truth about some hidden truth about the coronavirus or a person who may be a carrier or supposed carrier of the virus because they appear to have certain symptoms, and then they’ll ask the general public to take matters into own hands,” he says.

Kernels of truth in disinformation

Dr. Xiangguo Qiu is a medical doctor and virologist from Tianjin, China, who came to Canada for graduate studies in 1996. Qiu is still affiliated with the university there and has brought in many students over the years to help with her work. She helped develop ZMapp, a treatment for the deadly Ebola virus which killed more than 11,000 people in West Africa between 2014-2016.

One month later, CBC discovered that scientists at the NML sent live Ebola and Henipah viruses to Beijing on an Air Canada flight March 31. The Public Health Agency of Canada says all federal policies were followed. PHAC will not confirm if the March 31 shipment is part of the RCMP investigation. 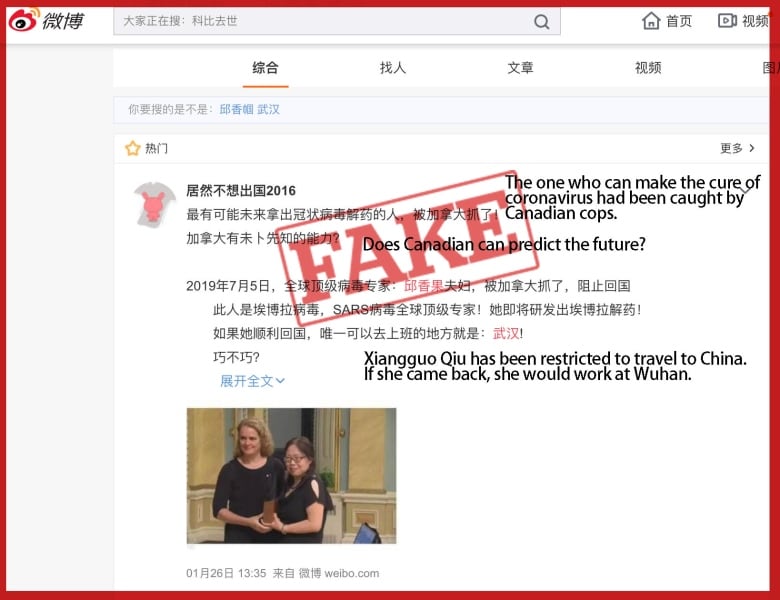 Contrary to posts on Twitter, the coronavirus was not part of this shipment. And there is no confirmation Qiu or Cheng were the scientists behind the shipment.

In another followup story using travel documents obtained in Access to Information requests, CBC reported that Qiu made at least five trips to China in 2017-18, including one to train scientists and technicians at China’s newly certified Level 4 lab.

She was invited to visit the Wuhan National Biosafety Laboratory of the Chinese Academy of Sciences twice a year for two years, for up to two weeks each time. The lab does research with the most deadly pathogens. 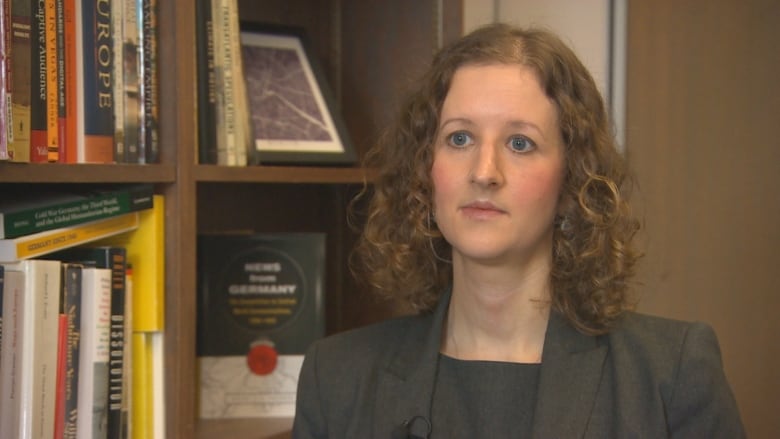 Heidi Tworek, assistant professor in international history at University of British Columbia, says governments and public health agencies have to be more effective at communicating to the public because disinformation will spread faster than facts. (Glen Kugelstadt/CBC News )

PHAC has denied any connection between the RCMP investigation, Qiu’s visits to Wuhan or any Canadian research, with the coronavirus outbreak.

Heidi Tworek, assistant professor in international history at the University of British Columbia, says governments and public health authorities need to do a better job of communicating facts at times like this, including in the languages of the communities impacted.

“It’s incredibly challenging during fast-moving outbreaks of any disease to balance between information to keep the public safe and prevent something from becoming a massive epidemic and also trying to provide truthful information and also providing enough so you don’t end up with a vacuum, which is where disinformation can flourish,” Tworek says.

“We’ve seen in previous outbreaks it’s been difficult to get this right, but I’d emphasize this is actually a crucial element of what we need to be thinking about into the future — how do we actually communicate well and swiftly with general public with all types of health scares? This will not be the last time we face disinformation during a potential epidemic.”