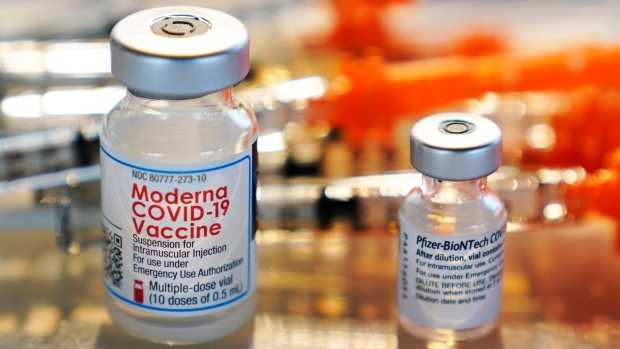 Ontario is one of the latest provinces to expand its booster dose eligibility, announcing that residents aged 18 and older will be able to book their third dose appointment as of Jan. 4.

This comes shortly after the release of new guidance from Canada’s National Advisory Committee on Immunization (NACI) regarding COVID-19 boosters. As more people become eligible for their third dose, and the number of Omicron cases in Canada continues to rise, it’s likely that more and more Canadians are wondering what type of booster shot to get.

As of now, only mRNA vaccines are authorized for use as a booster in Canada – this includes both Pfizer-BioNTech and Moderna. Based on NACI recommendations, it’s also clear that mRNA vaccines are the preferred boosters for most of the population.

Experts say it doesn’t matter which of the two is received as a booster, as long as it’s an mRNA vaccine.

Dr. Zahid Butt is an infectious disease epidemiologist based in Waterloo, Ont. While data on booster efficacy continues to evolve, he said there isn’t enough of a gap to show that one booster performs better than the other.

“There aren’t many studies looking at this but from what we have seen until now, there is no real difference in protection between the booster doses, whether you get Moderna or Pfizer,” he said in a phone interview with CTVNews.ca on Thursday.

Seeing as they’re both the same type of vaccine, there’s also nothing wrong with mixing doses, Butt said, such as getting a Moderna booster shot after a double dose of Pfizer, or vice versa.

“They use the same technology, mRNA vaccine technology; that’s why they can be used interchangeably,” he said.

For 18- to 29-year-olds, however, NACI suggests that a booster dose of the Pfizer vaccine may actually be preferred.

“[Pfizer] doesn’t have as many side-effects like pericarditis and myocarditis, which are slightly higher among those who are taking Moderna,” he said, referring to rare side-effects of the COVID-19 vaccine that can cause inflammation of the lining around the heart as well as the muscle itself. “This is the age group that is more susceptible to [these side-effects].”

For adults aged 70 and older, as well as those who are immunocompromised or living in long-term care homes for seniors and other congregate living settings, both Pfizer and Moderna are recommended as boosters. Anyone in these groups receiving Moderna as a booster should be getting a full dose of the vaccine rather than a half dose, based on NACI recommendations.

Additionally, for anyone who started with a viral vector-based COVID-19 vaccine – either two doses of AstraZeneca or a single dose of Johnson & Johnson – the preference is still to get a booster dose of an mRNA vaccine, said Dr. Matthew Oughton, an infectious disease specialist at the Jewish General Hospital and McGill University in Montreal.

“If you got a viral vectored vaccine as your primary series…then for sure the booster that’s recommended is an mRNA vaccine,” he told CTVNews.ca in a phone interview on Nov. 18. “Because theoretically, those people may be at higher risk of faster waning immunity.”

That said, for anyone who has experienced complications related to an mRNA vaccine dose in the past or can’t currently access one, a viral vector-based vaccine would be recommended as a booster instead, he said.

STICKING WITH THE SAME BRAND A ‘SENSIBLE’ APPROACH

For those with two doses of Pfizer or two doses of Moderna, some doctors suggest getting the same mRNA brand as a booster as well.

Dr. Lisa Barrett is an infectious disease specialist and professor at Dalhousie University in Halifax. She described this as a “sensible” approach to determining which booster to take; once the body has proven it’s able to tolerate a vaccine, it makes sense to continue with it, she said.

“It really is just a way of reducing the side-effect profile that you might have,” Barrett told CTVNews.ca in a phone interview on Thursday. “Not because one is more side-effect-oriented than another, but because if you yourself have demonstrated that you don’t have a reaction to that brand, then keep going with it.”

This also applies to patients with one dose of the AstraZeneca vaccine, and one dose of an mRNA vaccine. It makes sense to receive the same mRNA vaccine as a booster shot as well, Barrett said. But she also encourages patients to be mindful of availability.

“If it’s going to take a really long time to get, for example, Moderna because you’ve had Moderna before, and there’s Pfizer available, you can consider getting the Pfizer vaccine as well,” she said. “Go with whichever mRNA vaccine is most available, particularly if you’re in an area where there may be lots of virus.”

DOES ONE BOOSTER OFFER MORE PROTECTION AGAINST OMICRON THAN THE OTHER?

For the most part, it remains to be seen just how effective current vaccines and booster doses are in protecting against the new Omicron COVID-19 variant, said Barrett, although more studies continue to be conducted.

One study by Israeli researchers shows that two doses of the Pfizer vaccine, followed by a Pfizer booster shot, offers significant protection against Omicron. These results are similar to ones provided by Pfizer and BioNTech earlier last week.

Preliminary data suggested that two doses of the Pfizer vaccine may not be enough to protect against infection with the Omicron variant. Lab tests did show, however, that its booster dose increased levels of virus-fighting antibodies by 25-fold, compared to just two doses. These results have yet to undergo scientific review.

While these initial results may seem promising, Barrett insisted it’s important to wait and see how this translates into real-world protection. She points to additional immune responses in the body involving T cells for example, that do not get measured and may also offer protection.

“The question of what is enough neutralizing antibody to protect against Omicron, to be honest, is not known yet,” she said. “Without those real-world data, I think it’s very tough to know if there is any extra protection with boosters.”

While Barrett said it’s likely that current vaccines won’t be as effective in producing neutralizing antibodies to fight Omicron, the impact they’ll have on death and hospitalization rates of those infected with the new variant is not yet known. This also makes it tough to tell which vaccine is most effective in protecting against Omicron.

“If you get a booster, get it for the intent of potentially providing some additional protection,” she said. “Get it for COVID, not for Omicron specifically.”

Do you have questions about the Omicron COVID-19 variant? We want to hear from you.

(35)
$33.11 (as of January 27, 2022 10:34 GMT -06:00 - More infoProduct prices and availability are accurate as of the date/time indicated and are subject to change. Any price and availability information displayed on [relevant Amazon Site(s), as applicable] at the time of purchase will apply to the purchase of this product.)

(92)
$9.45 (as of January 27, 2022 10:34 GMT -06:00 - More infoProduct prices and availability are accurate as of the date/time indicated and are subject to change. Any price and availability information displayed on [relevant Amazon Site(s), as applicable] at the time of purchase will apply to the purchase of this product.)

(5062)
$7.49 (as of January 27, 2022 10:34 GMT -06:00 - More infoProduct prices and availability are accurate as of the date/time indicated and are subject to change. Any price and availability information displayed on [relevant Amazon Site(s), as applicable] at the time of purchase will apply to the purchase of this product.)

$42.90 (as of January 27, 2022 10:34 GMT -06:00 - More infoProduct prices and availability are accurate as of the date/time indicated and are subject to change. Any price and availability information displayed on [relevant Amazon Site(s), as applicable] at the time of purchase will apply to the purchase of this product.)

(15)
$42.89 (as of January 27, 2022 10:34 GMT -06:00 - More infoProduct prices and availability are accurate as of the date/time indicated and are subject to change. Any price and availability information displayed on [relevant Amazon Site(s), as applicable] at the time of purchase will apply to the purchase of this product.)