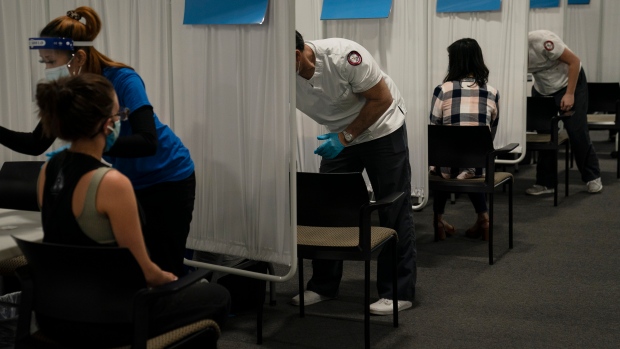 TORONTO — Retired engineer and school teacher Bill and Jennifer Graham of Toronto, Ont. have been trying to do the right thing ever since they travelled to Fort Myers, Fla., to do repairs on their residence in early January.

While there, Governor Ron DeSantis opened up Florida’s vaccination parameters to include seasonal residents – which meant the Grahams, and thousands of other Canada’s Snowbirds, were able to get inoculated. In April, the Grahams returned to Canada by flying into Buffalo, N.Y., and driving across the border to avoid the mandatory hotel quarantine implemented for passengers flying into the country.

It was there that they had their first brush with what some are calling a massive oversight in the federal and provincial vaccination data collection.

“When we were at the border, the customs and immigration guys…they’re all very professional, they’re all very helpful,” Graham said of the Canadian Border Services Agency (CBSA) in a telephone interview with CTVNews.ca Friday. “But we asked them about the [vaccination] data, they all said, ‘look, we have no mandate, we have no way of doing anything with the information.’”

Graham said he informed his doctor that he was vaccinated to keep his personal records up to date, but when he attempted to let his local public health unit know of his vaccination status so they could upload it to the central COVaxON system his efforts were stalled.

“They emailed me back a very polite message saying they were unable to register my vaccination status,” Graham said. “Then they told me I could upload my information to the EHealthOntario website or the CANImmunize App if I wanted to keep track of my records myself.”

“At this time, it is not possible to report your COVID-19 immunizations you received outside of Canada to Toronto Public Health or the Province. We are waiting for the Ontario provincial government to provide us with information regarding how those who were vaccinated outside of the country and province can report their immunizations.”

Ontario’s Ministry of Health’s current guidelines for people vaccinated outside of the province or the country – published three days after the Graham’s received an email from Toronto Public Health — states that “individuals who have received a partial or complete COVID-19 vaccine series outside of Ontario or Canada should contact their local public health unit to have their COVID-19 immunization record documented into COVaxON.”

The guidance continues that all individuals who have received all recommended doses of a Health Canada authorized COVID-19 vaccine given outside of the province or outside of Canada are “considered to have a complete vaccine series and no additional doses are needed.”

In a statement emailed to CTVNews.ca Friday evening, the Ontario Ministry of Health said “while the functionality to add out-of-province vaccinations to the COVAX database has been implemented, it is up to each public health unit (PHU) to put in place their own process for doing so. We are working with all of the PHUs to ensure that processes are in place. Please contact individual PHUs for more information.”

This means the thousands of Canadians inoculated in the U.S. and abroad with Health Canada-approved vaccines are recognized as fully vaccinated from a medical standpoint– but may not be registered or counted in provincial and national inoculation tallies, which are forming the basis of most re-opening plans.

In a statement to CTVNews.ca Friday the Public Health Agency of Canada (PHAC) said vaccines received by Canadians in other countries are captured by provincial and territorial immunization registries and are only counted if the vaccinated individuals voluntarily submit their proof of inoculation to their local public health unit.

However, the March 2021 Auditor General report highlighted the poor collaboration and shortcomings between the provinces and territories in sharing data with their national counterparts.

Those who have been vaccinated abroad say they are still struggling to register their status provincially, leading to frustrations at what they say is lack of communication and an oversight in vaccination tallies.

“We’ve called the Halton Public Health Unit twice now to tell them about our vaccinations,” Burlington, Ont.-resident Anita Sauve, who spent the winter with her family in their condo in Mexico and flew to Texas to get vaccinated, said in a telephone interview with CTVNews.ca Friday. “The first time they said, ‘that’s a good point. Let me get back to you.’”

Sauve said she called again last week and was told the public health unit “has no way of tracking that” information, nor could they upload her status into COVaxON.

“They said… ‘I’m getting a whole bunch of calls about it, but there’s really nothing we can do,’” she continued, adding that she was told her family may have to carry proof of vaccination around with them to avoid issues, “which is just ridiculous.”

“They’re talking about lifting restrictions at the border and fully vaccinated Canadians not having to quarantine – do I not count because I got it out of the country?” Sauve said.

The Canadians Snowbirds Association (CSA) told CTVNews.ca in an email Friday that the organization estimates that approximately 30 per cent of Canadian Snowbirds travelled this season, and in a “typical” year, that’s more than one million people heading south.

The CSA also said they had received “a number of complaints” from members that their local public health units are unable to register their vaccination status upon their return.

“I’m just frustrated,” Sauve said of the provincial and federal response to vaccinations outside of the country. “We have the capability to do so much better.”

As provinces slowly phase into re-opening, Canadians hoping to travel once restrictions are lifted have been pointing out that the government already has a platform that could be used for travelers to upload their vaccination status – the ArriveCAN app.

“It seems to be a good app, I can’t see why they’re not using it for that,” said Graham.

Public Safety Minister Bill Blair said last week that vaccine certification was being integrated into ArriveCAN, an effort spearheaded by the CBSA.

PHAC said in their statement “additional details on the requirements for providing proof of vaccination and how to enter it into ArriveCAN will be available online in the coming weeks.”

But for now, people like Jennifer Pfeiffer, who lives in Ottawa, Ont., and has dual citizenship with the U.S., have to wait. Pfeiffer decided to take advantage of the state of New Hampshire’s COVID-19 vaccination protocols, which were widened to include all adults in April, and drove down in a 12-hour round trip for a drive through vaccination.

“It was right at the peak of the third wave in Ontario…and I wouldn’t become eligible in Canada until whenever they opened up vaccinations for 18 to 40 year-olds,”Pfeiffer said in a telephone interview with CTVNews.ca Friday. “I was concerned and I didn’t want to wait…I was doubly-vaccinated in the States before I was eligible here.”

When she returned, her attempts to let Ottawa Public Health know of her vaccination status were unsuccessful.

“What bothers me is that I have to play ping pong between the Ministry of Health and Ottawa Public Health,” she said. “In my small neighbourhood in Ottawa there are at least 20 of us – dual citizens who have gone down to the states and gotten vaccinated. They’re missing data, their data is flawed.”

Pfeiffer said she understands that public health organizations are “overwhelmed” trying to get Canadians vaccinated but that it’s important to note that Ontario might actually have hit its vaccination targets earlier than thought “if they actually had a way for Snowbirds and dual citizens to enter that data.”

“I know that I have extreme privilege to be able to do this,” Pfeiffer said of her U.S. vaccination trip. “It’s just when they’re relying on this data and they know this data is wrong because they’ve known since January that Snowbirds are getting vaccinated in the states – they’ve had this time to prepare.”