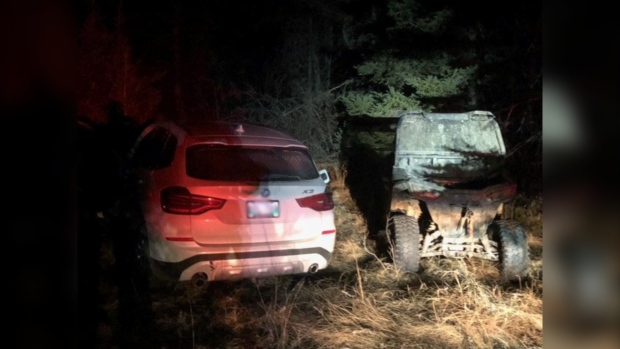 On April 21 at around 2:00 a.m., officers responded to two separate reports of theft in the RM of Argyle. In both instances, suspects entered a garage and fled in stolen vehicles. RCMP’s Police Dog Services searched the area, but no suspects were located.

RCMP said they located one of the stolen vehicles by utilizing its built-in tracking system later that day. At about 9:10 p.m., RCMP attempted a traffic stop on Highway 2 in the RM of Victoria, but the stolen vehicle drove away at a high speed. RCMP didn’t pursue the vehicle for safety reasons.

At approximately 10:30 p.m., RCMP found the stolen vehicle in a field near Highway 5 in the RM of Glenboro – South Cypress and arrested five suspects at the scene. RCMP said a police dog was deployed to assist after one of the suspects failed to comply with the arresting officer’s commands.

RCMP said the stolen vehicle, along with two stolen all-terrain vehicles and a firearm, were recovered at the scene.

Five males ranging in age from 17 to 23 are facing charges of possessing stolen property and unauthorized possession of a firearm. The 23-year-old is also facing a charge of resisting arrest. None of the charges have been proven in court.

Turtle Mountain RCMP said they are continuing to investigate.