You Are Here Home news ‘Poof — there was flames coming up all out of the top’: Fire on Young Street spreads to neighbouring homes

Fire crews battle the fire as flames leap from the boarded-up front door and window of the home on Young Street between Sargent and Ellice Avenues on Sunday. (Aidan Geary/CBC)

A boarded-up house in Winnipeg’s Spence neighbourhood went up in flames Sunday, damaging power lines and six houses around it and forcing at least one family of neighbours from their home.

Darren Fawcett said his family was playing cards when the fire started at the vacant house next to the one they rent on Young Street, between Sargent and Ellice avenues. The fire spread so quickly it shattered the windows of their third-storey suite.

“Hectic, panic, anxiety. You name it, it was all there. There was no, even, thought about anything,” Fawcett said Sunday, standing across the street and watching crews fight the fire, spraying his own home and others as well.

“We ran out and just watched everything go bye-bye.”

Fawcett said he’s not sure where he, his girlfriend and her five children will sleep tonight, fearing the entire suite is damaged.

“We’re kind of lost right now, because we lost everything. Pretty much everything in the house is going to be damaged,” he said. “We got five kids, we got to keep on the street tonight, we don’t know where we’re going.” 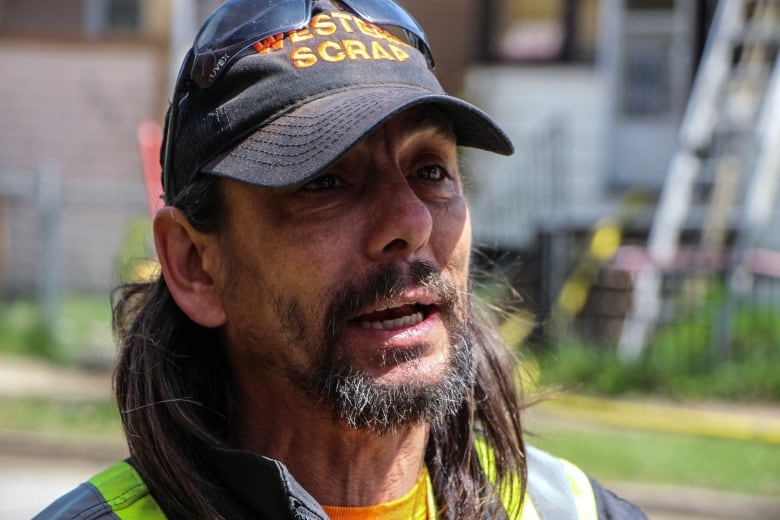 The fire affected six homes in the area, including Fawcett’s, Marchak said. He said when crews arrived, the flames were already 15 to 20 feet in the air from the boarded-up house.

Marchak said the house is a total loss. Around noon Sunday, the roof of the building had completely collapsed.

“There’s no back of the house,” he said.

Manitoba Hydro wrote on Twitter it shut off power to about 100 customers in the area as a result of the fire. Power was expected to be back on by around 5 p.m. 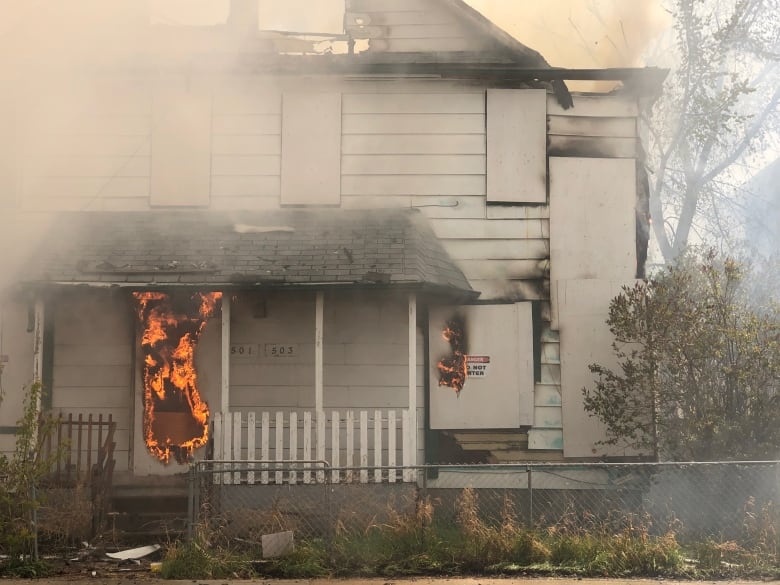 Neighbours at the scene said the home was previously damaged after a fire last year. (Aidan Geary/CBC)

The home where the fire started, which appears to be a three-storey duplex, has been boarded up for more than a year, after it was left structurally unsound by another fire in March 2018, Marchak said.

William Miller, who lives nearby, said he came outside to see what was happening when he smelled smoke and heard commotion from inside his home around 11:15 a.m.

“All of a sudden, standing here, and poof — there was flames coming up all out of the top,” he said. “The building is collapsing before our eyes, right now as we speak.”

The block of Young Street was closed off as emergency crews worked.

Fawcett said he’s grateful his family and the friends who were with them when the fire started are safe and sound.

“Words can’t say enough. I don’t know what to say. Everybody’s OK. That’s the main thing,” he said. “They’re all a little edgy, but everybody’s OK.” 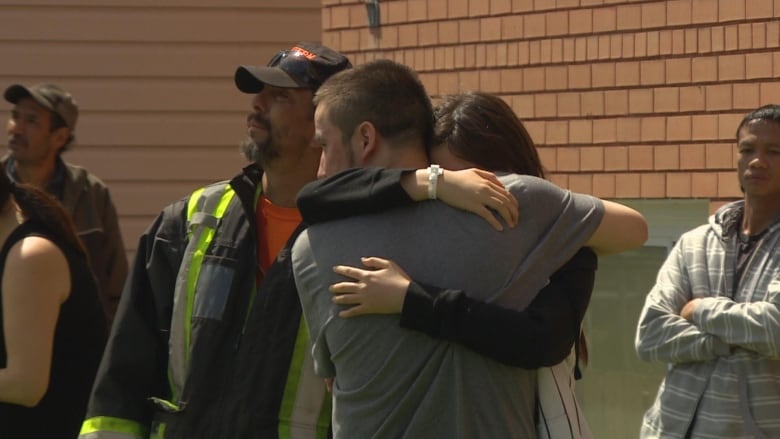 Darren Fawcett’s family and some friends stood across the street and watched the blaze destroy the home next to theirs after being forced out by the fire. (Jaison Empson/CBC)