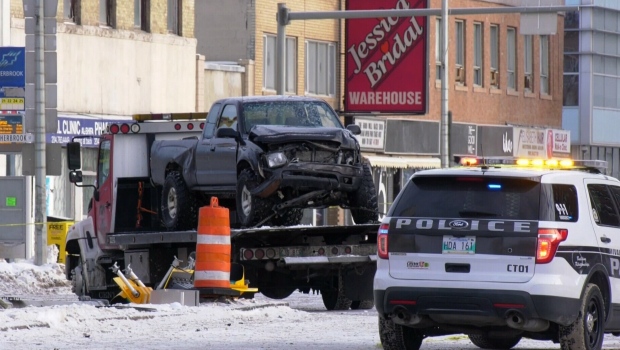 According to police, around 11:35 p.m. on Boxing Day, an officer tried to stop a truck without license plates downtown. The Toyota Tacoma drove off, but the officer did not follow it.

Police said the truck was spotted a short while later on Maryland Street and was then seen travelling westbound on Portage Avenue.

A patrol unit started following the truck from a distance and a police helicopter was called.

Air1 followed the truck for 45 minutes as it drove out to Headingly, Man., via Roblin Boulevard. The vehicle then returned to the city.

At 12:30 a.m., police said the suspect crashed with a car at the intersection of Sherbrook Street and Portage Avenue.

Police said the driver was arrested at the scene and claim he confronted officers with a knife before being hit with a Taser.

The driver and only person in the civilian vehicle did not require medical attention.

The suspect did require medical care as he suffered injuries from the crash. He was taken to hospital and later released into police custody.

Dakota Kenneth Edward Tripp, 28, of Pelican Rapids, Manitoba, has been charged with:

Tripp was detained in custody. No charges have been proven in court.

The Independent Investigation Unit is assuming a monitoring role due to the suspect’s injuries.