The Winnipeg Blue Bombers open training camp July 10th. This is the fifth in our annual positional-preview series leading up to the first day…

No positional group on the roster of the Winnipeg Blue Bombers offers more rock-solid stability than along the offensive line.

And, just to be clear, the men who draw the most pleasure from that fact – outside of the big eaters themselves – are running back Andrew Harris, quarterback Zach Collaros and offensive coordinator Buck Pierce.

Just like their compadres on the defensive line, when this unit was last on the field together they were dominant in their work pushing around the Hamilton Tiger-Cats in a superb Grey Cup performance in which the Bombers absolutely owned the line of scrimmage.

Their collective fingerprints from that game were all over the 405 yards of net offence the Bombers generated that fateful Sunday, including a jaw-dropping 186 along the ground. Harris earned two individual awards with their help, capturing both the game’s MVP and top Canadian honours.

That has been the theme offensively over the last few years: while injuries impacted who lined up behind centre and led to occasional changes in the receiving corps, Bomber fans could always count on Harris and the men up front to grind out real estate along the ground.

While centre Cody Speller has left for the Toronto Argonauts and the promise of more starts – he filled admirably in for regular starter Michael Couture during the playoffs after Couture was injured in the regular season finale – the same crew that bulldozed through 2019 remains intact.

And the fact that that bunch – the durable future hall of fame left tackle Stanley Bryant, up-and-coming guard Drew Desjarlais, Couture, veteran guard Pat Neufeld and steady right tackle Jermarcus Hardrick – will take up their regular spots up front is a big reason why Harris has a shot at his fourth straight rushing crown. It’s why Collaros and Pierce are so eager to work together for a full season.

Yes, a healthy, dominant and well-fed offensive line can help everyone around it sleep better at night. It should also be said that in Canadians Geoff Gray, Tui Eli and Chris Kolankowski, the Bombers’ O-line depth has never been better. Like, never.

All of this is mammoth as camps are about to open for what will be a 14-game season with no preseason contests. Continuity will most certainly matter, especially for a team that draws its offensive identity from bullying people up front. It’s smash-mouth, old-school — however you want to phrase it — but the Blue Bombers have proven it works. 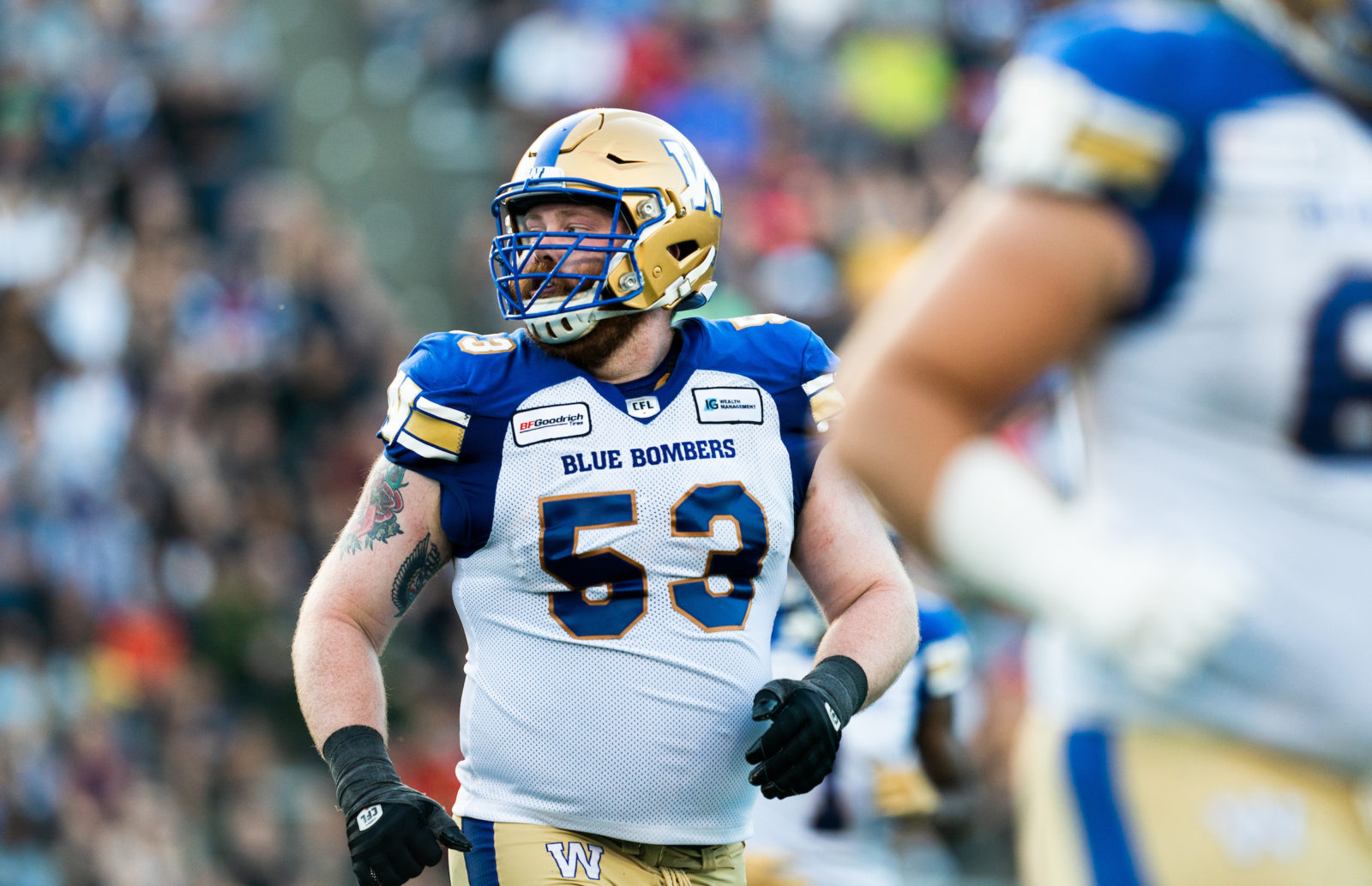 A LOOK AT THE OFFENSIVE LINE

It’s difficult to imagine much change to this unit, not just with the starting five but with those that back them up regularly. If nothing else Machino will be a player to study during camp.

Selected in the second round, 15th overall, of the CFL’s 2021 Global Draft, Machino has the size at 6-5, 299. He’s also the description of ‘project player’ in every sense of the term, having played baseball in high school before not taking up football until he arrived at Kyoto University.

Machino apparently popped off the page at the CFL Combine in Japan and also played for his country at the 2018 World University Championships.

Gray, the University of Manitoba product and 2017 first-round draft pick by the Bombers, earned 12 starts last season for an injured Neufeld. Eli, meanwhile, spent much of 2019 getting back into football mode after missing 2018 with an injury. There’s a sense both men are still just scratching the surface of their potential.

Stanley Bryant has started 90 consecutive games for the Bombers, not missing a single contest since signing here as a free agent in 2015. Given he plays the left tackle position, that’s a remarkable run of consistency.