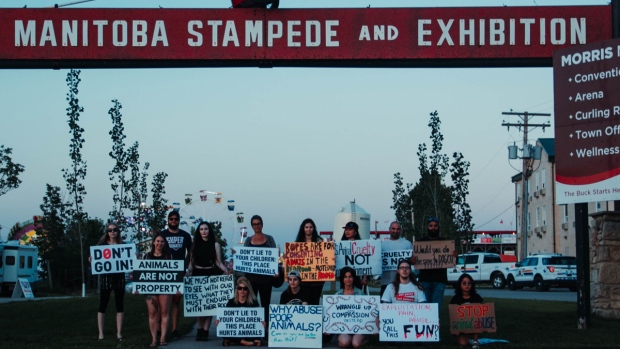 About a dozen animal rights activists stood outside the Manitoba Stampede in Morris, Man. calling for the province’s only professional rodeo to be shut down, Friday night.

Manitoba Animal Save said the entertainment is animal cruelty and argues most of the events create a high risk of injury to the animals.

“It’s certainly abuse. The animals are inflicted with pain and they are afraid, so they are not enjoying any of it. This is not a fun event for animals,” said organizer Kristin Lauhn-Jensen in an interview with CTV News Saturday.

The concern comes after six horses were euthanized following chuckwagon races at the Calgary Stampede earlier in July.

Organizers there are now conducting a review of safety for next year.

The Manitoba Stampede said the animals in its rodeo are not abused, and has made changes to prevent injuries during chuckwagon races, namely that the chuckwagons are smaller and have fewer wagons per heat.

Rodeo Director Mike Bellisle said what happened at the Calgary Stampede is terrible, and he is not aware of any deaths in Morris during the rodeo’s 56-year history.

Bellisle said the Manitoba Stampede has a veterinarian on site and the animals are not in pain.

“There is nothing put on the animal that does anything other than tickle their back end. That’s all there is really is. It’s a sheepshank or a rope that tickles the back end. It just forces the animal to kick,” he said.

Although chuckwagon races are smaller at the Manitoba Stampede, Manitoba Animal Save said the animals are still at risk, and wants them to be considered more than entertainment.

“I think people when they are watching it should really imagine, if you’re watching that calf being roped, their family dog they’re going home to at night, said Lauhn-Jensen.