You Are Here Home news Province has sold off 94 Manitoba Housing properties since 2016, documents show

This downtown Winnipeg high-rise on Smith Street sat empty for over two years before being sold by the province to a private developer. It used to have 373 low-income units. (Austin Grabish/CBC)

The province has sold off 94 properties owned by Manitoba Housing since 2016, according to documents obtained by the Manitoba Liberals through a freedom of information request.

The documents, which were tabled in question period at the Manitoba Legislature Monday, show 94 properties were sold by the Manitoba Housing and Renewal Corporation from January 1, 2016, to October 30th of this year.

The revelation comes as a wait list to get into Manitoba Housing continues to rise. In September, there were 8,449 applicants waiting for public housing — nearly 1,600 more than January of this year, according to another document obtained by the Liberals.

Liberal Leader Dougald Lamont said he regularly talks to people experiencing homelessness because they can’t get into Manitoba Housing. He said public housing is a vital asset the province shouldn’t be selling off.

“It’s incredibly important because some of that is the only affordable housing people can get access to so this really is an incredibly urgent situation,” he said to reporters after raising the issue in question period Monday.

“You have to make sure that you’re actually providing housing for people.”

Families Minister Heather Stefanson said when the Progressive Conservatives took government in the spring of 2016 many public housing buildings were in such bad shape people couldn’t live inside them.

“We inherited serious deteriorating housing stock from the previous NDP government and we have been trying for the last few years to bring that housing stock up to par with being able to house people in it,” she said in an interview with CBC Monday. 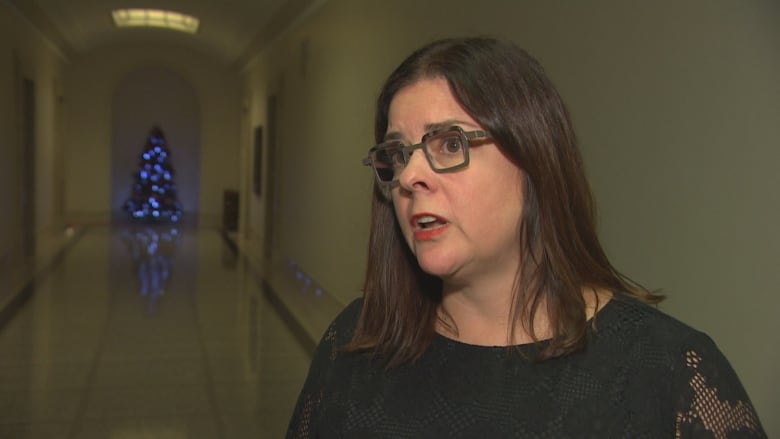 Families Minister Heather Stefanson said many of the buildings were in such bad shape people couldn’t live in them. (Justin Fraser/CBC)

She said her government is partnering with organizations like Habitat for Humanity to provide lease-to-own housing solutions for Manitoba families in addition to partnering with nonprofits who can own buildings themselves.

“We’re looking to partner here to provide better access to Manitoba families. It doesn’t have to be a government-owned unit for a Manitoba family to live in it.” She agreed with Lamont that the number of people on the wait list for public housing is concerning.

“There’s still more work that needs to be done. There’s no question but again it’s not going to happen overnight.”

NDP Leader Wab Kinew said there’s a clear need for the public housing units the government has sold off.

“We know this government has done a very poor job with social housing and affordable housing, didn’t build any units in their first term and now Manitobans are seeing the impacts of that,” he said, citing tent cities that have popped up around Winnipeg.

In 2017, CBC News revealed the province had spent about $3 million on utility and repair costs for a downtown Manitoba Housing high rise that had been sitting empty for more than two years.

The building, which had 373 units, was later sold by the Tories to a private developer and would be one of several Manitoba Housing buildings CBC found were sitting empty despite a growing wait list to get into public housing.

Not all businesses rushing to reopen their doors as restrictions ease