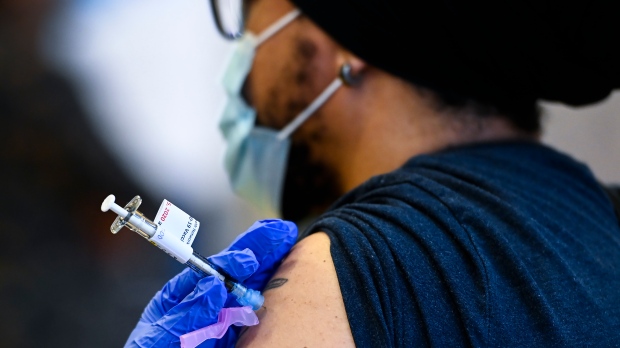 OTTAWA — Canadians who are fully vaccinated against COVID-19 can hug each other, attend barbecues and have a small group of friends over for dinner without wearing a mask or staying apart, but might still want to protect themselves at crowded concerts, sports events or house parties, public health officials say.

The Public Health Agency of Canada released guidelines Friday on what those who have had two shots against COVID-19 can do as Canada’s vaccination rates climb.

At an earlier news conference, Prime Minister Justin Trudeau announced 26 per cent of Canadians eligible for a vaccine have had both of their shots, giving them their best chance protection against the virus.

More than 76 per cent of those eligible have also received a single shot, he said.

To date, Canada has delivered 43 million vaccine doses to provinces, which are rolling out inoculation campaigns. The federal government expects to hit 50 million deliveries by the end of June, and 68 million by the end of July.

With more vaccines streaming into the country, provinces have begun lifting health restrictions to allow more people to socialize, putting pressure on the agency to release guidelines around what those who are fully vaccinated against COVID-19 can do safely.

The agency’s advice outlined scenarios using an infographic for when people should wear masks and physically distance, based on their own vaccination status and whether those around them have been immunized.

For example, it says someone who meets people who are double-dosed for a small outdoor gathering, like a family BBQ, doesn’t need to physically distance or wear a mask, regardless of vaccination status.

When going over to a house with a small group of family or friends who are fully vaccinated to watch hockey or have dinner, the agency said those who have had two shots don’t need to wear a mask or worry about getting too close.

People without both shots can consider doing the same, it says, if everyone feels OK and there’s no one at risk of more severe illness.

In outdoor settings where people with unknown vaccination statuses from different households are mixing, say at a wedding or soccer game, the agency advises someone who is fully vaccinated not needing to mask up.

It lists that people who are partially or unvaccinated should think about keeping it on if they cannot physically distance.

When it comes to going to a concert where there will be a crowd, the agency says people who are fully vaccinated might still want to think about keeping their mask in if they are indoors, even if they don’t have any underlying conditions.

For going to gyms and places of worship, the agency says people who have had both of their shots should put on a mask if they are at a greater risk of illness, and still try and keep doors and windows open.

Those not fully vaccinated in these centres should wear a mask.

Tam stressed people need to follow the health advice and rules coming from her provincial counterparts, as those are designed to deal with how the pandemic is unfolding in a specific community.

Data currently shows the number of infections and hospitalizations continue to fall across the country, as more Canadians get vaccinated against COVID-19.

Federal health officials say the Delta variant is the “latest hurdle” to the country’s fight in the pandemic, and could cause hospital capacity to be exceeded if it takes hold throughout the fall and winter.

The government’s modelling was based on assumptions the strain is more transmissible than other variants of concern, and leads to more severe illness based on its spread in the United Kingdom.

Tam says the Delta variant is the most contagious strain seen to date and its presence has increased in Canada.

Federal data shows most of the cases are found in people who haven’t been vaccinated against COVID-19 or only have one shot.

This report by The Canadian Press was first published June 25, 2021.