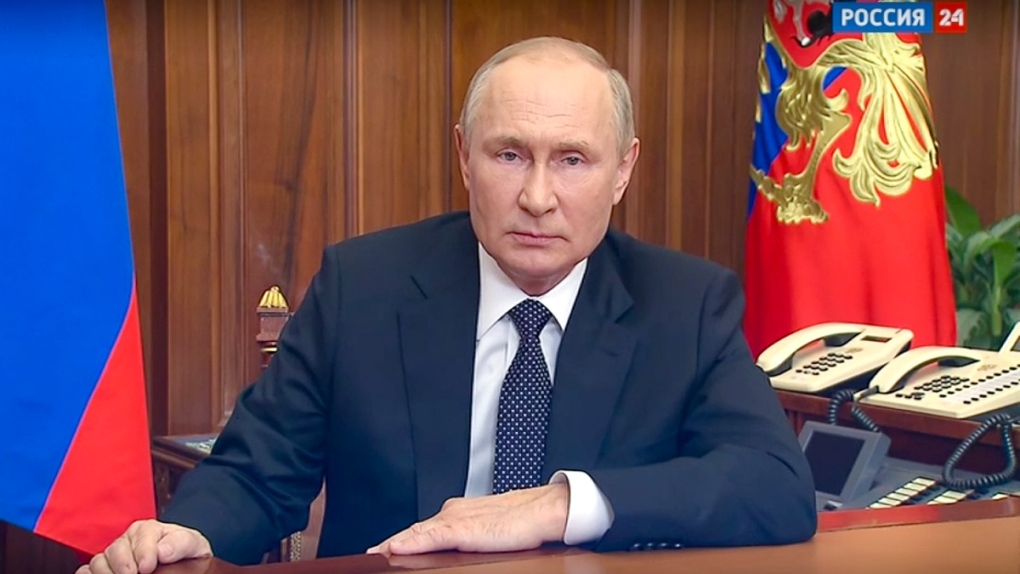 Russian President Vladimir Putin ordered a partial mobilization of reservists in Russia on Wednesday, risking a deeply unpopular step that follows a string of humiliating setbacks for his troops nearly seven months after invading Ukraine.

It’s the first mobilization in Russia since the Second World War and is sure to further fuel tensions with the Western backers of Ukraine, who derided the move as an act of weakness. The move also sent Russians scrambling to buy plane tickets out of the country.

The Russian leader, in a seven-minute televised address to the nation aired on Wednesday morning, also warned the West that he isn’t bluffing over using all the means at his disposal to protect Russia’s territory, in what appeared to be a veiled reference to Russia’s nuclear capability. Putin has previously warned the West not to back Russia against the wall and has rebuked NATO countries for supplying weapons to help Ukraine.

The total number of reservists to be called up could be as high as 300,000, officials said.

Even a partial mobilization is likely to increase dismay, or sow doubt, among Russians about the war in Ukraine. Shortly after Putin’s address, Russian media reported a sharp spike in demand for plane tickets abroad amid an apparent scramble to leave despite exorbitant prices for flights.

Kremlin spokesman Dmitry Peskov, who was asked what had changed since he and others previously said no mobilization was planned, argued that Russia is effectively fighting against a combined potential of NATO because the alliance’s members have been supplying weapons to Kyiv.

Only those with relevant combat and service experience will be mobilized, Russian Defence Minister Sergei Shoigu said. He added that there are around 25 million people who fit this criteria, but only around 1% of them will be mobilized.

Another clause in the decree prevents most professional soldiers from terminating their contracts and leaving service until the partial mobilization is no longer in place.

Putin’s announcement came against the backdrop of the UN General Assembly in New York, where Moscow’s invasion of Ukraine on Feb. 24 has been the target of broad international criticism that has kept up intense diplomatic pressure on Moscow.

Ukrainian President Volodymyr Zelenskky is due to address the gathering in a prerecorded address on Wednesday. Putin didn’t travel to New York.

Putin’s gambit has a strong element of risk — it could backfire, by making the Ukraine war unpopular at home and hurting his own standing, and it exposes Russia’s underlying military shortcomings.

A Ukraine counteroffensive launched this month has snatched the military initiative away from Russia, as well as capturing large areas the Russians once held. The swiftness of the counteroffensive saw Russian forces abandon armoured vehicles and other weapons as they beat hasty retreats.

A spokesman for Zelenskyy called the mobilization a “big tragedy” for the Russian people.

In a statement to The Associated Press, Sergii Nikiforov said conscripts sent to the front line in Ukraine would face a similar fate as ill-prepared Russian forces who were repelled in an attack on Kyiv in the first days of the invasion last February.

“This is a recognition of the incapacity of the Russian professional army, which has failed in all its tasks,” Nikiforov said.

The mobilization is unlikely to bring any consequences on the battlefield for months because of a lack of training facilities and equipment.

The U.S. ambassador to Ukraine, Bridget Brink, tweeted that the mobilization is a sign “of weakness, of Russian failure.”

British Defence Secretary Ben Wallace echoed that assessment, describing Putin’s move as “an admission that his invasion is failing.”

Russian political analyst Dmitry Oreshkin said Putin’s announcement smacked of “an act of desperation.” He predicted that Russians will resist the mobilization through “passive sabotage.”

The announcement won’t go down well with the general public, Oreshkin said, describing it as “a huge personal blow to Russian citizens, who until recently (took part in the hostilities) with pleasure, sitting on their couches, (watching) TV. And now the war has come into their home.”

The head of the Duma defence committee, Andrei Kartapolov, said there would be no additional restrictions on reservists leaving Russia based on this mobilization, according to Russian media reports. Kartapolov said he wanted to “calm” people about the mobilization.

The partial mobilization order came a day after Russian-controlled regions in eastern and southern Ukraine announced plans to hold votes on becoming integral parts of Russia — a move that could set the stage for Moscow to escalate the war following Ukrainian successes.

The referendums, which have been expected to take place since the first months of the war, will start Friday in the Luhansk, Kherson and partly Russian-controlled Zaporizhzhia and Donetsk regions.

The ballots are all but certain to go Moscow’s way.

The war, which has killed thousands of people, has driven up food prices worldwide and caused energy costs to soar. It has also brought fears of a potential nuclear catastrophe at Europe’s largest nuclear plant in Ukraine’s now Russia-occupied southeast. Investigations are also underway into possible atrocities committed by Russian forces in Ukraine.

In his address, which was far shorter than previous speeches about the Ukraine war, Putin accused the West of engaging in “nuclear blackmail” and noted “statements of some high-ranking representatives of the leading NATO states about the possibility of using nuclear weapons of mass destruction against Russia.”

He didn’t identify who had made such comments.

“To those who allow themselves such statements regarding Russia, I want to remind you that our country also has various means of destruction, and for separate components and more modern than those of NATO countries and when the territorial integrity of our country is threatened, to protect Russia and our people, we will certainly use all the means at our disposal,” Putin said.

Foreign leaders have described the ballots as illegitimate and nonbinding. Zelenskyy said they were a “sham” and “noise” to distract public attention.

Putin said he has already signed the decree for partial mobilization, which is due to start on Wednesday. A full-scale mobilization would likely be unpopular in Russia and could further dent Putin’s standing after the recent military setbacks in Ukraine.

“We are talking about partial mobilization, that is, only citizens who are currently in the reserve will be subject to conscription, and above all, those who served in the armed forces have a certain military specialty and relevant experience,” Putin said.

Shoigu, the Russian defence minister, also said that 5,937 Russian soldiers have died in the Ukraine conflict, far lower than Western estimates that Russia has lost tens of thousands.

The Vesna opposition movement called for nationwide protests on Wednesday, saying “Thousands of Russian men — our fathers, brothers and husbands — will be thrown into the meat grinder of the war. What will they be dying for? What will mothers and children be crying for?”

It was unclear how many would dare to protest amid Russia’s overall suppression of opposition and harsh laws against discrediting soldiers and the military operation.

(138)
$15.99 (as of September 24, 2022 10:44 GMT -05:00 - More infoProduct prices and availability are accurate as of the date/time indicated and are subject to change. Any price and availability information displayed on [relevant Amazon Site(s), as applicable] at the time of purchase will apply to the purchase of this product.)

(104196)
$30.15 (as of September 24, 2022 10:44 GMT -05:00 - More infoProduct prices and availability are accurate as of the date/time indicated and are subject to change. Any price and availability information displayed on [relevant Amazon Site(s), as applicable] at the time of purchase will apply to the purchase of this product.)

(27133)
$29.99 (as of September 24, 2022 10:44 GMT -05:00 - More infoProduct prices and availability are accurate as of the date/time indicated and are subject to change. Any price and availability information displayed on [relevant Amazon Site(s), as applicable] at the time of purchase will apply to the purchase of this product.)

(168402)
$27.89 (as of September 24, 2022 10:44 GMT -05:00 - More infoProduct prices and availability are accurate as of the date/time indicated and are subject to change. Any price and availability information displayed on [relevant Amazon Site(s), as applicable] at the time of purchase will apply to the purchase of this product.)

(3082)
$9.70 (as of September 24, 2022 10:44 GMT -05:00 - More infoProduct prices and availability are accurate as of the date/time indicated and are subject to change. Any price and availability information displayed on [relevant Amazon Site(s), as applicable] at the time of purchase will apply to the purchase of this product.)