1. BUILT FORD TOUGH: The Blue Bombers Canadian depth was bolstered Friday by the signing of defensive back Tyrell Ford, the club’s first pick, 13th overall, in this year’s CFL Draft.
Ford joins the Blue Bombers after attending mini-camps with both the New York Jets and Pittsburgh Steelers and brings a quiet confidence that we touched on in a previous interview. 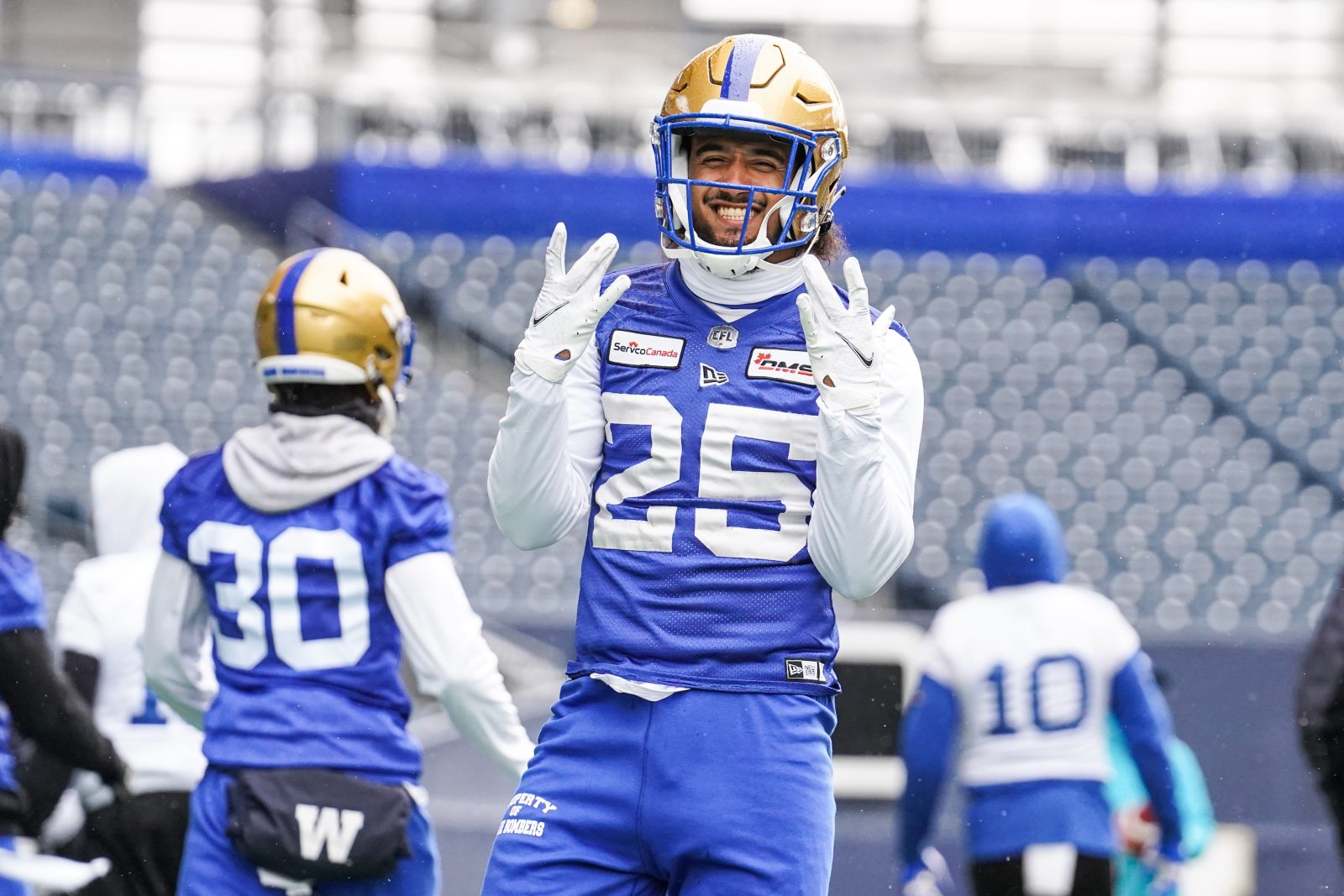 “I’m a competitive guy and want to get on the field,” Ford told a media throng after practice on Friday. “I obviously want to try to start at corner, whatever side it is, and contribute on special teams, which is a big part of it. But I just want to get out there and compete and be a big part of the three-peat.
“I know it’s a big step from university and there’s lots of moving parts, but once I get the playbook down I think I can definitely contribute to the team.”
The Blue Bombers traded out of the first round on draft day, moving their ninth overall pick and their second-round selection, 18th overall, to the Montreal Alouettes for defensive lineman Cam Lawson and the 13th overall pick. Landing Ford at that spot was seen as a coup.
“The first thing is his off-the-charts numbers in terms of his athleticism,” said head coach Mike O’Shea. “That ties in with when you watch the film the Ford brothers are pretty prominent twins for a number of years — it’s not like they just sort of popped onto the radar all of a sudden. These are guys that you noticed every time you watched film in previous draft classes, they showed up all the time on the film of somebody else you were watching. You throw in the combine and what he did there and he answered some questions about his cover-ability and then you interview him and Tyrell’s interview was just excellent. He’s a really good kid.”
Ford totalled six interceptions while playing for the University of Waterloo Warriors and was also a dangerous kick returner. His 40-time — 4.42 — was also the fastest at the  CFL Combine.

2. THE FIGHT FOR WORK: Periodically during training camp we’ll briefly check in on one of the positional battles brewing and we open today with a look at the cornerback spot left vacant by the departure of DeAundre Alford to the Atlanta Falcons.
The Blue Bombers found some gold last year in their annual talent search, finding both Alford and Deatrick Nichols in the offseason and then having both morph into CFL All-Stars in their first stint in three-down football. There are 25 defensive backs in training camp, with the starting crew on Friday featuring Nick Hallett at safety, Nichols and Nick Taylor at halfback, with Winston Rose and Tyqwan Glass at corner.
The arrival of Tyrell Ford does give the club more options, including using a Canadian at corner — including Patrice Rene — but Glass’ experience and his play through two sessions has been impressive. 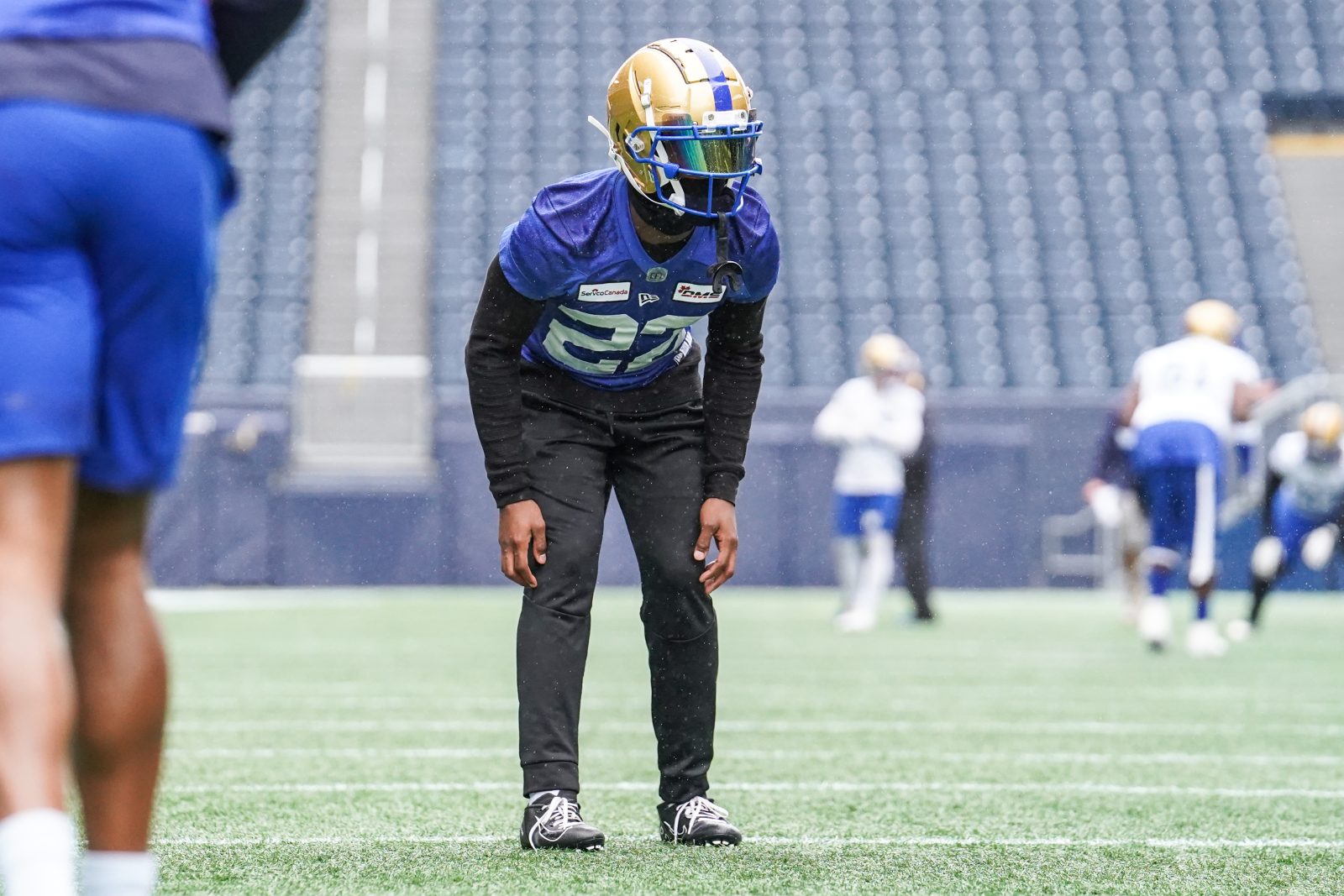 “It’s been two days, so… But, he’s noticeable,” said O’Shea. “He had a pick, he broke on a route really well and went up and got the ball. He’s a vet. He understands the game. We’ll see if we can move him around a little bit, but obviously he has an upper hand on a lot of guys because he understands the CFL game.”

3. FYI: Global punter Tom Hackett is not back in camp yet, as he returned to Utah during the strike to be with his parents who had planned a visit. The expectation is he will return. “We’re in communication with him,” said O’Shea. “He had some family things to take care of.”… WR Carlton Agodusi, who spent last year on the practice roster, made a spectacular catch early on Friday, but came up injured and did not return… O’Shea on safety Brandon Alexander, who is recovering from offseason surgery and not practising, but has been very engaged in camp. “He is an amazing leader. He’s that guy that helps put it all together from Richie and JY and James’ scouting report. When they’re out of the building BA just manages to keep them all together and do the right things to make sure they’re spending the extra time. He’s invaluable.”… There are only nine linebackers in camp, including veterans Adam Bighill, Kyrie Wilson, Shayne Gauthier, Jesse Briggs (reporting after his wife gives birth), second-year pros Tanner Cadwallader and Les Maruo along with Eric Mezzalira, Darian Taylor and Malik Clements, who played seven games with the Edmonton Elks last season. Here’s O’Shea on Clements: “We put on the film he was just a guy that showed up on the film all the time. That kind of style of play is something we like. Now, how it fits here… I just thought he probably deserved another chance.”… Saturday’s practice time at IG Field goes from 8:30 a.m.-12:30 p.m. and is open to the public.

4. QUOTABLE: One more from Ford, who could face his twin brother in Winnipeg’s first preseason game next Friday at IG Field against the Edmonton Elks. Tre Ford, FYI, is a quarterback.
“I guess people might look at it and make it bigger than it is,” said Ford. “He’s a player, I’m a player. We’re on different teams. We’re just ging to go out there and compete. It’s all love at the end of the day.”
And if he managed to intercept his brother?
“I’d probably keep the ball, sign it, and give it to him.”

(9634)
$13.99 (as of June 30, 2022 10:08 GMT -05:00 - More infoProduct prices and availability are accurate as of the date/time indicated and are subject to change. Any price and availability information displayed on [relevant Amazon Site(s), as applicable] at the time of purchase will apply to the purchase of this product.)

(383)
$35.99 (as of June 30, 2022 10:08 GMT -05:00 - More infoProduct prices and availability are accurate as of the date/time indicated and are subject to change. Any price and availability information displayed on [relevant Amazon Site(s), as applicable] at the time of purchase will apply to the purchase of this product.)

(5557)
$5.95 (as of June 30, 2022 10:08 GMT -05:00 - More infoProduct prices and availability are accurate as of the date/time indicated and are subject to change. Any price and availability information displayed on [relevant Amazon Site(s), as applicable] at the time of purchase will apply to the purchase of this product.)

(3689)
$2.99 (as of June 30, 2022 10:08 GMT -05:00 - More infoProduct prices and availability are accurate as of the date/time indicated and are subject to change. Any price and availability information displayed on [relevant Amazon Site(s), as applicable] at the time of purchase will apply to the purchase of this product.)

(4407)
$6.97 (as of June 30, 2022 10:08 GMT -05:00 - More infoProduct prices and availability are accurate as of the date/time indicated and are subject to change. Any price and availability information displayed on [relevant Amazon Site(s), as applicable] at the time of purchase will apply to the purchase of this product.)