1. CBA TALK: The Blue Bombers were on the practice field Tuesday despite the latest collective-bargaining agreement being rejected in a league-wide vote after it had been endorsed by the CFL Players’ Association negotiating committee. The league has since made a counter-proposal to the CFL Players’ Association, with a deadline of 11 p.m. Thursday night.
The deadline for that vote comes less than 24 hours before the club’s first preseason game Friday night vs. the Edmonton Elks.
Blue Bombers president and CEO Wade Miller did issue a statement Thursday during practice:

We are optimistic that Friday’s pre-season game will be played as scheduled. Once we have further information, we will provide you with more details.

“It’s back to the drawing board to a certain degree here,” said Blue Bombers linebacker Adam Bighill, who is a member of the CFLPA executive. “We realize we’ve got to get a deal figured out so we can move forward. We’re still at the table and we’re working through some stuff.
“… Everyone feels urgency. I know guys want to play. I know teams want to make money. I know fans want to come watch the game. We want to play in front of fans. This is important to everybody, so I do hope the urgency is on both sides to get it done.”
Blue Bombers veteran defensive tackle Jake Thomas is one of the club’s CFLPA reps and he said the key issues seem to be the drop in the number of Canadian starters, the number of padded practices, as well as the collective wanting a ratification bonus for signing a new deal.
“We’re a unique league where we have Americans, we have Canadians, we have Globals,” said Thomas. “Across our team we would have had more Americans than Globals and Canadians, so I don’t think it’s just a Canadian issue. It’s just across the league guys didn’t feel comfortable with the deal. Luckily we still have a few more days to get it done.
“It could have been the best deal in the world and still people are going to have issues with it. Obviously the deal wasn’t good enough, so we’ve got to get back and get back to work so we can get a deal that’s good enough for our players to get back out here in front of these fans that love this game.”
Thomas also said it’s a misrepresentation to suggest that this is a Canadian vs. American issue, and that Canadians voted down the deal as a group across the league.
“I haven’t paid too much attention to social media (where that narrative first appeared), but I know we haven’t had any issues in this locker room,” he said. “People have brought it up. A lot of people think it was Canadians that just voted this deal down, but I know across our locker room some Canadians said yes and some Americans said no. Everyone is just looking for the best deal possible, but I don’t think there’s any hostility. If there was hostility you wouldn’t see us here today. We’re still here ready to work. Hopefully a deal gets done, but I don’t think it was a Canadian rally to get this deal turned down.”

2. MEANWHILE…: The Blue Bombers went about their business on Tuesday — just as teams across the CFL did — knowing that Friday’s preseason game could be impacted. Remember, the club was initially scheduled to open its preseason in Regina on Victoria Day, but that game was postponed until next Tuesday.
“We practised, so as long as we’re out there working it’s all right,” said head coach Mike O’Shea. “I’m sure something will get resolved. I don’t think it frustrates the coaching staff because it’s not something we can control, so why waste your time and energy with something you can’t do anything about.
“We’re preparing like we’re playing. And if they say no… I don’t think you’d do it the other way and wait around and then ‘Oh, shoot, we’re playing. Let’s get practising.’ We’re ready to go right now.”

3. STEP RIGHT UP: No word on the extent of DB Mercy Maston’s injury. ICYMI, the club’s ‘Dime’ back had to be carted off the field on Monday after pulling up in pass protection. Maston played a pivotal role in that position in the club’s run to a championship in 2019, but missed all of last year after suffering an Achilles injury in training camp.
“I’m not going to give an update just yet,” said O’Shea. “I’m going to wait a little bit.”
Getting a lot of work in Maston’s spot on Tuesday was Donald Rutledge, Jr., who played his senior season at Georgia State before getting NFL looks from Indianapolis in 2020 and Arizona last year. Asked what he liked about Rutledge, Jr., O’Shea said: “Right now, his versatility. He’s jumped in at bunch of different spots. One thing that was impressive is one day he basically put himself in at a different spot — there was a guy short so he jumped in and he ran the play very well, executed the assignment very well. We hadn’t put him there and hadn’t really talked about it (putting him there). So, obviously he’s absorbing the material very quickly.
“Where he slots in in the preseason, we’ll see, but we’ll probably play him at a few different spots.”
The Blue Bombers made a trade last year to acquire Alden Darby from the Toronto Argonauts after the Maston injury, and Darby went on to be named to the CFL All-Star Team. He then signed with the Hamilton Tiger-Cats in free agency. Asked if he thought the Blue Bombers have an answer to replace Maston in house if his injury is serious, O’Shea didn’t hesitate.
“Absolutely. Right now, for sure,” he said. “We like a lot of guys in camp. Generally speaking if they make it to this level they’re pretty good football players and it’s our job as coaches to figure out where they best fit and how they best help the team. Especially defensively Richie (Hall, defensive coordinator) and his guys have always shown the ability to move pieces around and find out how versatile everybody can be.”

4. FYI: No sign yet of Global punter Tom Hackett, who looked solid in rookie camp before returning home for personal reasons. Asked for an update as to his possible return, O’Shea said:  “We’ll see. I know he spoke to Kyle (Walters, GM) today. It’s interesting… you get guys who are new to the CFL who are going through a work stoppage, then a potential CBA being ratified and then not, so it can be a little confusing. I imagine we’ll probably see him again.”… CB Winston Rose was wearing Mercy Maston’s #7 as a show of support on Tuesday. “If you’ve been around us you’ll see guys wearing jerseys of (other) guys,” said O’Shea. “I mean, Yoshi (Jermacus Hardrick) had (Greg) Ellingson’s jersey on… it didn’t look very good, but he was wearing it.”… A long list of receivers did not practice on Tuesday, including Ellingson, Kelvin McNnight, Brendan O’Leary-Orange, Jalen Saunders and B.J. Muckelvene. Their absences allowed Dalton Schoen to get more work, and he had a good day, as did Blake Jackson. 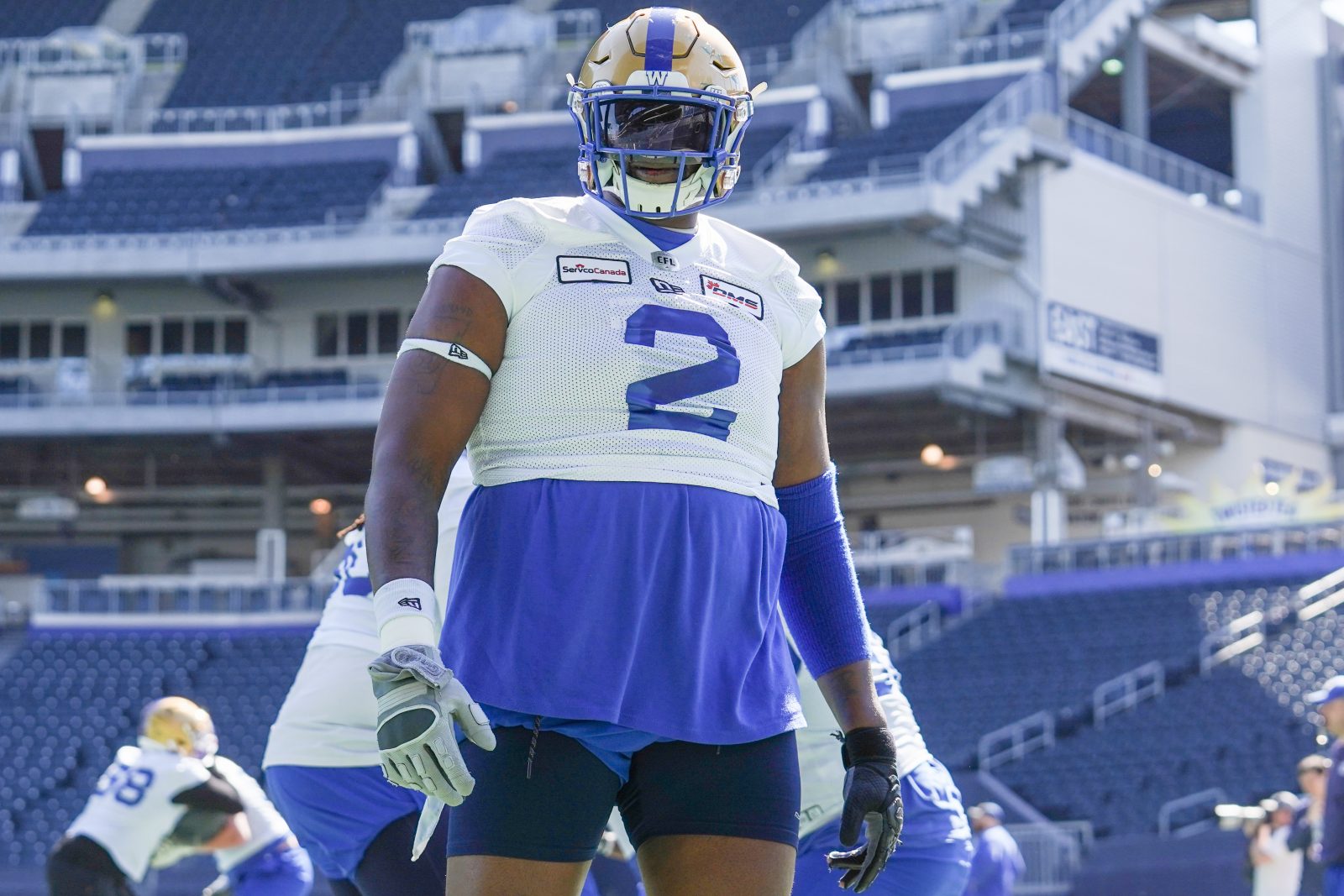 (2829)
$22.99 (as of June 29, 2022 10:08 GMT -05:00 - More infoProduct prices and availability are accurate as of the date/time indicated and are subject to change. Any price and availability information displayed on [relevant Amazon Site(s), as applicable] at the time of purchase will apply to the purchase of this product.)

(9633)
$13.99 (as of June 29, 2022 10:08 GMT -05:00 - More infoProduct prices and availability are accurate as of the date/time indicated and are subject to change. Any price and availability information displayed on [relevant Amazon Site(s), as applicable] at the time of purchase will apply to the purchase of this product.)

(8066)
$13.99 (as of June 29, 2022 10:08 GMT -05:00 - More infoProduct prices and availability are accurate as of the date/time indicated and are subject to change. Any price and availability information displayed on [relevant Amazon Site(s), as applicable] at the time of purchase will apply to the purchase of this product.)

(5667)
$29.97 (as of June 29, 2022 10:08 GMT -05:00 - More infoProduct prices and availability are accurate as of the date/time indicated and are subject to change. Any price and availability information displayed on [relevant Amazon Site(s), as applicable] at the time of purchase will apply to the purchase of this product.)