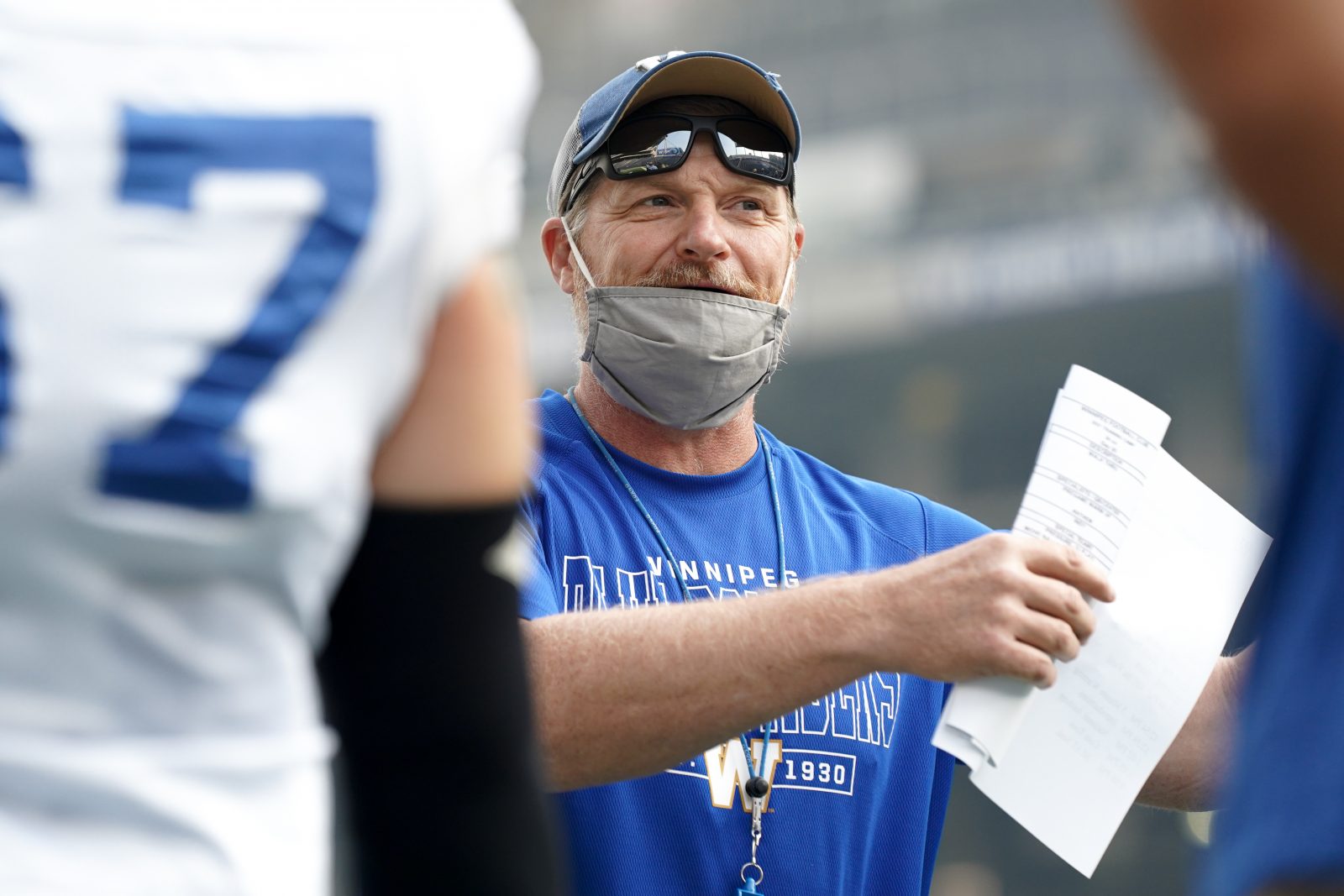 5 Quick Hits from Monday — Day 1 of the Blue Bombers practice week leading up to Friday’s meeting with the Toronto Argonauts at IG Field:

1. STEP AWAY FROM THE PANIC BUTTON: It’s pure folly to read anything into who is not on the field on the first day of a practice week, but the list of those who did not participate on Monday was long.
In addition to Andrew Harris and Darvin Adams, OL Pat Neufeld, DE Willie Jefferson, LB Kyrie Wilson, DT Steven Richardson, DB Josh Johnson and WR/KR Janarion Grant also joined the list of spectators.
Bombers head coach Mike O’Shea said Harris is ‘progressing well’ and that Adams ‘is looking good. I’m expecting him to be feeling really good soon.’ Johnson and Grant were injured in Thursday’s win over Hamilton and the coach said he’s uncertain if that pair will return to practice this week. As for the rest, part of this is maintenance after returning to action following a long stint without games.
“I expect that’s going to be the answer for a lot of these guys just because it’s the first game and with no exhibition they’re still sorting out that time off, really, with their bodies. We give them days and with it raining they don’t really need to be out there standing in the rain.”
For what it’s worth, the club had Tui Eli working at Neufeld’s right guard spot, while Mike Jones was at time, with Josh Miller moving into the corner spot opposite DeAundre Alford. WR Kelvin McKnight was also getting more work with the starting offence.

2. THUMBS UP: There are no perfect games in football and that’s why teams often talk about the areas that need to be ‘cleaned up’ even after a solid win like the one the Bombers posted last week.
That said, with no preseason games and with the entire 2020 CFL season wiped out because of the pandemic, a coach can’t be particularly picky, either.
“There’s always stuff to work on after every game in every regular year,” said O’Shea. “So, 600-and-something days between games… we’ll take that. We’ll take this win and look at the things we have to correct as being not as big as you may think for being 600 days between. It was, overall, fairly pleasing.”

3. KICKING CHATTER: There has been a lot of ‘discussion’ since Thursday’s win about Coach O’Shea’s decision not to try some longer field goals, but instead have punter Marc Liegghio kick for field position.
Asked Monday if he had to get confidence in his new placekicker in Tyler Crapigna, O’Shea said:
“I’ve got confidence in it. I just think the way the game went, the way it was being played out it was going to be more of a field-position battle and I thought defensively we were doing quite well. The flow of the game and the way I was reading the flow of the game just dictated we keep trying to pin them and Marc did a good job punting and putting the ball out of bounds so it was limiting their returns.
“You limit their ability to create a spark. Hamilton does a really good job of creating explosive plays in all phases and so if you can try and limit that, that’s important. I’ve got confidence in our kicking game and you’ll see him trotted out whatever distance I feel comfortable in that game and what the game dictates.”
Crapigna said Monday that on a perfect day his range would be 55-yards out and in, but also said he understood why the coaching staff opted to play the field-position game.
“Our defence was playing a solid game and obviously coach knows what he’s doing and he wanted to hem them in there with the way the defence was playing,” Crapigna said. “At the end of the day you want to get out there and make those field goals, but he knows what he’s doing and he elected to do that, so there’s really nothing I can say.
“… at the end of the day whenever he calls my number that’s when I’ll be ready to go.”

4. FYI: The Bombers registered one sack in last week’s win and it came from newcomer Casey Sayles, a DT who has bounced from the NFL to the Alliance of American Football to the XFL and now the CFL.
“It’s tough. It’s a grind,” said Sayles. “I’ve got a lot of buddies that just called it quits because it’s tough bouncing around cities going around the United States and you’ve got family that doesn’t know what you’re going to do, you don’t know what you’re going to do and you’ve got to find a job in between. It’s a tough adjustment to keep going.
“I’m very blessed to be on a team right now. I had a very hard and focussed training camp to make sure I made the team.”
Sayles has already earned solid praise from his boss.
“All through training camp he emerged as the guy we really liked behind ‘Stove’ (Steven Richardson),” said O’Shea. “He brings a different size dimension, he’s athletic and he’s got a real workmanlike approach. I don’t know if there’s a ton of finesse, but he manages to get to where he needs to go and does it quickly with power and strength. It was nice to see him get his first sack. That was pretty cool.”

5. UGLY NUMBERS: Some interesting stats-related facts emerged from Ottawa’s win in Edmonton on the weekend, a game in which the REDBLACKS passed for just 71 yards.
That was the lowest passing total for a winning team since the Bombers threw for just 56 yards in a 17-16 win over Calgary at old Winnipeg Stadium.
Looking back at that game in ’92 the weather conditions were horrible with gusting winds. Matt Dunigan was injured in that game and the Bombers two other QBs struggled in the conditions — Sam Garza was 0-7 and Danny McManus was 4 for 14 for 56 yards. But the Bombers did rush 36 times for 243 yards, with Michael Richardson carrying the bulk of the load with 193 yards on 27 carries and Warren Hudson adding 45 more on seven carries.
Interestingly, that game was a Grey Cup preview, with the Stamps winning 24-10.

(101)
$7.49 (as of September 17, 2021 10:38 GMT -05:00 - More infoProduct prices and availability are accurate as of the date/time indicated and are subject to change. Any price and availability information displayed on [relevant Amazon Site(s), as applicable] at the time of purchase will apply to the purchase of this product.)

(181)
$9.99 (as of September 17, 2021 10:38 GMT -05:00 - More infoProduct prices and availability are accurate as of the date/time indicated and are subject to change. Any price and availability information displayed on [relevant Amazon Site(s), as applicable] at the time of purchase will apply to the purchase of this product.)

(79)
$29.97 (as of September 17, 2021 10:38 GMT -05:00 - More infoProduct prices and availability are accurate as of the date/time indicated and are subject to change. Any price and availability information displayed on [relevant Amazon Site(s), as applicable] at the time of purchase will apply to the purchase of this product.)

(2578)
$5.99 (as of September 17, 2021 10:38 GMT -05:00 - More infoProduct prices and availability are accurate as of the date/time indicated and are subject to change. Any price and availability information displayed on [relevant Amazon Site(s), as applicable] at the time of purchase will apply to the purchase of this product.)

(194)
$9.99 (as of September 17, 2021 10:38 GMT -05:00 - More infoProduct prices and availability are accurate as of the date/time indicated and are subject to change. Any price and availability information displayed on [relevant Amazon Site(s), as applicable] at the time of purchase will apply to the purchase of this product.)