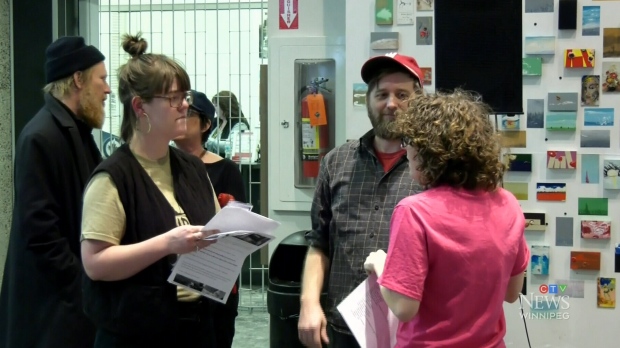 WINNIPEG — More than a hundred people rallied inside the lobby of Millennium Library Tuesday evening, protesting the airport-style security measures that came into effect one year ago.

The event was organized by the group Millennium for All which has voiced concerns the screening measures alienate vulnerable people.

“We wanted to mark (the anniversary) with celebration, mourning and resolve to keep pressuring the powers that be to take the security barriers down,” said musician and activist John Samson.

Last year, the city beefed up security, adding bag searches and metal detectors, after a rise in serious incidents, including harassment and assaults.

Data from the city obtained by CTV News appear to show the number of incidents is down, but so is attendance.

“(The security measures) exclude people very clearly, especially people from marginalized communities and people who aren’t comfortable being screened to go into a public, free place that should be open to everyone,” said Samson.

“I certainly understand there are safety concerns, but the way to make a safer library is to invest more, to hire more librarians and fund services for marginalized people within the building.”

But some Millennium Library users said they feel safer because of the ramped up security.

“Before they started this security screening system there were people who threatened to beat me up because I asked them to keep quiet,” said Ashoke Dasgupta, who has been going to the library for 22 years.

Ray Singer works in addiction outreach and said the city could have better handled the situation by meeting with marginalized people.

“I think libraries are a hugely important part of our society and our culture. I’m just appalled by what’s happened in terms of the profiling and screening of people.”

In a statement, a spokesperson for the city said the Winnipeg Public Library Board is launching a review of the screening measures.

“The security screening was put in place with intentions of keeping all who visit safe. Reviewing the procedures a year after being implemented allows us to improve, and change our approach if needed,” the spokesperson said. “The City is listening to the feedback we’ve received from community groups and will incorporate their considerations as we move forward in our evaluation of the screening process.”

The city also said it’s adding a community space in the library.