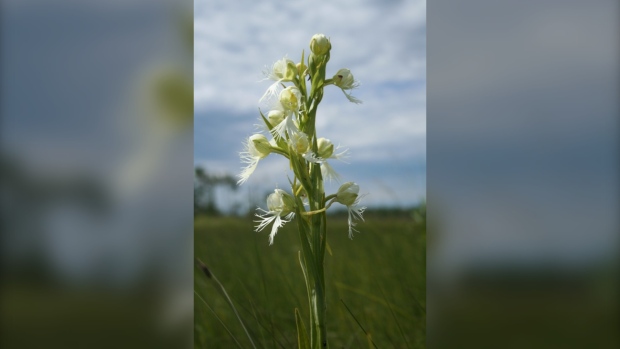 A rare legal battle is pitting a Manitoba landowner against the preservation of a flower.

The western prairie fringed orchid is an endangered species – the only place it can be found in Canada is in a southeastern pocket of the province near Vita, Man.

An area farmer was charged in June after he cultivated the land where it grows. The case is now before the courts.

In an email to CTV News, a provincial spokesperson said it made a number of efforts to engage landowners about the orchid, providing maps and flagging where it grows.

“However, despite being advised about the presence of the orchids last year and reminded that the land could not be tilled, one landowner proceeded with cultivation. As such, they were charged under the Endangered Species and Ecosystems Act,” said the spokesperson.

“Once it’s gone, it’s gone forever and the legislation is written to prevent that destruction.”

The farmer now faces a fine or jail time.

‘This is not a large corporate farm’: Farmer’s lawyer

In a letter to Sustainable Development obtained by CTV News, the farmer’s lawyer requests either an exemption to the act or that a prevention order be set aside.

The letter said the order is indefinite in duration and seemingly encompasses the farmer’s entire 160 acres of land.

“This is not a large corporate farm. As is typical in the Amish community farming is done to meet the most basic needs of the family,” the letter said.

The provincial spokesperson said less than 10 acres on the property in question is affected.

Lucie Maynard is the CAO with the Rural Municipality of Stuartburn, which sold the 160 acres of land to the farmer that has been charged.

Maynard said the farmer is Amish and moved to the community from outside of London, Ont., in April 2018 because land was more affordable.

She said the rural municipality had no idea the endangered orchid was on the land.

“They were moving a fairly large family over, about 40 family members, not all of them are here yet, but they are still purchasing some private properties and relocating here,” said Maynard in an interview with CTV News on Monday.

“So they came here to see in the municipality if had some land for sale and we did have some, and we thought it would be great to welcome new people to the area and expand our population.”

Maynard said the farmer was charged in June 2019.

“It was a bit surprising I guess, to say the least, that the Endangered Species Act restricts on private property that wasn’t something we had considered, so we do feel it’s unfair especially to a famer who is trying to make a living off the land, and I guess an Amish farmer at that,” said Maynard.

“They are doing everything without modern technology, so really it seems the most environmentally friendly way to farm, and here they are restricted in how they can farm their land.

“It sounds like the orchid doesn’t grow in a nice square spot. It’s random. Here, there, everywhere. So if he’s always having to go around this and especially with horses and a plow, it’s easier to steer something with wheels or a track, to coordinate horses, that’s got to be more difficult.”

Possible impacts beyond one farmer: KAP

Kevin Stott is a farmer and a board member with Keystone Agricultural Producers.

He said although the farmer was told not to cultivate, the situation could be handled differently.

“First of all give some timelines, or a compensation fee, or a smaller area,” Stott said.

Stott fears if this can happen to one farmer, it could happened to any farmer in Manitoba.

He doesn’t think the burden of saving a species should be on one landowner, it should be shared. He said there could be another species that could prevent a farmer from working their own land.

Maynard said last fall, when work stoppage orders were given to four farmers, the R.M. was told 40 farmer could be affected.

The Nature Conservancy of Canada has been working for decades to protect the endangered orchid.

Cary Hamel, director of conservation for Manitoba, said the non-profit bought 10,000 acres of land in the area because the land has some of the largest blocks of tall grass prairie left in the country.

He said there are more than 20 species, including the orchid, that depend on this habitat.

“It’s tricky, it’s hard. We get people in the room. We get scientists, conservation professionals, and farmers, and we essentially come up with prescriptions with how to best have a strong local economy and lots of orchids,” said Hamel.

Rick Askinis is the president of the Native Orchid Conservancy Manitoba Brand. He said the group supports the province enforcing the Endangered Species Wct.

“Western prairie fringed orchid is listed as endangered in Canada and the largest population in the world is located near Stuartburn all within a 50 kilometres-squared area,” said Askinis.

The area that the WPFO grows in is marginal farmland at best and once the land is plowed and worked the destruction is forever. Less than one per cent of the tall grass prairie is preserved. It is our most endangered ecosystem and our most endangered orchid.”

The R.M. said what the Native Orchid Conservancy has protected is great, but wants private landowner to decide what happens to their land.

“I think nature conservancy owns a lot of land in the R.M. The orchid does grow on that land along with tall grass prairie, and to me that’s the perfect place to leave that environment for them, and allow the farmers to farm their land,” said Maynard.

“Leave the private landowners to do what they want to do with their land.”

The lawyer representing the farmer charged sent a letter this summer to Sustainable Development and Manitoba Justice with statements from several of other municipalities and farming groups.