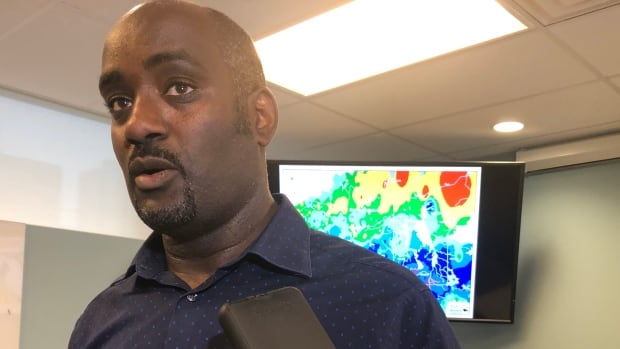 The floodway will be put to use under a rule that allows summer operations, provincial flood forecaster Fisaha Unduche said. It’s never been used in the fall before. (Bartley Kives/CBC)

The Red River Floodway is being put to use in fall for the first time ever.

The province announced Wednesday it plans to begin raising the gates on the floodway control structure at about 7 p.m. in order to control river levels within the City of Winnipeg.

On Wednesday afternoon, the Red in Winnipeg has risen to 14.1 feet above normal winter ice level at James Avenue, the highest recorded level for the river in the fall since Environment Canada records begin in 1970.

With 60 to 100 millimetres of more precipitation expected in the Red River Valley over the next few days, the province intends to use the floodway to prevent the river from rising higher than 14.5 feet James, provincial flood forecaster Fisaha Unduche told reporters at a news briefing.

Without the floodway, the Red would crest at about 16.2 feet, he said.

The Red is expected to crest between Oct. 17 and 20, Unduche said.

The floodway will be activated under a rule that permits its use in the event of what is technically a summer flood — a fast-developing event induced by heavy rainfall.

The floodway has never been operated in the fall before. The latest in the year it has ever been put to use was between July 4 and Aug. 4, 2002, the province said.

Unduche said the province wants to reduce the city’s reliance on flood-pumping stations. The City of Winnipeg has already activated pumps because of high water levels.

The risk of combined-sewer backups in Winnipeg increases when river levels are high.

Unduche said there is little risk of the Red or its tributaries overflowing its banks. He also said it’s too soon for the province to be concerned about a spring 2020 flood.