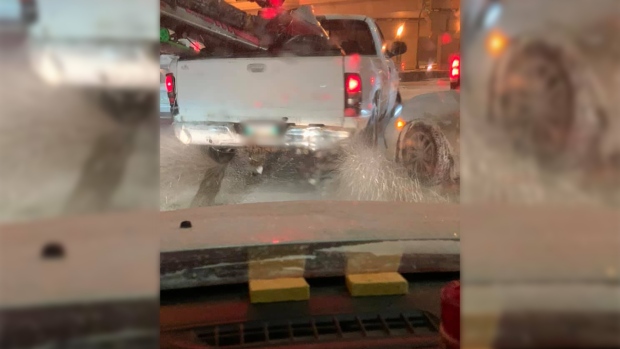 WINNIPEG — A road rage incident that took place in Winnipeg over the weekend has left multiple cars damaged.

On Sunday, Sydney Bewski was waiting at a red light on the corner of Stradbrook Avenue and Queen Elizabeth Way when she said a truck sped past her, turned around and charged towards her and the other cars waiting at the light.

“I got rear-ended, so I was about to get out of the car,” said Bewski. “Then he did the damage (on the side of my car) where the wheel well is, then he pushed my car and sideswiped me.”

Bewski said the driver of the truck wasn’t done, he got in front of her and reversed into the front end of her car.

“I was blank, I was like, ‘I can’t do anything about it,'” Bewski told CTV News.

She said the truck had a large skidoo sitting in the back of the cab.

“I was just looking at the skidoo being like ‘please don’t fall off,’ it would have took off my head.”

Bewski said the driver sped off southbound down St. Mary’s road. Shortly after, Bewski spotted the skidoo that was in the back of the truck abandoned on the side of the road.

Const. Rob Carver with WPS confirmed police are investigating a report of a stolen truck on Sunday evening that may have been involved in a number of collisions, but couldn’t confirm any more details.

Bewski said she was given a new incident number on Tuesday. Carver said new numbers are given when police see a common thread amongst different incidents.

“Whether it’s a vehicle or a suspect or something where we think they may be connected, we link them under a master number,” said Carver.

Bewski said the incident left her with minor injuries. She said she believes what happened was criminal and sinister.

“I’ve seen high-speed chases, they dodge cars. Him, he was like ‘I’m hitting every single one of you and I’m going to keep doing it.'”