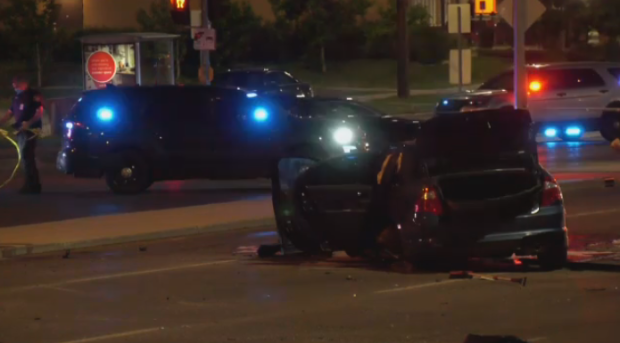 WINNIPEG — Several people were taken to hospital Thursday night after what police described as a serious crash on Henderson Hwy. near Chief Peguis Trail.

Winnipeg Police Service said officers were called to the scene at 7:55 p.m.

Police said a female driver had been heading west on Chief Peguis Trail. They said as she turned north onto Henderson Highway, her vehicle hit an oncoming northbound vehicle being driven by a male, pushing it into the southbound lanes of Henderson, where it caught fire.

Police said that’s when a witness jumped into action, grabbing a fire extinguisher from their vehicle and putting out the flames.

The male driver was taken to hospital in unstable condition.

The female driver and all four passengers – including 2 children – were taken to hospital in stable condition.

Police said speed is believed to be a factor in the crash.

The intersection was closed to traffic. Police said it would not reopen until they received an update on the male driver in unstable condition.

There was no word on any charges Thursday night.