A Winnipeg man and his daughter are questioning the decision of police to open fire on a getaway vehicle as it sped toward them in an open intersection.

“To me it just feel like they disregarded public safety,” said Vincent Curci, 29.

Curci and his 10-year-old daughter were heading home from her cheerleading practice, travelling east on Nairn Avenue toward Lagimodiere Boulevard on Wednesday evening at around 8:45 p.m. As they approached the intersection of Nairn and Panet Road, Curci noticed police had a white car pulled over, on the north side of the intersection, in the southbound lane of Panet..

The light was green, but he slowed down because he was curious about what was happening, he said. The suspect vehicle was pulled over on the right side of the road with a police car behind it, he said, with two police cars along its left side and a police car positioned horizontally in front. 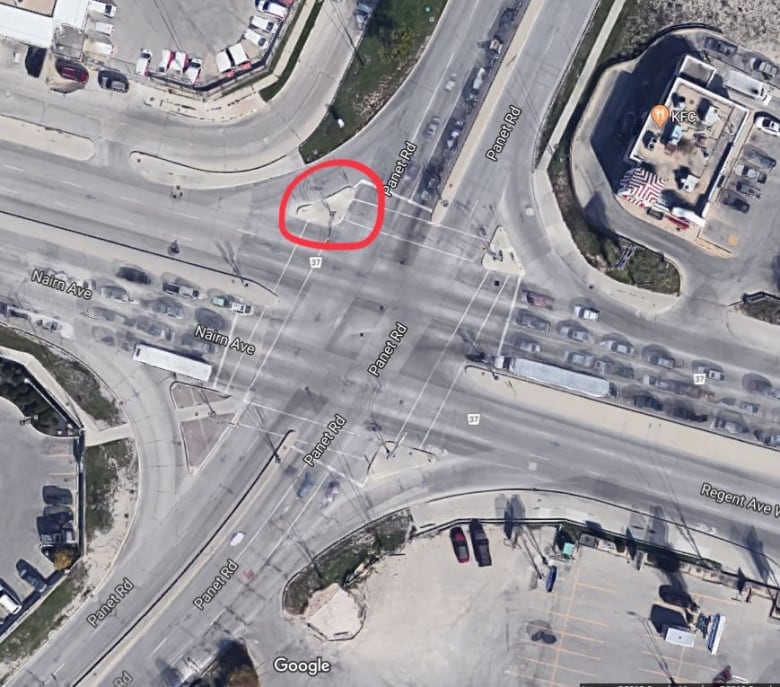 Curci was travelling east on Nairn Avenue when he saw officers had surrounded the suspect vehicle on three sides alongside the circled traffic island. He says the car jumped its curb to circumvent police before they opened fire. (Google Maps)

“One of the cops goes to smash out the window and I guess, failed attempts, and at this point the car goes to go around, he hops the little curb to go around the cop. I didn’t see him hit the car, there was no cops in front of him, and then that’s when they opened fire on him,” said Curci.

When Curci saw the car coming toward him, he gunned it through the intersection.

“I just quickly pushed my daughter into the back side of the seat and sped through.”

Although Curci, his daughter and the truck were unscathed, the weight of the situation hit him later.

A Winnipeg man and his daughter are questioning the decision of police to open fire on a getaway vehicle. 1:27

“What ticked me off about it is, to me, I just felt there was disregard to the safety of the public. To me it just felt like they didn’t see us coming through or they were just determined to get this guy off the street,” he said.

What Curci witnessed was the second encounter Winnipeg police had had with that particular vehicle Wednesday evening.

According to Const. Rob Carver, general patrol officers had been called around 8:35 p.m. to McLeod Avenue and Raleigh Street about an assault with a weapon. They gave chase when the car sped away, then abandoned that chase, due to the “threat to public safety,” said Carver.

“Due to the reckless and dangerous speeds of the suspect vehicle, that pursuit was aborted,” said Carver.

Other police units were called in and converged on the suspect car at the intersection of Nairn Avenue and Panet Road in East Elmwood, which is what Curci and his daughter saw.

“At this point, officers discharged their firearms to stop the threat of bodily harm, death to them or other officers,” he added.

The car travelled down Panet and was eventually stopped at Marion and Archibald Street.

Two men and a woman were arrested, including one man who was suffering from a gunshot wound, Carver said. The man was treated in hospital and taken into custody.

Carver could not say, however, if that man was the driver of the car or if his injury was from an officer’s gun. Nor could he say how many officers fired their weapons and if they were shot at. The incident is now being examined by the Independent Investigation Unit of Manitoba, which looks into all serious police-related matters.

“I have to deal with my daughter trying to deal with this stuff, I don’t know what she’s going to go through, but I’ve never dealt with something like this,” said Curci.

He hasn’t heard from police yet, but expects that they will contact him in the coming days.

He admits he probably shouldn’t have slowed down to see what was going on when he saw the car pulled over at Nairn and Panet Road. And he respects that police have a job to do.

“The amount of shots we heard fired, to me, that was a little excessive.”