‘The air-taxi sector continues to have more accidents and more fatalities than all other sectors of commercial aviation combined,’ said Transportation Safety Board Chair Kathy Fox at a news conference in Ottawa Nov. 7. (THE CANADIAN PRESS)

Small-aircraft operators in Canada have fallen into a trap of accepting too many safety risks and it has to stop before more people are killed or injured, the Transportation Safety Board warned Thursday.

But over time, many have become complacent about the safe operation of their aircraft as they come under pressure to cut costs, Whitney said, as the board released its findings from an investigation of the industry launched in May 2015.

The investigation looked back on 15 years of data.

‘Gradual drift that occurs over time’

“I’m not talking about flagrant rule violations,” Whitney told an Ottawa news conference. “I’m talking about a gradual drift that occurs over time with every successful, though not necessarily safe, flight.”

The board analyzed more than 700 incidents that occurred between 2000 and 2014, involving aircraft used to ferry a small numbers of passengers — everything from helicopters used by utilities to fixed-wing turbo-prop airplanes that service some of the most isolated regions of the country.

Over the years, investigators have released 22 recommendations to Transport Canada on how safety can be improved on such aircraft, including implementing seat belts with chest harnesses and ensuring the availability of safety belts designed for children.

Just last month the safety watchdog called for clearer regulations around seatbelts as a result of its investigation into a 2017 crash in eastern Ontario that killed four men who were in a Hydro One helicopter. 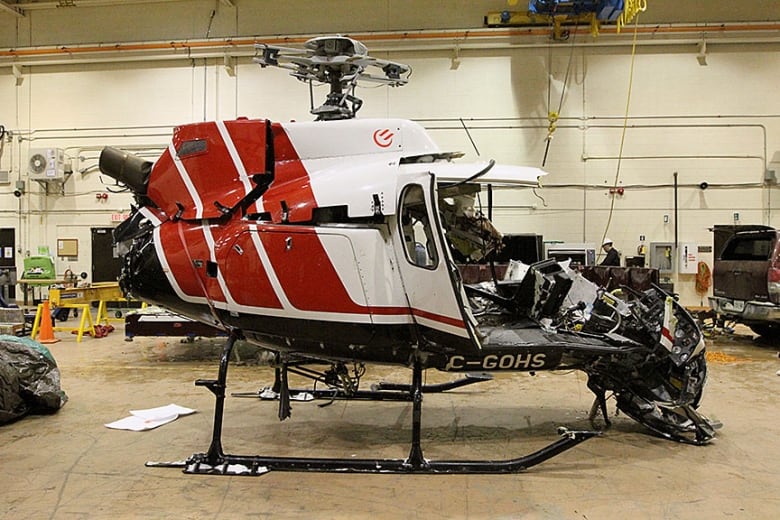 The wreckage of the Hydro One helicopter that crashed in 2017, killing four people. (Transportation Safety Board of Canada)

More fatalities than all other sectors

The TSB issued four new recommendations Thursday, including a call on Transport Canada to educate pilots and service operators about the risks of accepting unsafe practices.

All too often, aircraft operators facing economic challenges put pressure on pilots to fly under unsafe conditions, such as flying overweight or with minimal fuel reserves, or by delaying scheduled maintenance, said TSB chair Kathy Fox.

“Although these vital air links have helped build Canada and sustain its population, air-taxi operations are at higher risk,” said Fox. “The air-taxi sector continues to have more accidents and more fatalities than all other sectors of commercial aviation combined.”

The TSB also called on industry associations to share tools and data that can be used to implement best safety practices. Investigators found a wide array of safety standards have been adopted by air-taxi operators across the country, with some going above and beyond current safety regulations while others comply with the bare minimum.

Transport Canada should review the gaps in safety standards to ensure they are up to date, the board said. It also called on the government to require all commercial operators to report aircraft data, such as the number of hours flown, to better calculate accident rates and ensure that current safety strategies are working.

Transport Canada has 90 days to respond to the TSB’s recommendations.