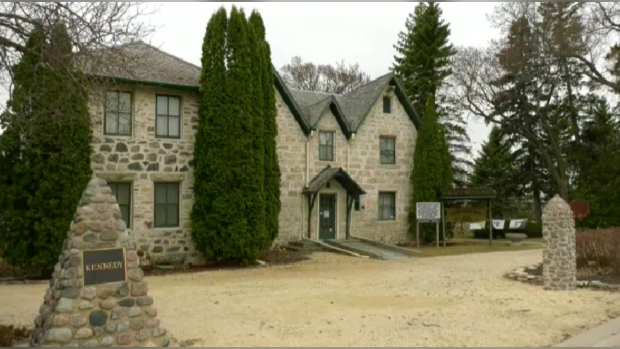 WINNIPEG — A residents’ group in the R.M. of St. Andrews is calling on the provincial government to restore one of the community’s oldest buildings.

Captain Kennedy House, a stone mansion nestled on the banks of the Red River, was built in 1866. The house’s namesake, Captain William Kennedy, was a Métis explorer best known for commanding two expeditions to search for Sir John Franklin in the Arctic. Kennedy later served as an Anglican missionary and Hudson’s Bay Company employee in Lower Fort Garry.

Kennedy House is owned by the province and was designated a heritage site in 1989. But the building, which housed a museum and tea room, closed its doors in 2015 because of structural problems.

Lois Wales, co-chair of the Kennedy House Renewal Committee, said the landmark attracted about 4,000 visitors a month before the closure.

“It was a big economic boost for the area,” Wales said of the tourist attraction. “It employed students and other people. It kept the building open.”

When Kennedy House closed, Wales said the community was disappointed. The NDP’s 2015 provincial budget included money to pay for the repairs—namely, funds to shore up the house’s first and second floor. The following year, Pallister’s government removed the funding.

“We were really anticipating the [2015] budget and the repairs to the building, and it’s just never happened.”

Wales said Manitoba Conservation continues to maintain the grounds, which includes a large garden, but Kennedy House has been locked since the initial closure.

In 2018, a petition to save Kennedy House gained over 3,000 signatures and in March 2020, Kennedy House Renewal Committee presented the R.M. of St. Andrews Council with a detailed proposal to reopen the building.

“We gave full support to this very dedicated committee,” Sul said. “They presented a very obtainable business plan which would create employment, bring back tourists, and ensure Captain Kennedy House would be sustainable.”

The committee’s plan is contingent on government funding. Wales said initial repairs would require approximately $200,000 to fix the foundation. The work would bring the building up to code and allow Kennedy House to reopen. Wales added additional work could be completed throughout the following years.

She envisions Kennedy House running similar to St. Andrews Rectory, a Canadian National Historic Site just down the street. The Rectory is owned and funded by Parks Canada, but programming and maintenance are managed by the R.M. and a citizen’s board.

Wales said a revitalized Kennedy House would increase tourism on the River Road corridor, but more importantly, educate visitors on the “remarkable history” of Captain Kennedy, his house, and the area.

“We need the government to step up with the funding,” Wales said. “Let’s get this building fixed and share the history with other Manitobans.”