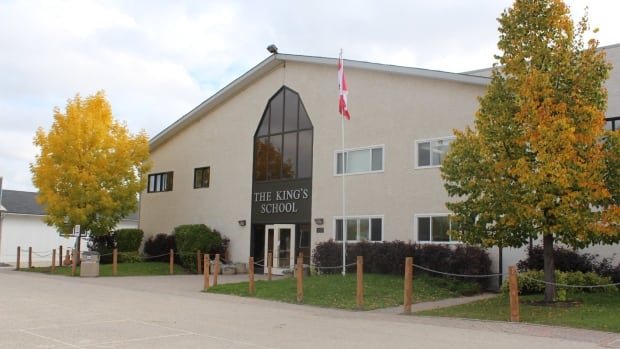 A private Christian school in Winnipeg has placed one of its teachers on leave while an investigation is conducted into the teacher’s conduct at school.

The move follows allegations of inappropriate behaviour that were made earlier this year about the teacher at The King’s School — a school on Panet Road in northeast Winnipeg that is affiliated with Gateway Church — the school’s board chairperson says.

“The person accused has been temporarily removed from the school and an independent, third-party investigator was retained in February by the school board,” chair Andrew Frank said in a statement to CBC News.

Danielle McNab was a student at The King’s School, which offers classes from preschool to Grade 12 and has 300 students, according to its website.

She attended King’s from kindergarten to Grade 11, and then went to a public school.

The board chair’s statement is “almost disheartening to hear,” McNab said.

She says she complained to another teacher at the school in 2018 about the teacher who is now on leave. She’s critical that the school didn’t act sooner.

The teacher “would come up to us in the hallways and … hug us for like 30, 40 seconds straight,” McNab said. He would also “massage our shoulders and … be really close in proximity to us all the time.”

It was “weird and uncomfortable,” she said.

After she and a friend talked to another teacher about the problem, things didn’t go well for her, she says.

“After that, everybody was kind of like making us feel bad about it. And so then we just kind of shut up.”

The teacher’s actions prompted McNab to file a complaint with police around the beginning of May this year.

Krista Gerbrandt is a parent whose two children attended the school until the family decided to pull them out last year and send them to a public school instead.

She also thinks the school should have acted sooner on complaints about the teacher.

“You can say you care about the kids’ safety all you want, but the proof is in the pudding,” said Gerbrandt.

“It makes me very sad and upset that this institution that I gave so much of my life and my time and my money to is behaving this way,” she said.

Frank said the school’s protection policy outlines a series of actions that are to be taken in the case of an allegation coming forward.

“We take the safety of our students seriously and have policies in place that guide our response” to the situation, the board chairperson said.

The investigator looking into the teacher’s conduct “is in the process of investigating any allegations that come forward present or past,” he said.

“Given the ongoing investigation, and until any conclusions are known, it is inappropriate to comment on details at this time.”