Solomon Harper, centre, from St. Theresa Point First Nation in northern Manitoba, rehearses for Outside Looking In, a dance program that’s changed his perception of the world, his commitment to school, and his dreams for the future. (Jackson Weaver/CBC)

Grade 10 student Solomon Harper is slick with sweat, sprinkled in dust and roughly 1,500 kilometres from home. He’s surrounded by farm animals, the loud and anxious voices of more than 100 teens both older and younger than he is — and he couldn’t be happier.

“The performance today is really exciting, but … first-year [attendees are] usually nervous,” Harper, 16, said during a break from what seem like unending rehearsals.

Harper is a dancer with Outside Looking In (OLI), a non-profit dance program for Indigenous youth across Canada. He’s from St. Theresa First Nation, which is about 600 kilometres northeast of Winnipeg, and it’s his fourth year participating in the program. 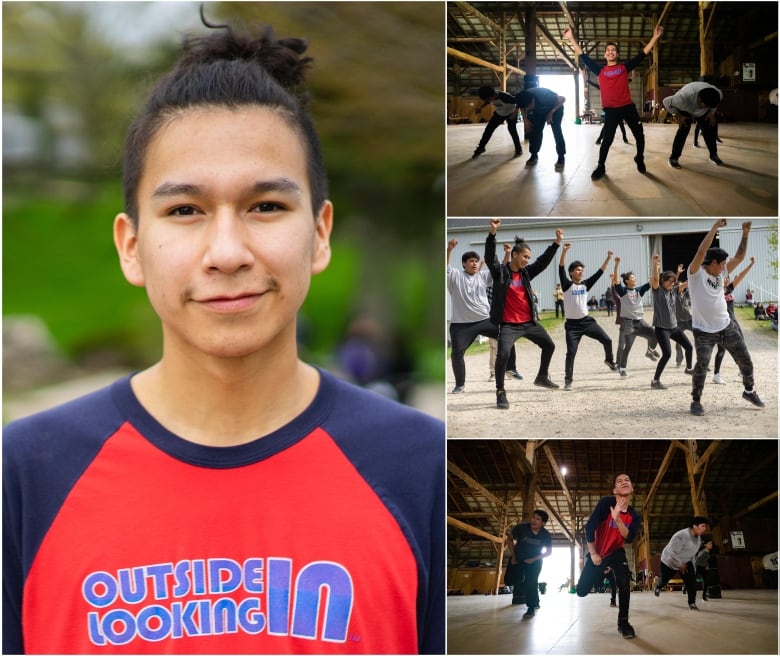 Harper and his fellow dancers have been practising up to six hours a day for the past two weeks. (Jackson Weaver/CBC)

Serving mostly on-reserve kids between the ages of 12 and 18, OLI offers high-school-accredited dance classes in what are usually remote fly-in communities.

At the end of the school year, a selection of dancers are flown to southwestern Ontario for 14 days to rehearse at a farm in St. George, Ont., a tiny community about 45 kilometres west of Hamilton. From there, they head to the Sony Centre for the Performing Arts in Toronto to dance in front of an audience of thousands. 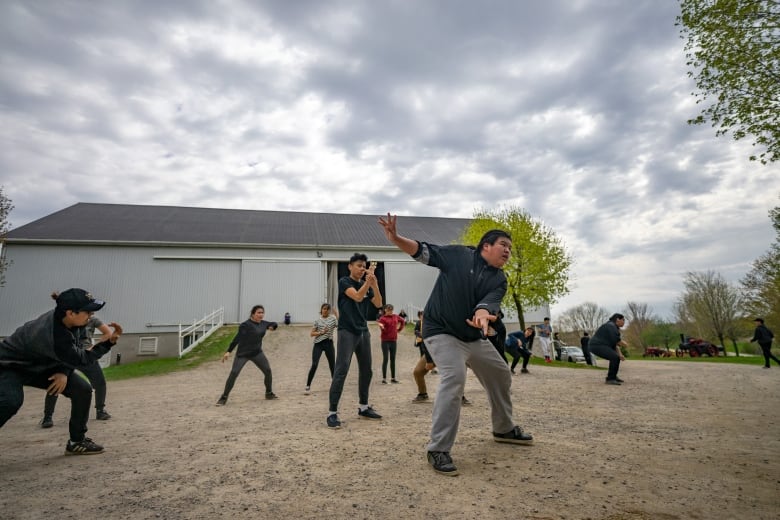 Most of the OLI dancers travelled to Toronto from communities that can only be reached by plane. (Jackson Weaver/CBC) 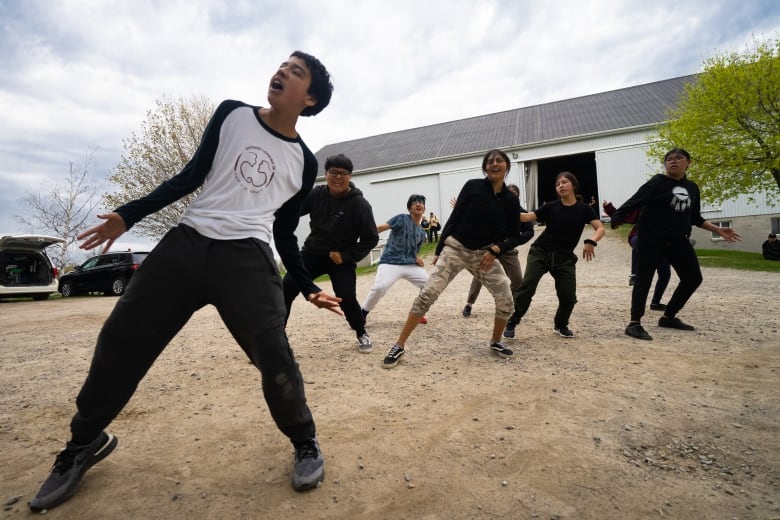 Harper says his experience with OLI has fundamentally changed how he sees his future. The program has helped him improve both at school and on the dance floor — and to make ambitious plans for himself.

He describes his younger self as a “slacker” when it came to academics, and someone who “wasn’t that good at dance.”

Outside Looking In requires all participants to maintain a grade average above 60 per cent. Harper says he now maintains grades in the 80s and 90s. He also dreams of becoming both a lawyer and a professional choreographer.

“It made me a hardworking person, so that’s what I think OLI is for,” Harper said.

“With school, I want to be the best, too. I want to be higher than anybody [and] try to feel better about myself.” 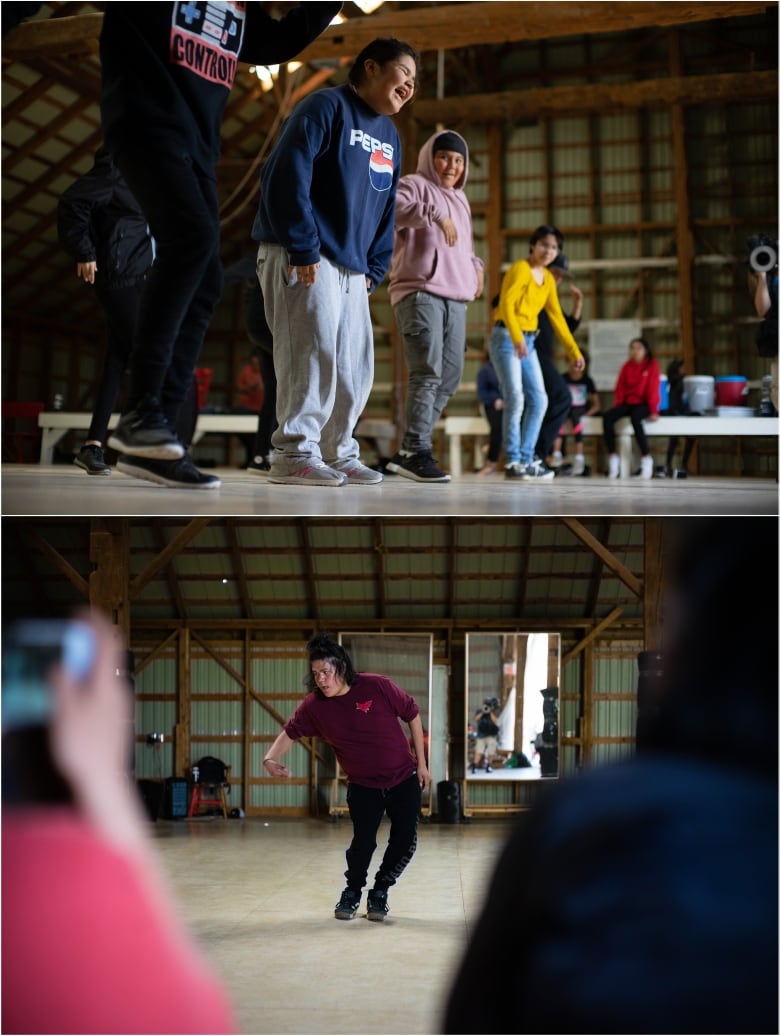 To participate in the program, OLI dancers need to maintain certain grades in school. While they’re in St. George, they spend every day both practising dance and doing homework. (Jackson Weaver/CBC)

Other dancers also spoke of having transformative experiences.

Rayna Fontaine, a Grade 12 student from Garden Hill First Nation in northeastern Manitoba, is in her fourth year with Outside Looking In. The experience has been a roller coaster of emotions, as well as a lifeline during some tough years. 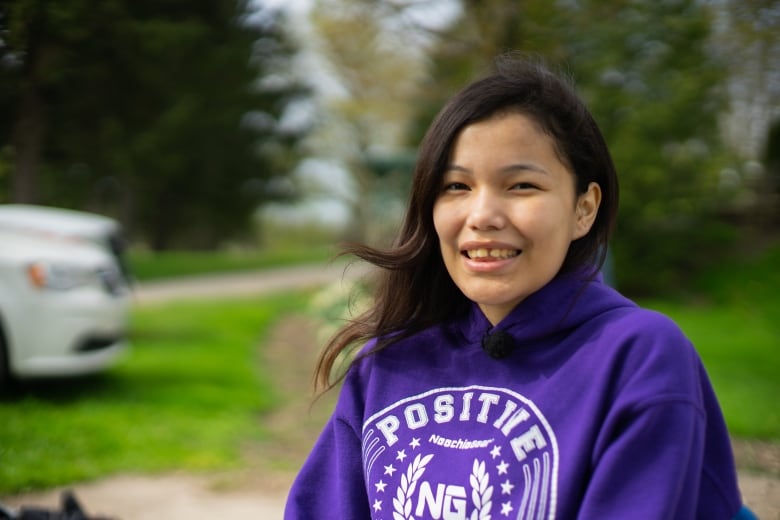 Rayna Fontaine says she doesn’t often get the opportunity to express herself onstage when she’s at home in Garden Hill, Man. (Jackson Weaver/CBC)

After the excitement of her first performance, Fontaine felt much calmer the second time.

In her third year, however, the feeling of excitement returned and brought her to tears. She felt overwhelmed by being given the opportunity to perform and express herself onstage — something she says rarely happens at home.

Fontaine, who’s now 18, struggled with a “deep sadness” in her early teens, but said dance has helped her work through it. 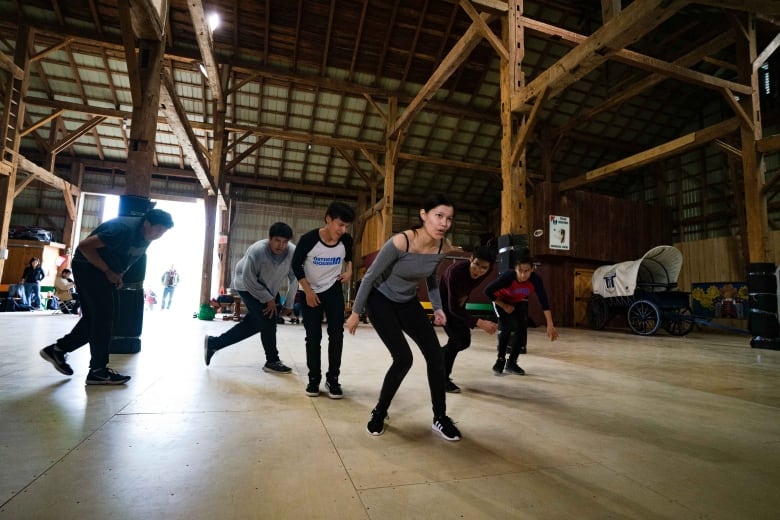 Fontaine, centre, performs in five different parts of Outside Looking In’s 2019 show. Although it’s hard, she said the structure and opportunity has been very helpful to her. (Jackson Weaver/CBC)

Before the program, she said she had a simple routine: “‘Go home. Play games. Lay in bed. Sleep. Clean up.’ That was all.”

But OLI gave her the opportunity to learn, develop and polish a dance routine all year long before eventually performing it in front of a large audience. It’s been exciting and fulfilling, and has given her a sense of purpose.

“It was just a learning experience, and that’s very emotional for me, because I was able to get through what I was going through at the time.” 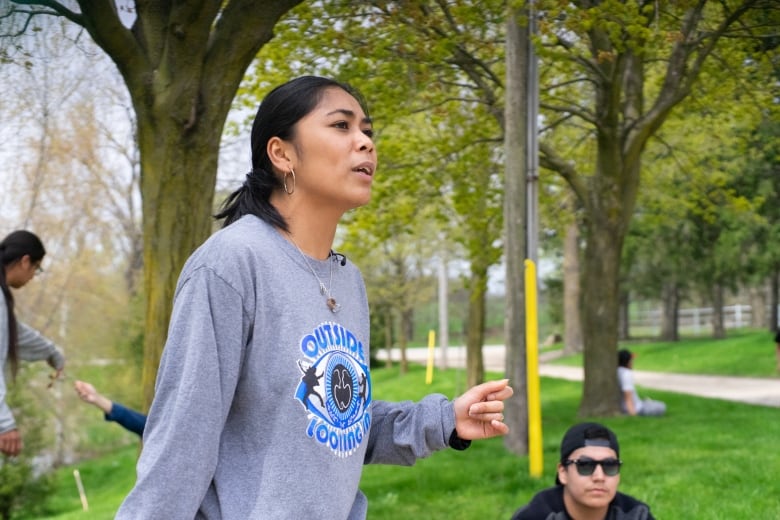 Toronto choreographer Queenie Seguban has seen first-hand how important a program like OLI can be for Indigenous students.

Seguban has taught classes in facilities without heat, and in communities under boil-water advisories where a case of 24 water bottles costs nearly $100. 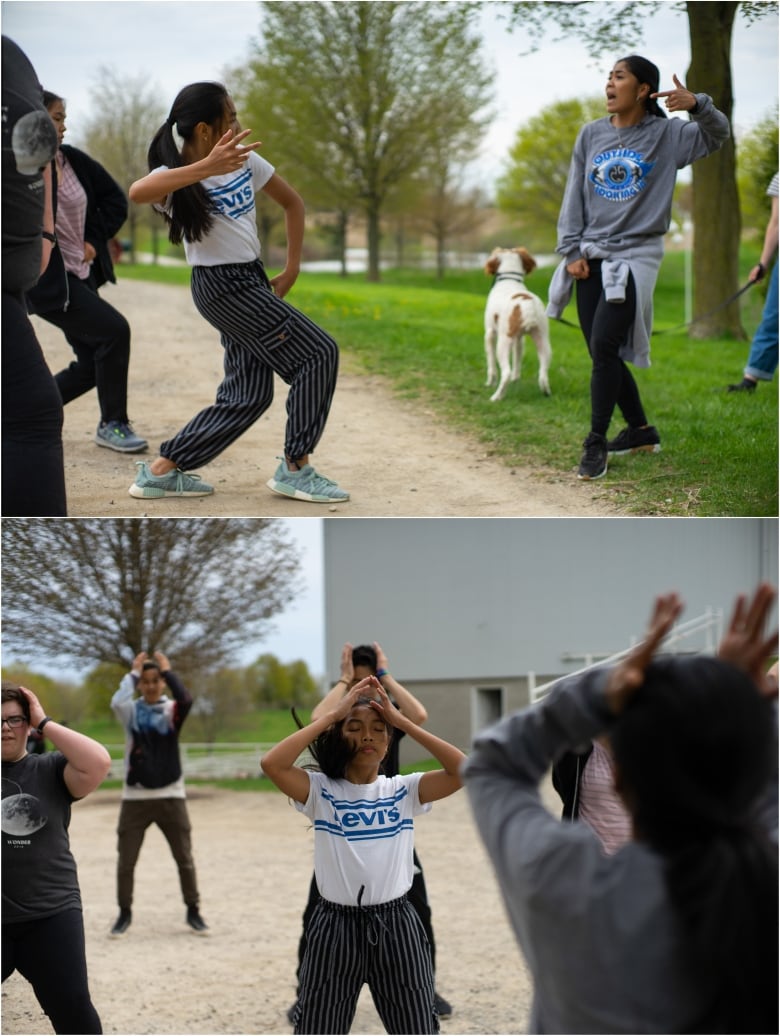 Seguban says her main goal is to connect with the kids in her groups, and help them become confident and comfortable performing in front of others. (Jackson Weaver/CBC)

“It’s not always negative in First Nations reserves, but [these conditions] do exist, and it’s very extreme,” Seguban said.

“[It] gives me more of a reason to keep coming back, because I do know that dance provides some sort of joy and happiness and escape for some of these kids.”

Seguban’s primary goal is to bring students out of their shells — a skill she’s had to refine in her years with OLI; many of the dancers enrolled in the program have never performed onstage before. Even during rehearsals, many are soft-spoken and shy. 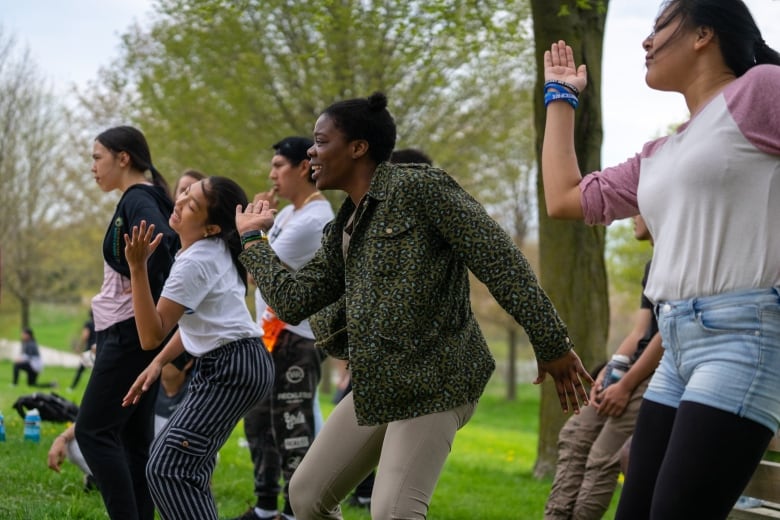 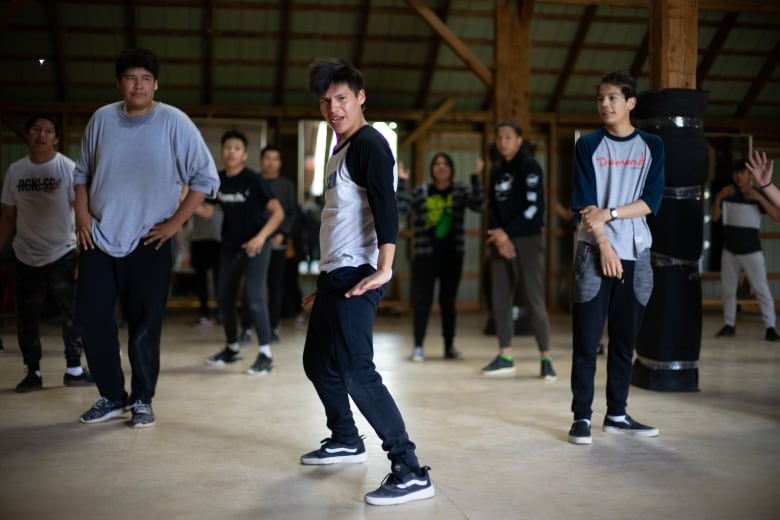 Often, it’s only when they’re onstage in Toronto that Seguban sees them truly blossom as performers.

This year, that transformation took place on Thursday, when the dancers performed to a nearly full house at the 3,191-seat Sony Centre for the Performing Arts. 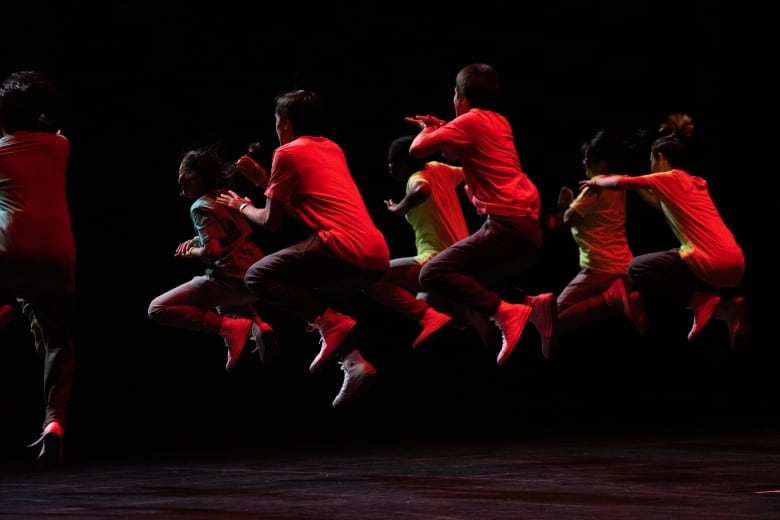 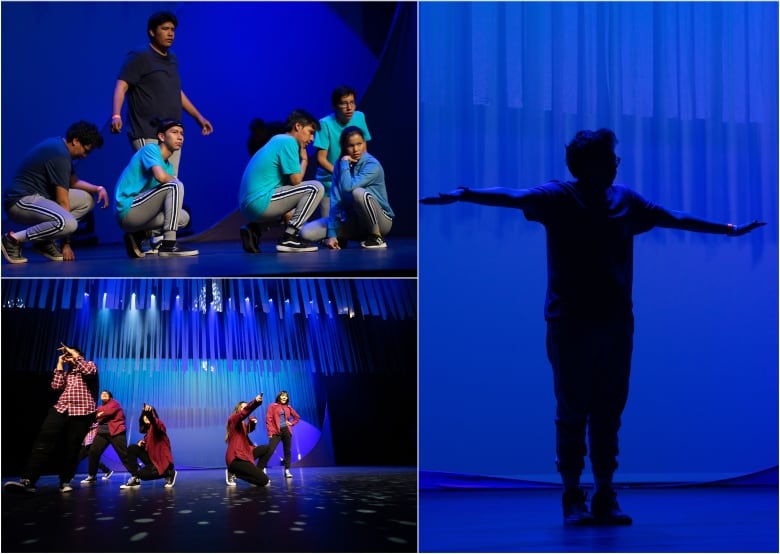 114 dancers from 12 communities across Canada came together Thursday to perform two shows for an audience of nearly 3,000 at Toronto’s Sony Centre for the Performing Arts. (Jackson Weaver/CBC)

“That’s the moment where it finally ends, where we take a bow, and then confetti everywhere,” said Harper, the program veteran from St. Theresa Point First Nation.

“Everyone’s hugging and crying, because they can’t believe they’ve done this.” 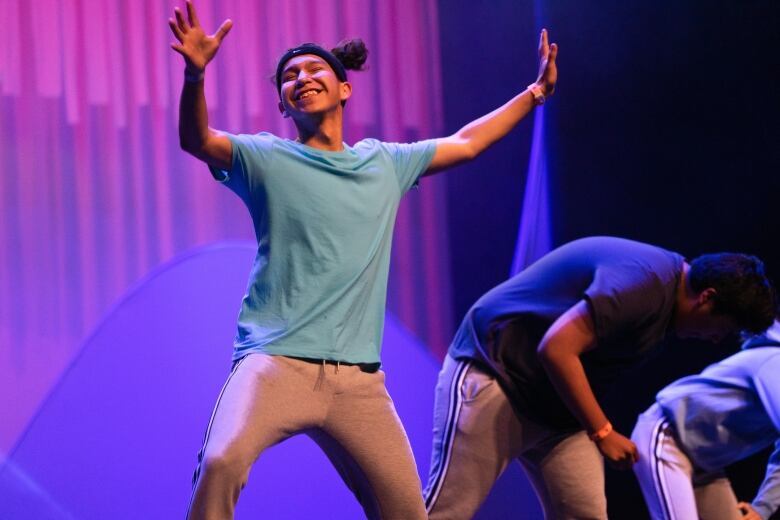 The opportunity to see different parts of Canada, push his limits, and dance for crowds in the thousands makes Harper feel incredibly proud.

And he hopes it won’t be his last time onstage.

“I’m just going to enjoy it while I’m here, so when I go back home, I think I’m going to strive for more again. And hopefully come back next year.” 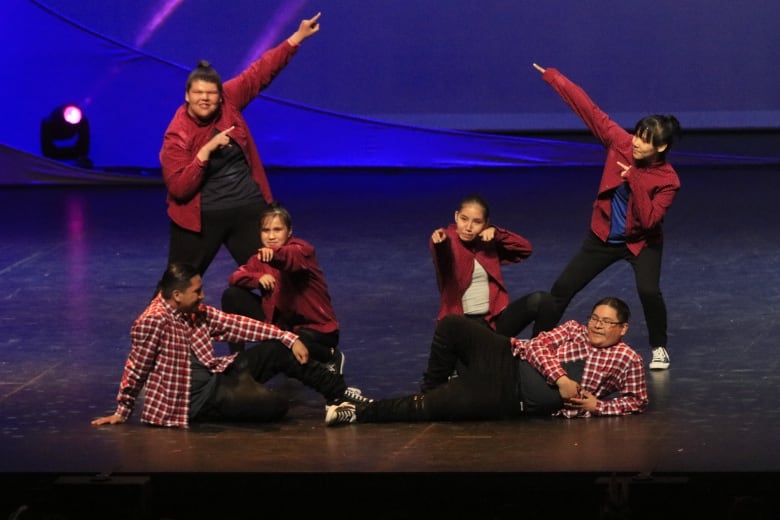 Outside Looking In dancers during a matinee performance in Toronto on Thursday. (Richard Agecoutay/CBC)