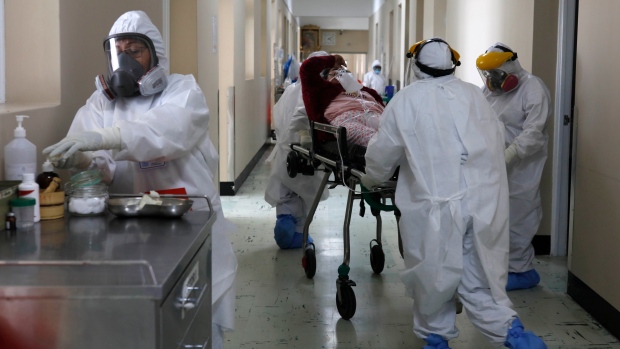 TORONTO — A recently designated COVID-19 variant of interest by the World Health Organization is coming under scrutiny as more cases are being detected in multiple countries, and amid concerns that it carries mutations that could potentially make it more resistant to neutralizing antibodies.

The newly labelled Lambda variant, or C.37, was first detected as early as last August 2020 in Peru and was being monitored as an alert for some time prior to its new designation. As of mid-June, the variant had been detected in 29 countries or territories with a particularly high prevalence in South America.

“Lambda has been associated with substantive rates of community transmission in multiple countries, with rising prevalence over time concurrent with increased COVID-19 incidence,” the global health agency wrote in its Weekly Epidemiological Update published on June 15.

“Lambda carries a number of mutations with suspected phenotypic implications, such as a potential increased transmissibility or possible increased resistance to neutralizing antibodies.”

The WHO said there was currently limited evidence on what the impact of these mutations will mean and that further studies were necessary to better understand how to contain the spread and how the vaccines will hold up against the variant.

WHO virologist Jairo Mendez-Rico told Germany’s Deutsche Welle there were no indications thus far the lambda variant is more dangerous or leads to higher mortality.

TRACKING LAMBDA AROUND THE WORLD

Pablo Tsukayama, a virologist with Lima’s Cayetano Heredia University told the German broadcaster that given Peru’s struggles with the containing the pandemic, it was not a surprise that the variant started there and has now taken hold.

The South American country has experienced more deaths per capita than any other country since the start of the pandemic, with 586 deaths per 100,000 people as of July 5. It is a figure that is almost 89 percent higher than Hungary, the second-worst country by the same measure, with 310.5 deaths per 100,000. Now, more than 80 per cent of new infections sequenced since April in Peru are associated with the Lambda variant, according to Peruvian authorities.

About a third of new infections in Chile over the last two months were also found to be the Lambda variant — circulating at about the same rate as the Gamma variant, first detected in Brazil.

In the U.K., Lambda was designated as a Variant Under Investigation (VUI) on June 23, after half a dozen cases were identified across the country. That number now stands at eight. Public Health England (PHE) say there is currently “no evidence that this variant causes more severe disease or renders the vaccines currently deployed any less effective.”

As of July 5, there are no known reported cases of the Lambda variant in Canada, though publicly available data focuses on variants of concern.

While there is still little research on the Lambda variant, Brazilian researchers wrote in a pre-print study, which has not yet been peer-reviewed, that they believe it has “considerable potential to become a VOC (variant of concern),” while another pre-print study suggests that this variant is more transmissible than the Alpha and Gamma variants, and that CoronaVac, also known as the Sinovac vaccine, was less effective against it.